A Journal Review by Robert Glass

The issue of the cultural, social and spiritual significance of food and dining in a nation is not a topic that I have ever given systematic thought to, even though I have had on my bookshelves since November 1988 the book More Than One Way, Learning About Other Cultures Through Food, written by Margaret Thodey and her colleague Felicity O’Brien (Sydney, Shakespeare Head Press). In that book, recipes from England, Germany, Greece, Italy, India and Vietnam are preceded by long sections addressing the question ‘What influences the food of each country?’ I should have not have been surprised, therefore, that an Irish Studies scholar should be able to assemble 289 pages of papers discussing the symbolic, social and spiritual significance of food and dining in Ireland, as Rhona Richman Kenneally and and co-editor Máirtín Mac Con Iomaire have done in this special issue of the Canadian Journal of Irish Studies. The Journal is a fascinating read, because 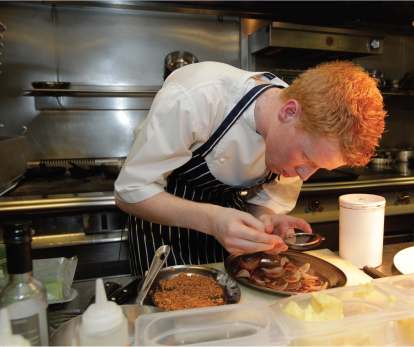 The last fifty of its 339 pages are a series of book reviews. Whether intended by the editors or not, several of these reviews indirectly cast light on the earlier papers. The first review by Brian Murphy of ‘A Wine Goose Chase’, for example, provides data on the growth of wine consumption in Ireland (from 1.7 million cases in 1990 to nearly nine million cases in 2007), which supports the thrust of Mark Moriarty’s personal reflections and Máirtín Mac Con Iomaire’s placement of the Irish Food Renaissance in the context of the Celtic Tiger (pp. 58-73), though it is important to note Mac Con Iomaire’s point that that period was ‘both good and bad for chefs’ with people being promoted beyond their capabilities. Similarly Francis Carroll’s review of two books on Irish foreign policy in  the inter-war years: Gerald Keown’s First of the Small Nations, covering the period 1919-1932, and Aengus Nolan’s Joseph Walshe (1922-1946) suggest some reasons (e.g. the struggle of the new Irish state for international recognition, and cut backs in the budget for the Irish Department of Foreign Affairs) as to why it might have been ‘inconceivable’ in the 1930s that Irish diplomatic dining was not reflected in and on its state table  (Elaine Mahon’s conclusion on p. 148).

Writing about Seamus Heaney, Eugene O’Brien observes that ‘food has a significant place in our cultural lives as human beings…and it is the cooking of food that is significant from a cultural and mythical perspective’ (p. 273). All the papers in CJIS, Volume 41 demonstrate the validity of this point, though it is important to note that the experience of food and cooking may be ‘positive’ (as in Mark Moriarty’s restaurant, or Seamus Heaney’s mother’s kitchen) or ‘negative’ as in the rituals of fasting explored by Marjorie Deleuze (pp. 226-249). Inevitably, perhaps (the subject is Ireland), Deleuze’s piece explores the influence of the Catholic Church, recently much diminished, as does Eamon Maher in his analysis of the links between the Eucharist and human flesh in Aidan Mathews’ Lipstick on the Host, Frank Mc Court’s Angela’s Ashes, and John McGahern’s Amongst Women, concluding that their treatment of food ‘for the body or the soul.. reveals perhaps an unconscious awareness of how influenced they were by the (Catholic) religious teaching they received at a young age, and which stayed with them throughout their lives’.

One piece that will be perhaps of general interest to Tinteán readers is Helen O’Connell’s examination of the two papers written by William Wilde (Oscar’s father) for the Dublin University Magazine in February and March 1854 on the food of the Irish. Wilde linked the diet of the poorer Irish in the 1830s and 1840s to the famine, and O’Connell argues that ‘The Food of the Irish’ ‘merits sustained analysis for its explicit and seemingly illogical equating of malnourishment with civility, progress, and in fact gastronomy, which Wilde equates with both “manners” and “morals”'(p. 158). Wilde’s essay is an extraordinarily insensitive set of arguments of a Malthusian kind, especially given Wilde’s profession (as a medical doctor) and his investment in folk culture. In assessing O’Connell’s paper, however, it is well to remember that, as Emer O’Sullivan implies in her 2016 work The Fall of the House of Wilde (p. 69), Wilde wrote the articles on Irish food on the run: ‘in 1854 William had (his medical study) On the Physical, Moral and Social Condition of the Deaf and Dumb published. And somehow he found time to write a two-part article on ‘The Food of the Irish”‘.

Many of the papers in the volume are ‘work in progress’ reports of research being undertaken by the individual authors for doctoral programs. Hopefully after the academic requirements are successfully met, the authors will succeed in having their results published as books – turning what editor Rhona Kenneally couches as ‘A First Course’, into mains and/or desserts.

There is an Australian connection in the book. In her article on Irish Diplomatic Dining (p. 135), Elaine Mahon refers to the entertaining in Dublin Castle of ‘important visitors such as the Prime Minister of Australia (1935), (and) ‘the Prime Minister of Tasmania’(1935). Tinteán readers will note the obvious diplomatic mistake. It seems that the mistake was Eamonn de Valera’s whom Michael Roe reports as having struck some chord with Ogilvie, leading to the exchange of ‘warm and gracious letters’. The mistake arose from a simple conflation of Australian official visitors to Dublin Castle:  Joe Lyons, then Prime Minister of Australia, and Albert Ogilvie, Lyons’ successor as Premier of Tasmania had travelled to England for the Jubilee of King George V. According to their biographers (Anne Henderson and Michael Roe), both cherished their Irish ancestry and were entertained at separate dinners at Dublin Castle in May 1935, Lyons early in the month and Ogilvie sometime after 16 May.

Directly or indirectly the papers in this volume cover many dimensions of Irish history, not just food. As such it is likely to be worthwhile and enjoyable reading for anyone with an interest in Irish history and culture. It has also been given sumptuous production values and is a joy to read – thick paper, high quality images, stylish layout. A tribute in its own right to Canadian Irish Studies.

Bob is an occasional contributor to Tinteán and has studied and worked professionally in Economics and History.