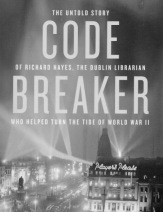 The names of people who work in government secret service are rarely known. The tragic figure of Alan Turing comes to mind: his work on the Enigma code was a state secret for more than forty years after the end of the war, but the same applied to everyone associated with Bletchley Park. In Ireland, our equivalent to Alan Turing, in his role as code breaker if not in the tragedy of his personal life, was Richard Hayes.

Hayes was the subject of a radio documentary on RTE in late 2017, written and presented by Marc McMenamin. This book is an expansion of that work, introducing an extraordinary man who deserves to be widely known. His day job was Director of the National Library of Ireland, a role he continued to fulfil while also working with Irish Military Intelligence (G2) from 1940 until the end of the war. 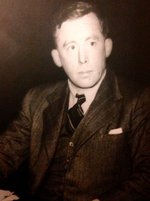 He was born in Abbeyfeale Co Limerick and grew up in Mayo and then in Dublin. He won a scholarship to Clongowes Wood College and later to Trinity, obtaining degrees in Celtic Studies, Modern Languages, Philosophy and Law, the first three simultaneously! But it was his interest in mathematics that would be the most important of his academic pursuits.

Throughout the war, agents were sent to Ireland from Germany with instructions to communicate with German military intelligence. They were to liaise with the IRA and report on that group’s preparedness to help the fight against the British; they were also expected to send weather information that would help the German air attacks on the British mainland. These reports would be enciphered, some using new techniques previously unbroken.

Richard Hayes broke most of these ciphers, a success that was known and appreciated by MI5 and the people at Bletchley. The author says that at the end of the war he was invited to a private meeting with Churchill during which he was presented with a medal on condition that the award would not be made public.

To give an idea of how little was known of the Irish code-breaking efforts during the war, consider the following: one of the three who worked with Hayes in his deciphering was Kevin Boland, a man who in his later years as a FF politician was widely mocked as little more than an old-fashioned fixer, a greaser of wheels. Even now, his Wikipedia entry makes no reference to his work as a code breaker. Another family peripherally involved was the Lenihans: an uncle of Brian Lenihan Snr was recruited by the Germans and trained to act as an agent, a role he did not in fact carry out.

As well as dealing with the work of Hayes and his co-workers this book gives a look at the tightrope act of de Valera in maintaining Ireland’s neutrality during the war. He had to persuade Churchill (who hated his guts) and German ambassador Hempel that Ireland was doing nothing that could be construed by either side as violating that neutrality. One of the ways he did that was his treatment of his former associates in the IRA, the first point of contact for any German agent in Ireland. After one successful operation to capture guns and ammunition from the Magazine Fort in the Phoenix Park, known IRA members were rounded up and interned in the Curragh, where they would remain for the duration of the war.

Much of the book concerns the efforts at espionage of a number of German agents like Herman Görtz, Werner Unland and Günther Schütz as well as local collaborators like Francis Stuart and his wife Iseult Gonne, Sean Russell, Frank Ryan, Caitlín Brugha and Helena Moloney. The German agents seemed to have little difficulty in moving about between safe houses in the Dublin area, in some cases forming relationships with local women.

The work of Richard Hayes was not confined to code breaking. He persuaded George Bernard Shaw to donate his manuscripts to the National Library. In 1945, he

embarked on a project that sought to acquire archival material and manuscripts relating to Ireland that were held abroad.   … In 1965, Hayes published his 11-volume Manuscript sources for the history of Irish civilization. The publication contained descriptions of Irish archives and manuscripts located in 678 repositories in over 30 countries. … He presented a copy of the work to President Eamon de Valera, and such was the esteem in which it was held that it was still being regularly consulted by students and academics to this day.

Although this book is a worthy and long overdue tribute to an extraordinary Irishman, it shows signs of hasty or inadequate editing. There are small nuisances like ‘pave away for …’, ‘teachta’ that should read ‘teachtai’ and a phrase like ‘the house was raided from top to bottom.’ There is considerable detail about a transmitter that was sending messages from the German legation, but it is not clear when it was removed or why that could not have been done earlier. Then there is the account of a spy named Simon who landed near Dingle and headed for railway tracks only to be told by locals that this line was no longer in use; one of those he met was a publican, ‘and he asked him back to his establishment. With a few hours to wait until the next train to Dublin, Simon thought this a welcome way to spend the time …’

These minor irritants do not take from what is an excellent read, the kind of book that is likely to send a reader to other accounts of how Ireland survived the war. But its main merit is that it brings to public light a man who is much more deserving of a statue or a street name or even a postage stamp than many of those who currently have that honour.

Frank O’Shea is a member of the Tintean editorial collective.

One thought on “Breaking codes to beat Hitler”