Listowel, Co Kerry, was named Ireland’s tidiest town for the first time in 2018. There were 883 entries in categories from population less than 200 (won by Abbeyshrule Co Longford) to population more than 25 000 (won by Kilkenny).

Listowel TidyTowns chair Julie Gleeson paid particular tribute to what she called the ‘dawn crew’ – a group of volunteers who got up at 7am during the summer to pick up litter and water the flower baskets.

The annual competition is sponsored by SuperValu supermarket chain.

This year’s Man Booker Prize was awarded to Belf

ast-born, Sussex-resident writer Anna Burns. The 56-year old is the first Northern Ireland writer to win the award, following in the steps of southern writers Roddy Doyle, John Banville and Anne Enright. Her book Milkman was long odds for the prize and has been described as dense and controversial. The setting is Belfast during the Troubles, but the controversy is not how she deals with that but the almost experimental way she deals with her subject matter.

The prize for the winner is £50 000, but of even greater value is the surge in sale

s of the book which quickly went out of print in Britain.

The book has been described as ‘experimental.’ We will publish a review on these pages in the forthcoming months.

Sigerson Clifford put it as follows:

The tree-tied house of planter is colder than east wind,

The hall-door of the gombeen has no welcome for our kind.

The farmstead of the grabber is hungry as a stone,

But the little homes of Kerry will give us half their own. 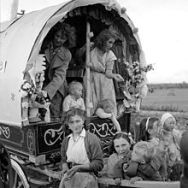 The speakers are the tinkers, about whom Clifford wrote lovingly, as did others like John Millington Synge and Brian McMahon. Today we call them Travellers, who in March 2017 were acknowledged by then Taoiseach Enda Kenny as a distinct ethnic group. Justice minister Charlie Flanagan does not agree, however. ‘I believe Travellers are Irish like the rest of us, no better, no worse,’ he was quoted as saying in the Irish Independent.

This arose after Peter Casey, one of the candidates for President of Ireland, had criticised the Travellers who had refused housing in Tipperary because there was not a place provided for their horses.

Mr Justice Charleton of the Supreme Court has delivered a scathing report on the treatment of Sergeant Maurice McCabe. McCabe was a whistleblower on corruption in the Gardai and was condemned by his superiors. One of the things they did was to refer him to Tusla, the child protection agency, a referral that went nowhere but was inadvertently made public by Tusla. The story is a long one and we eagerly await the book which will no doubt follow this report.

To give an idea of the way Charleton went about his work, here he is describing the garda press officer, Superintendent David Taylor:

At a minimum, the garda press officer should be someone who undertakes relevant training. Experience of working in the press office should be regarded as useful for the job of directing it. Even more than that, an honest person is required.

What Siobhan did next

The Irish Independent (Oct 26) announced that singer Siobhan O’Connor has converted to Islam. She has also changed her name to Shuhada Davitt, and has according to the Indo, ‘posted a recent photograph of herself wearing a hijab.’

In 1992, Siobhan made international headlines by ripping up a photograph of Pope John Paul on television. Seven years later, she was ordained a priest by a Tridentine bishop.

As expected, Michael D Higgins won the presidential election. With more than 55% of the votes, he was declared the winner after the first count. Second with about 23% was Peter Casey mentioned above, while the remaining candidates got between 2% and 6%. Voting is not compulsory in Ireland, and the number who actually voted was about 43.8%, which makes you wonder why the election was needed in the first place.

Three of the unsuccessful candidates were from Dragons’ Den, a television program where people pitch business ideas to a panel of financial experts. It is estimated that some of them have lost more than €200k, not much of an endorsement for their business acumen.