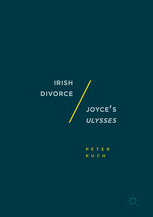 Its value in its scarcity, all the gold ever mined would fit comfortably in four Olympic swimming pools. Joyce’s canon, and in particular Ulysses, must like the earth have a limit to how far it can profitably be mined: there can only be so much gold in tham thar hills. We’re nowhere near that point yet, however, and Kuch’s book on Irish divorce in Ulysses is, as it were, a textbook example. It may constitute the last word on its subject, though one wouldn’t want to be bet on it: what’s remarkable is that it is more or less the first, at least the first to mine its subject thoroughly. Kuch has had to do his own spadework, and in a neglected area, for it had been assumed that divorce for the Blooms isn’t on the cards because they are Irish, all too Irish, and the Irish didn’t go in for that sort of thing. Well, they did, and Kuch demonstrates how it was possible for an Irish person to get a divorce, and subsequently remarry, by applying to the English court. This isn’t news, in the sense that it is a discovery, but it is certainly news, in that it has been all but forgotten. Further, this option gives the Blooms yet another potential future, one that very few readers will have noticed.

How has it come to this? The Blooms had a son, eleven years ago, who died at 11 days and they have never really recovered (how could you?). They haven’t had complete carnal intercourse for 10 years, 5 months and 18 days and worse, today, Thursday 16th June 1904, Molly is unfaithful to Poldy for the first time, and he sees it coming and does little to stop it. Things aren’t ticketyboo with the Blooms.

Kuch builds a robust case, along the way uncovering whole acres of newsprint and legal reports dedicated to Irish divorce through the English system. We may think of gossip sheets and mucky tabloids as a late 20th century invention, but a hundred years ago there was a whole afternoon’s entertainment to be had by reading the latest divorce scandal in the Daily Mail and the other rags. As Sir George H Lewis, a Judge in the Divorce Court, remarked to the 1912 Royal Commission on Divorce, ‘A great many people take up the paper and the first thing they do is to turn up and read about the Divorce Court… they are spicy reading.’ There is valuable social history here, that has lain forgotten and neglected, and Kuch makes great use of it, though occasionally one might wish he’d wielded the red pen more brutally, the faster to enable us to get the point.

It’s worth the driving to get to the arriving. A key scene for Kuch is late at night in the cabman’s shelter, when a tired and emotionally wrought Bloom makes the best of an effectively captive audience, a tired, uninterested, emotionally wrought and decidedly less than sober Stephen, to work through his thoughts on the subject. The subject at hand, of course, is the current state and future prospects, if any, of Bloom’s marriage to Molly. We never find out what happens next, on Friday 17th June 1904 and beyond, after Molly’s concluding if inconclusive ‘Yes,’ but it is apparent that their relationship is at or is headed towards something of a crossroads, a crisis. Kuch sees much in Bloom’s meanderings, and in particular a good working knowledge, driven by a desire to explore his options, of what would be involved in seeking divorce in the English courts. This is plausible, because all day Bloom has been simultaneously fending off intrusive thoughts of what’s going on at home and cooking up endearingly odd schemes to solve problems. And we know, because the book tells us, what his biggest problem is:

Which domestic problem as much as, if not more than, any other frequently engaged his mind?

What to do with our wives.

For Kuch, there is plentiful evidence that Bloom has not just idly wondered about the possibility of divorce (and at this time, using the English court was his only option), but that he has looked into it in some detail and is aware of the process and the potential pitfalls.

There is of course a desire for the ‘smoking gun,’ the incontrovertible evidence that this is Joyce at work, and that what Kuch is seeing is there, rather than paradoleia. Joyce studies may not yet approach the lunacy of the Shakespeare-Bacon conspiracy theories, but among the gold there’s certainly pyrite by the pile. Somewhere, no doubt, there’s a doctorate on the use of the word ‘the’ in Finnegans Wake.

Joyce’s method was always the oblique, the allusory, the suggestive, so it is hardly surprising that Kuch is having to sift for his gold. After all, if it was as ‘plain as a pikestaff’ then there would be no work for Kuch to do. He sees much, for example, in Joyce’s revision at the typescript stage of Bloom’s thought ‘Divorce not yet’ to ‘Divorce not now,’ though since this possibility when it appears is immediately preceded in Bloom’s mind by those of assassination and duel it’s hard to say with confidence that this is a real option while those are, presumably, not (though Joyce studies can always surprise us).

Even so, one might ask whether it’s vital that Kuch proves his case. As DH Lawrence observed the year after Ulysses was published (but not in reference to it), ‘Never trust the artist. Trust the tale. The proper function of the critic is to save the tale from the artist who created it.’ Does it matter, if Kuch’s research casts new light on Ulysses, and specifically on the complexities, ambiguities and open future of the Blooms’ marriage, whether it can be conclusively demonstrated that Joyce ‘meant it’? Is it not another demonstration of the scale of Joyce’s achievement that it can bear such a nuanced reading, which according to Kuch has lain unearthed for nigh on a century? What other treasures remain hidden?

Certainly we should be grateful to Kuch for his indefatigable research, which has unearthed valuable information on Ireland’s marriage practices, in doing so ever so subtly reshaping Ireland’s self-image. And we should be grateful to have our attention drawn to yet another dimension to the possible futures of Bloom and Molly. We all have our own evolving and shifting view of their relationship, and indeed of their own identities, motivations and fears, and perhaps we want the sense of an ending, happy or sad – some conclusion. Yet Joyce, as Keats said of Shakespeare, is ‘capable of being in uncertainties, mysteries, doubts, without any irritable reaching after fact and reason.’

Each of us has our own degree of appetite and taste for uncertainties, mysteries and doubts. Kuch has succeeded in opening Ulysses a little further, and, in giving us another option to consider in the fictional future of the Blooms, offered us another opportunity to read Joyce’s magnificent book once more anew.

Steve Carey wrote his D.Phil. on Joyce under the supervision of Richard Ellmann at Oxford, and is a key member of the Bloomsday in Melbourne committee.