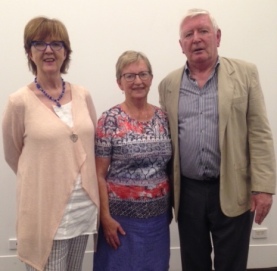 In introducing the 2017 winner of the Dr. Michael O’Sullivan Award (for the promotion of Irish Culture) at the Celtic Club Annual General Meeting on 11 November 2017, Deirdre Gillespie (President of the Irish Language Association)  congratulated Joan Moloney (her predecessor) as a quiet achiever in promoting the Irish Language in Melbourne over many years.

What follows is an edited account of Joan’s speech in reply:

Back in the early 90s, having arrived in Melbourne from Adelaide I was listening to the Irish programme on 3ZZZ and heard Mossie Scanlon speaking Irish in that lovely Kerry blas or accent. Not having spoken or indeed heard much Irish in the previous 10 years or so I was immediately ……….. and thought I had to get back to the language, but didn’t have the opportunity then. A couple of years later I was at the Irish festival in Koroit with my husband Tom and met Mossie and Chris Mooney for the first time – at a whiskey tasting in Burkes pub. They invited me to come along to the Irish classes and so started my long association with Cumann Gaeilge na hAstráile. At that time the Summer school was taking place in Victoria and I attended as a participant. A year or two later I was invited to be President and from then on I have so enjoyed helping to build and grow the Association through the weekly classes and school, teaching, speaking and sharing the language.

Another joy in being part of the Language Assoc and school is meeting people from all walks of life, drawn to the language for various reasons, as students, actors needing help with pronounciation, singers wanting to sing songs in Irish and those seeking translations.

The Celtic Club is to be applauded for facilitating the various Celtic cultures – Irish, Welsh and Scottish – all of whom hold language classes in the Club (or as is now happening in their admin rooms), and through the Cultural Heritage Committee, the Irish History Circle and music groups. At the end of each year the 3 language groups and sometimes Cornish representatives come together in the Club for a Christmas celebration singing carols in all the languages. A wonderful night.

As is stated in the citation for this award – language is the cornerstone of every society and so it is important to keep our Celtic languages alive, even far from our home countries.

Knowing the language of our country gives us a much better understanding of its people, history, literature, music and politics.

Nicholas Evans, a linguist, in his book  Dying Words: Endangered Languages And What They Have To Tell Us  states: ‘Learning a language is an act of respect towards a culture’.

Not to learn Irish is to miss the opportunity of understanding what life in this country has meant and could mean in a better future. It is to cut oneself off from ways of being at home. If we regard self-understanding, mutual understanding, imaginative enhancement, cultural diversity and a tolerant political atmosphere as desirable attainments, we should remember that a knowledge of the Irish language is an essential element in their realisation.

A rare event occurred in September this year.  In Prague, a major Irish language and literature conference took place over a number of days. The title of the conference was “ Ar an Imeall i lár an Domhain” ( On the Periphery in the Centre of the World) and its theme was liminality in Irish and European literature and culture. What was unique about this conference ? It was that 60 papers were presented , all in Irish by scholars based in Ireland, England, France, Finland, Poland, Italy, Nth America and the Czech Republic itself.

Wouldn’t it be wonderful if the Celtic Club could host such a gathering when it moves back to Queen St to its new premises?