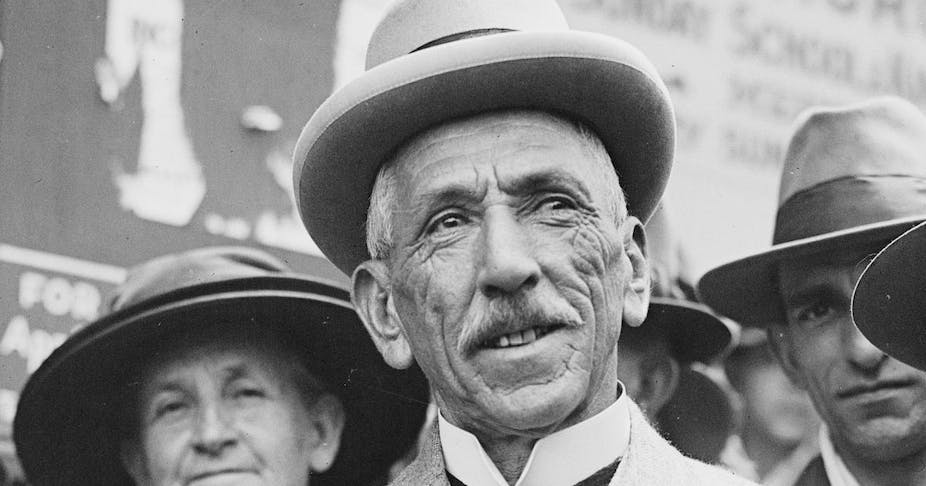 In an era of centenaries associated with the first world war, one that might slip under the radar is the Warwick egg incident.

The Warwick egg incident of November 29, 1917, occurred during the second conscription referendum campaign. Two Australians of Irish descent, Pat and Bart Brosnan, threw eggs at the prime minister, Billy Hughes, whose train had stopped at Warwick in Queensland’s Darling Downs. Hughes was there to speak in support of conscription at a meeting on the railway platform.

One egg hit the prime minister’s hat, starting a fight as Hughes’s supporters laid into the assailants, who were removed from the station. After order was restored, Hughes began his speech. But Pat had returned and started interjecting. Hughes jumped off the platform and into the crowd shouting: “Arrest that man!”

Pat was again removed. Later he would claim he threw the egg because he did not want to be conscripted.

Although many incidents of political violence occurred during the conscription campaigns – meetings were disrupted and speakers attacked – this event stands out for three reasons. First, it involved an assault on the prime minister of Australia. Second, it led to the establishment of the Commonwealth police force – later the Australian Federal Police. More significantly, it was symptomatic of the deep divisions in Australian society, exacerbated by the hard-fought political campaign over conscription: Irish Australians versus British Australians; Catholics versus Protestants; labour versus capital; empire loyalists versus Australia-first nationalists; the Queensland government versus the federal government.

It is difficult to comprehend the depth of those divisions today, particularly those along ethno-religious lines. Sectarianism, in the sense of the conflict between Protestants, then mostly of British descent, and Catholics, then almost exclusively of Irish descent, was a significant factor in social and political discourse in early 20th-century AustraliaWhen war broke out in August 1914, such differences were put aside, as Protestants and Catholics joined together in support of the war effort. But the uneasy truce was shattered during Easter week 1916, when Irish rebels seized the GPO in Dublin.

At first, Australian Catholics deplored the rising. But when the British military declared martial law and began executing the rebel leaders and interning thousands of Irish men and women, Catholics began to criticise the British government, provoking a Protestant backlash.

Class divisions also emerged over conscription, as living standards declined as a result of wartime austerity. The failure of Labor governments to meet workers’ expectations led to industrial disputes that rose to levels not seen before or since.

Tensions rose during 1917, with the belligerent, Irish-born Melbourne Archbishop Daniel Mannix criticising the war as an ‘ordinary trade war’. He engaged in a public slanging match with the prime minister, arguing that Australia had done enough, and that if Britain ended its occupation of Ireland it would not need Australian conscripts

To Hughes, the perceived influence of the Irish in Australia was alarming. In August 1917, he told the British prime minister, Lloyd George:

The Irish question is at the bottom of all our difficulties in Australia. They — the Irish — have captured the political machinery of the Labor organisations — assisted by syndicalists and I.W.W. [Industrial Workers of the World] people. The Church is secretly against recruiting. Its influence killed conscription.

(The Industrial Workers of the World was a revolutionary left-wing union-based organisation.)

Speaking of the general strike then taking place in NSW, Hughes added:

… [T]he I.W.W. and the Irish are mainly responsible for the trouble. In a sense it is political rather than industrial. … [T]hey are now trying to take the reins of Govt out of our hands.

It was against this background that Hughes found himself in Warwick, on his way back to Sydney, following the raid on the Queensland Government Printing Office. His worst fears were confirmed when a Queensland police officer, Senior Sergeant Henry Kenny, a Catholic of Irish descent, refused to arrest the egg throwers for breaching Commonwealth law, saying he answered to the Queensland government only.

This led Hughes to draft a regulation establishing the Commonwealth police force. In advising the governor-general on the regulation, Hughes wrote:

This will apply to Queensland where present position is one of latent rebellion. Police is honeycombed with Sinn Feiners and I.W.W … [T]here are towns in North Queensland where the Law … is openly ignored and I.W.W. and Sinn Féin run the show.

While in November 2017 we will rightly commemorate the centenary of the end of the Third Battle of Ypres (Passchendaele), in which the Australian Imperial Force suffered more than 38,000 casualties, the centenary of the Warwick egg incident is a timely reminder of the “war” on the home front. It was arguably the most divisive period in the nation’s history.

Celebrating the Centenary of the Warwick Egg Incident

Saturday, 18th November 2017 saw a long day of celebrations at Warwick, Queensland to commemorate the centenary of the Warwick Egg Incident (WEGGI), when a couple of local lads egged the Australian prime minister, Billy Hughes. While it might be a little known incident today, 100 years ago it excited the nation. (See article above!)

To mark the centenary, the citizens of Warwick last weekend celebrated in fine form their town’s ’13 minutes of fame, undeterred by a constant drizzle of rain. Many worked hard to make the day a success, but none more so than Julie Conway (a Brosnan), whose energy and enthusiasm brought it all together.

The day started in the morning with a public history event at which I, along with Rod and Robin Sullivan of the University of Queensland, addressed a receptive audience of more than 200 at St Mary’s Hall on the historical significance of the WEGGI. (My paper can be read here: Kildea-Warwick-Egg-Incident. A shorter piece published in The Conversation can be read here.) The event included a panel discussion and a round of songs by the Combined Unions Choir.

The next event was a re-enactment of the egg-throwing at the Warwick railway station, which included more songs by the Combined Unions Choir and a poetry recital. Those present to see the re-enactment far exceeded the 300 or so who witnessed the original event. (A YouTube clip of the re-enactment is here.

Next it was the turn of the Australian Federal Police, who unveiled a plaque commemorating 100 years of Commonwealth policing. Fittingly, the plaque is located opposite the railway station in the newly established Billy Hughes Park, which is ringed – I kid you not – by Brosnan Crescent. Thereafter, across the road in O’Mahoney’s Hotel, a reunion of Brosnans got under way, some having travelled from as far afield as Perth. And that night, the long day’s activities came to an end with a dinner at the railway station hosted by Southern Downs Steam Railway.

All in all it was a wonderful community event that reminded us that while Australia’s soldiers 100 years ago were fighting on the Western Front and in Palestine, there was also conflict on the home front that saw the Australian people divided along ethno-religious and class lines. The good humour and conviviality of the day’s activities is testimony to the fact that for the most part those divisions no longer exist. Nevertheless, it is also a reminder that even in amiable Australia inter-communal harmony is fragile and vulnerable to shabby political exploitation.

Dr Jeff Kildea is a historian, an academic and author and is a regular contributor to Tinteán