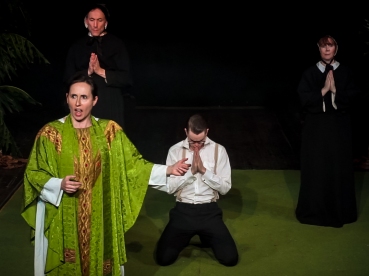 Bloomsday in Melbourne presented Portrait of the Artist as a Young Man at fortyfive downstairs, Flinders Lane Melbourne from 15–19 June. Waiting to enter the theatre  involved standing on the wooden stairs in a slightly restive queue of Joyce enthusiasts, many of whom (as I overheard) had spat in the Liffey. It’s often been said that every era produces its own Hamlet because the struggle to individuate, to decide how to be in the world is renewed in every generation. James Joyce granted us another perennial youth, struggling through hells of other people’s making or imagining, to either claim his personal sovereignty as a man and artist or lose it forever in Portrait of the Artist as a Young Man. 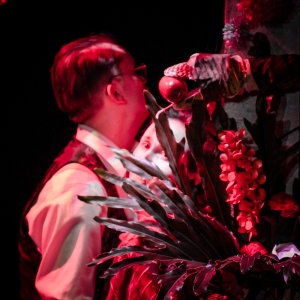 Stephen is tempted in Nightgown. Photo by Bernard Peasley

Joyce’s Portrait, unlike Hamlet, has inherent staging problems – it’s mostly the inner voice of Stephen Dedalus as his mind grows in complexity and continually recasts itself in response to what is around him. The production took a sensual, carnival-like approach, with music and costumes pulled from many different eras, the actors quickly swapping roles and scenes as Stephen observes and reacts. It was performed in the round with the simplest of props for scenes like the family dinner party, a cloth quickly spread on the floor which turned it into a kind of picnic. Uncle Charles Casey’s (Steven Dawson) ‘Parnell, my dead king!’ was delivered with real pathos; the sob in his voice belied his ‘drunk uncle’ personality, which (like Parnell), was eventually defeated by Dante’s narrow and implacable Catholic faith. 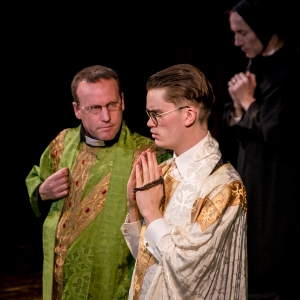 Matthew Dorning (who strongly resembles a young James Joyce) was Stephen Dedalus, and had an engaging and charismatic presence. The ensemble of seven actors provided characters, a chorus, narrators and set scenes for Dorning to enact crucial moments of Joyce’s narrative. Christina Costigan deserves a special mention for her powerhouse yet nuanced performances of Stephen’s mother, a prostitute, and in particular the Sermoniser, who shrivels Stephen’s emerging self and sexuality with his description of the eternal torments of Hell. The chanting of the Litany of Our Lady (‘Mystical Rose, Tower of Gold …’) was a reminder of the often sublime lyricism of the liturgy of the Catholic Church and how it informed Joyce’s language.

Lucille runs a radio programme on Literature on Inner FM, a radio station that transmits from Heidelberg, Melbourne.

One thought on “Staking Sovereignty as an Artist”