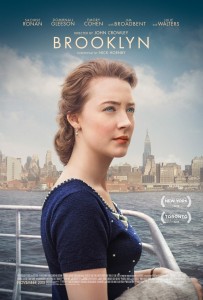 When I reviewed Colm Tóibín’s novel for Tintean in 2010, I was frankly underwhelmed, though I’m usually a huge fan of this great Irish novelist. Whether or not I would feel the same a few years later remains moot, and I will no doubt re-visit and test my earlier judgment. But seeing Crowley’s film is a rare case where an adaptation of a book to film exceeds my expectations. Usually one makes excuses that you can’t replicate a 30 hour read in 90 minutes in the cinema.  But in this case, I felt the opposite, that the film had brought out possibilities in the novel that I’d not considered, and I’m grateful for that, and that it had truly served its source lovingly.

Brooklyn is a gentle film which takes you on an anguishing journey in the spirit of everyday-ness. Eilis could be any migrant anywhere, facing quotidian dilemmas. Except that she loves the Irish life and culture she left, and learns to love the one she takes on, and has to make very tough choices. John Crowley does not load the dice: Brooklyn has its own luscious attractions, red brick and all as they may be; and equipped with skills and confidence, Wexford is transformed into the romantic idyll, with long seascapes (very Tóibín) complete with marriageable moneyed men who previously were beyond her circle. The visual textures of this film are sumptuous, especially the clothing, hairstyles, streetscapes, all meticulous recreations of the ’50s, which endured longer in Ireland. That may make it a ‘chick flick’, but I’ve overheard grown men in melt-down in response to this film, so I’m guessing its appeal is broader. I’d go so far as to say it’s in the not-to-be-missed category, but expect nothing other than subtlety, quietness and delicious time-taking. For anyone who knows the migrant experience, it will be essential viewing of a sort that I thought had been left behind in movie theatres. The film does the emotional tug of war exquisitely.

The character played by Saoirse Ronan, Eilis, is not quite as passive as I imagined her from the book. She is

delicate and underconfident, but those attributes are easily explained by her youth and lack of access to real work. She’s a bright girl and, even as a teenager, knows how to give stick if pressed too hard, and she’d rather be shipped out than bullied by the town’s harridan. The lack of agency is there, because the prime movers to export her to the US are in fact forces that are hard to resist. A loving sister gently nudges her out of the Irish rural orbit in search of work that befits her intelligence, while a pastoral-care-minded priest, nurtures her rather more gently and sensitively than I’d apprehended from the novel. It is, I believe, a benign make-over of the novel, and does Tóibín’s signature understatement even more insistently than he does. Much relies on cinematographer Yves Bélanger’s still focus on Eilis’ face and Saoirse Ronan’s micro-expressions to augment and carry the subtlety of characterisation.

What the film does brilliantly is to evoke the differences between the worlds in terms of opportunities and stimulation, without making judgments.  Brooklyn, filmed on location in Montreal (standing in for Brooklyn), makes the most of the red brick streetscapes of Brooklyn, and the glittering commercial interiors of the shops as well as the crowded strand at Coney Island. It is gritty enough and one is under no illusion about the difficulties the under-prepared young girl experiences, and the risks ever-hovering, of coping with low wages, a heavily monitored Catholic social circle (presided over by the landlady Mrs Keogh – played vivace by Julie Walters) and dominated by the priest, Fr Flood (Jim Broadbent), who has no compunction in taking over her life and career. But the young feisty woman soon outgrows all of the constraints she is up against, including her manipulative mother. The hard satiric edges have been rubbed off Tóibín ‘s  characters, and the ones that emerge from Nick Hornby’s incisive screenplay, are just as engaging, and much more benign. Warm glow territory.  As with the softening of the characters of the priest and the landlady, the bevy of (mainly) beauties who act like overgrown sophomores in the boarding-house (which bothered me a lot in the novel) are more delicately vulnerable, and gloriously sensuous watching as they cavort in vintage gear and with mannerisms to match. One can certainly feel for them in their desperate and often misguided search for partners.

The return to Ireland in the film’s third movement is visually seductive. Yves Bélanger, a Quebecois (previously known for Dallas Buyers Club and Wild), deeply understands how to build and augment and fill his screen with symbolically charged images. The long seascape of Wexford is made to carry the weight of Eilis’s longing to be an Irish girl in Ireland. The repeated motif of leaving the darkened immigration hall on Staten Island, and walking into the light is another example of making one’s everyday and simple images do heavy-duty symbolism. Similarly, the very subtle use of costume is another way of charting Eilis’s upward mobility and it pays off when swimming costumes are revealed first in Coney Island and then in Wexford. The costumes are also subtly right for the declassé immigrant girls, not too posh, but classy by Irish standards.

The musical score is unobtrusive but always pointing up emotions, and and interestingly it ranges widely from contemporary Hollywood music and John McCormack’s popular sentimental Irishry to traditional sean-nós. The selection of melodies, importantly, avoids the clichés of Irish music.  The song sung in Irish by a down-n-outer at the charity Xmas dinner is set to break anyone’s heart and prompt agonized longings for what has been left behind.

This is a superb film, for those who like their film gentle, thought-provoking (but not edgy), and it deserves its swag of awards, and those undoubtedly to come. I was not aware of any false notes. Even its sentimentality was finely judged.

Frances is a member of the editorial collective of Tinteán.