A Book Review by Frank O’Shea

Tony O’Reilly had everything: a sporting superstar before that term was invented, an international businessman, a high flying entrepreneur. But that is past tense because today he is officially broke, living the life of a recluse, supported by his wife, in uneasy contact with his six children. Even more alarming for a person so proud of his Irishness, the country seems to have turned its back on him.

O’Reilly is now 80 years old. His success stories are well known: Kerrygold, Heinz, Weight Watchers, Australian Provincial Newspapers, many others. While heading up Heinz in Pittsburgh, he returned to Ireland most weekends to work on his Irish enterprises like Atlantic Resources, Fitzwilton, Independent News & Media (IN) and Waterford Wedgewood. 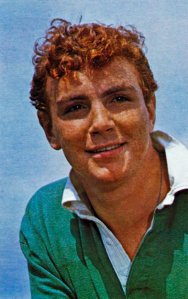 Tony O’Reilly in his rugby days

This reviewer recalls a time in the 1970s when, if you didn’t have shares in one or more of his companies, you were a drongo. As it turned out, you were also wise.

But before all that, there was O’Reilly the rugby player. He first represented Ireland as an 18-year old but his best games were with the British and Irish Lions on the 1955 tours to South Africa and four years later to Australia/New Zealand.

He was recalled to the Irish team in 1970, to the amusement of the rugby world – “a guest appearance” was how Tom Kiernan acerbically described it – taking a place that would otherwise have gone to Frank O’Driscoll, father of BOD.

The author of this book is a former editor of The Sunday Tribune, a newspaper in O’Reilly’s IN stable, but one which consistently lost money. That didn’t worry its owner who liked that paper’s sassy earnestness.

He also owned the loss-making London Independent, the only major UK media outlet that opposed the disastrous Iraq war. The important thing for O’Reilly was that an Irishman owned Britain’s most prestigious masthead, a position made more significant after Murdoch took the Times downmarket and sold it on the streets for a penny. Interestingly, O’Reilly himself was a supporter of the war but did not interfere with or try to influence the opinions of his editors or writers like Robert Fisk. He had the same hands-off management style with the Irish Independent.

If the calibre of a person may be in some small way judged by the enemies he makes, O’Reilly would come out well. Among his most strident critics and business adversaries were people like Dermot Desmond and Denis O’Brien. These were the main movers in his ejection from IN, leaving him to deal with the huge debts he had run up in that and his other companies.

His dinners and entertainments at his mansion in Kildare were legendary, though the food was reputedly quite ordinary. Politicians, sports heroes, business leaders from all over the world would come, though again you could judge by who was not invited – Charlie Haughey, for example, was never on the list, nor Ray Burke.

Much of the book is devoted to O’Reilly’s attempts to keep the bankers and bondholders and fund managers from his silverware, an effort in which he was ultimately unsuccessful. 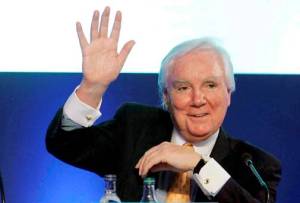 But by far the most interesting story is his personal life. His parents did not marry until a few years before their death, his father having left his own wife and four children to fend for themselves.

This is Edna O’Brien territory, one family abandoned while an ‘illegitimate’ son was given every chance in life. Indeed, it is the kind of story that Shakespeare might have written and one that never resolved itself; what’s more, there were echoes of his upbringing in O’Reilly’s less than perfect behaviour towards his first wife, the Australian Susan Cameron, mother of his children.

Cooper has presented a clear and unbiased account of his subject, in no way eliding his faults in business and in his personal life, but at the same time avoiding anything that might be regarded as a hatchet job.

Tony O’Reilly was the tallest of Irish tall poppies, an easy target for the begrudgers, but the author makes a strong case for Tony O’Reilly, the modern Irish patriot.

Frank is a retired mathematics teacher who has recently moved from Canberra to Melbourne. He is a regular contributor to The Age and other Fairfax mastheads and the Irish Echo.