The Holly Bough is one of those unique publications that deserves a heritage rating: indeed, it may already have one. Seventy years ago in Cork and Kerry, it was as much part of Christmas as Santa and the candles perilously lit in curtained windows. Stories, poems, puzzles, games, it kept us busy for days. We learn now that it is 122 years old and still published. The edition for the Christmas just past ran to more than 160 pages. On page 4, we found this story, reprinted here with permission from editor John Dolan. Thanks, John.

Chance meeting that led to a 53-year friendship

Corkonians are a welcoming breed — as Australian woman Barbara Lewis found out when she spent just 18 hours here in 1966. She tells SINEAD McCARTHY how she struck up a bond with a family that has lasted a lifetime

WHEN Barbara Lewis made her one and only, whistle-stop visit to Cork 53 years ago, she could never have known that she would strike up a friendship that would last a lifetime.The Australian spent just 18 hours here — but it was enough time to get to know a family so well, that even now, more than half a century later, she is still being sent the Holly Bough every Christmas.

The story begins one evening in early April, 1966. Barbara, who was 25 at the time, had come to Europe two years earlier, to represent Australia in the World Parachuting Championships in Germany. She then worked in London for two years and was about to fly to Washington D.C, where a job awaited her. But first, she decided to fit in a three-day trip to Ireland — land of her ancestors — over the Easter bank holiday.

She explains: “I wanted to see the country of my mother’s grandparents, George Dobson, born in Leitrim, and Sarah Jane King, daughter of John King, who was born in Armagh. They met and married in Newcastle, New South Wales, Australia, in 1884.”

But fate was to intervene.

I missed a train leaving Dublin for Galway Bay by ten minutes — Galway Bay was a song we sang around my grandmother’s piano in the 1950s. The next train was bound for Cork…

With the spirit of adventure in her soul, Barbara got on board and arrived in this city a stranger. Her train pulled in at a prestigious time for the railway station — that very weekend it had been renamed from Glanmire Road Station to Kent Station, in honour of Thomas Kent, to mark the 50th anniversary of the Easter Rising. 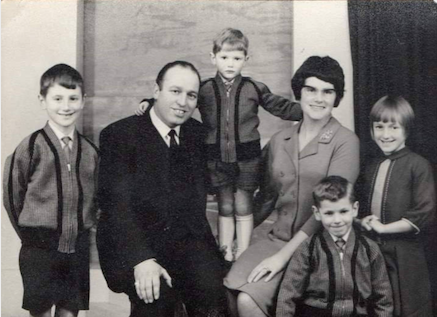 Don and Mary Bloss with their children in 1966, from left, Fintan, Don Jnr, Tony and Bernadette

Now Barbara needed a place to stay. ‘I asked at a newsagent if they might know of a bed and breakfast place and I was directed to the house of Don and Mary Bloss. Little did I know what it would all lead to.’

Don and Mary’s family home at 15, North Mall also doubled up as a B&B. When Barbara arrived, she soon found that she and London-born Don, who had joined the Merchant Navy as a chef at 16, had lots in common.

Don had been a chef on the Orient Line and had sailed into Sydney quite a number of times. You can imagine our conversation during the evening as we each recalled Sydney’s attractions.

Barbara’s home in Newcastle is 110 miles north of Sydney, and she had often visited the city to see relatives. Mary, who had been to the U.S, also gave Barbara tips on life there ahead of her journey to Washington.

Barbara adds: ‘It is wonderful now to look back at that day when I arrived just in time for an evening meal. Our conversations went on for hours.’ She and the family formed a quick and close bond and Barbara said: ‘The next morning, Mary took me shopping and sightseeing, showing me as much of the area as possible in so short a time.’

The person allocated to escort her back to the station was Mary and Don’s son, nine-year-old Fintan. Barbara said: ‘I left at 11.30am for my return to Dublin and the subsequent steamer back to Wales that night.’

She and the Bloss family kept in touch — Mary sent Christmas cards and, after her death in 2004, Fintan, of Sundays Well, began sending the Holly Bough to the lady he had escorted to the station as a nine-year-old. 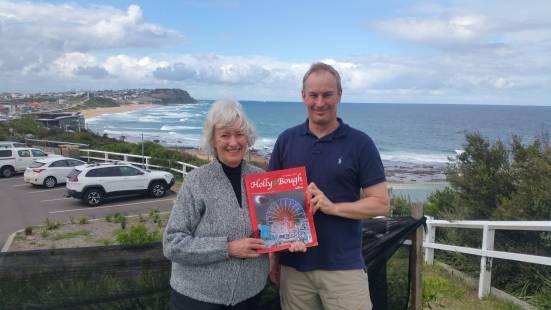 Last year, Barbara appeared in our Picture Gallery section, with her son, David Thornton, on Mereweather Beach in Newcastle.

In 1994, David visited the Bloss family when he was in Ireland. His mother has never come back, although she has kept up the links to Cork, even writing to radio stations here to request songs to mark special events for the Bloss family. Barbara added: ‘I loved seeing John Creedon on the 2016 Holly Bough cover. He brought lots of happiness to the Bloss family when I sent him requests.’

Don — who became one of the city’s first traffic wardens and was active in Civil Defence, as well as being a supervisor at Paul Street car park — passed away in January this year. He and Mary had four children, Fintan, Bernadette, Tony and Don Jnr, 12 grandchildren and seven great-grandchildren. The children are keen to retain the links forged by their parents 53 years ago, when they met a young Australian woman alone in the big city and opened their home and their hearts to her.