A Report on a Seminar at The Oratory, Newman College 8 November 2018 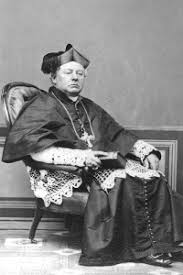 This symposium, a joint venture by Newman College, the Gerry Higgins Chair of Irish Study at Melbourne University and the Melbourne Irish Studies Seminars, reported progress on an ARC Discovery Project researching aspects of the life of James Alipius Goold, Bishop of Melbourne from 1848 until 1873, and Archbishop from 1874 until his death in 1886.

Subject-wise the papers presented could hardly have been more diverse in subject and scope. Firstly Paola Colleoni from the University of Melbourne drew on the drawings and plans for Saint Patrick’s cathedral of architect William Wardell, newspaper reports, and correspondence between Goold and Wardell over their thirty year partnership in its construction. What came across for me is how the final from and character of the cathedral, one of Melbourne’s icons, evolved progressively over that time. Huw Sandaver from the Mannix Library then drew on a range of library and other sources to explore the extent and production qualities of Goold’s library which included many French books and such gems as A Catechism of the History of Ireland. Along the way, Huw presented evidence from nineteenth-century Irish sources that the linking of bookshops with coffee outlets is not a new phenomenon. Finally  Jayne Anderson from the University explored a vast range of material to show how Goold, travelling in Italy between 1832 and 1837, prior to his ordination as a priest, became familiar with major European art works, eventually organising as Bishop in 1852 to import 135 Old Masters’ paintings to Australia, one of which, Romanelli’s painting of the Virgin and St John the Baptist, Goold gifted to the Sisters of  Mercy for the opening of their Kilmore chapel.

I learned a lot about Goold and the cultural life of 19thcentury Melbourne from this seminar.