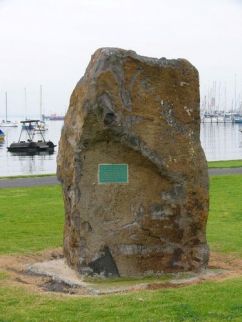 The waters of Hobsons Bay have always been busy with the movement of shipping traffic into Melbourne. Some 171 years ago, that steady flow of ships travelling to the then fledgling city included the Lady Kennaway, Pemberton, Diadem, New Liverpool, Derwent and Eliza Caroline.

It was the height of the Great Irish Famine (1845-1852), and the ships carried 1700 Irish Famine Orphan Girls, aged between 14-20 years, from workhouses (poorhouses) across Ireland. They were part of the Earl Grey scheme which saw a total of 4000 Irish orphan girls brought to Australia over 1849-1851 to work as servants and help settle the new colony.

They had been among the destitute; orphans consigned to the despair of workhouses, feared places of last resort for the most desperate. Much of workhouse design was intended to deter people seeking shelter from the ravages of the Famine. According to information from the Derry Workhouse, it was indicative of such institutions.

Upon admittance, families were separated; with fathers, mothers and children (over the age of two years) assigned to separate dormitories. Mothers had limited visitation with their children, but many fathers never saw their children again.

Diseases such typhus, fever and dysentery were rife in the poor conditions and most who died were buried in mass burial grounds onsite.

Basic food provisions consisted of bread, porridge, soup and potatoes, with occasional serves of meat and bacon. Rationing was strict and set at 3884-5060 grams of solid food per week, approximately half the level of rations given to prisoners in jail.

Work dominated the grind of daily life, comprising largely menial tasks. It was heavily structured and unpaid, and failure to complete tasks met with harsh punishment. This was intended to instil a discipline of work, add to institutional self-sufficiency, and solidify the forbidding nature of the workhouse option, even for the destitute. Only the very old or people physically incapable were exempt from work tasks, which included braiding fibre to make rope, sewing, cleaning, laundry or nursing for the women and children, while the men broke rocks for road building. Basic education was provided for children, who comprised half the number of inmates.

After the brutal conditions of the workhouses, life on board ship was significantly better. According to 1848 records of the Lady Kennaway, the complement of 191 Irish orphan girls were well behaved and in excellent health, having enjoyed the benefit of a full allowance of rations on the 85 day voyage. Although few could read and almost none could write, they were given a prayer book and testament from their respective poorhouses.

Nearing their destination, expectations would be high for their new life in the New World. But their joy was initially short-lived, as they were met by a climate of fear and suspicion towards the influx of Irish refugees. The girls were widely criticised in the press and often subjected to abuse in the streets, withreports of exploitation and even abuse by unprincipled employers. Stereotypes perpetuated ridicule of their appearance, aptitude, abilities and moral fibre.

But the orphan girls were made of stern stuff, and most successfully married and raised healthy families across Australia. Today, many thousands of their descendants are living testament to the courage and strength of the Irish Famine orphan girls.

In the decade around An Gorta Mór (The Great Hunger), between the years 1841-1851, the Irish population had declined by three million. As a plausible estimate, many reliable historians state that one million people died and two million people emigrated; most fleeing to England, the USA and Canada, with approximately 40,000 to Australia and a significant increase in convict numbers sent to Tasmania.

In tribute, the orphan girls’ story is commemorated in the cities they first called home in the New Land. The Melbourne ceremony is held at Famine Rock, a standing stone monument erected in 1998, and funded largely by public donation.

During his 2017 visit to Australia the President of Ireland, Michael D Higgins, made headlines when speaking to Irish responsibilities for the dispossession of Aboriginal Australians. Irish Famine Commemoration Committee Chair, Dr Val Noone OA, agreed with President Higgins, commenting:

It is a pity he did not pay a visit to the Famine Rock, where he would have seen that the Melbourne Irish community took a stand on this point twenty years ago.

Guest speaker at this year’s event is Patrick O’Donovan TD, Minister of State representing the Government of Ireland. Featured musicians are Vince Brophy and Cora Browne, with Uilleann piper Leo Kelly. A vignette of readings entitled Voices will give voice to the Irish Famine Orphan Girls experience. Poignant moments further include the laying of flowers, and the naming of orphan girls by their descendants. A Roundtable: The Famine and Irish Australia follows at Williamstown Town Hall, further marking the international event.

The commemoration in Melbourne will consist of two events: 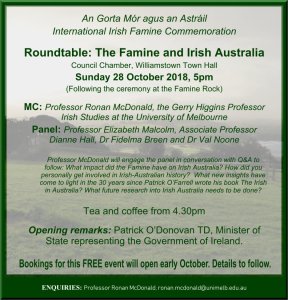 Roundtable: The Famine and Irish Australia

Both events are FREE but bookings are essential for the evening Roundtable event. Book here.