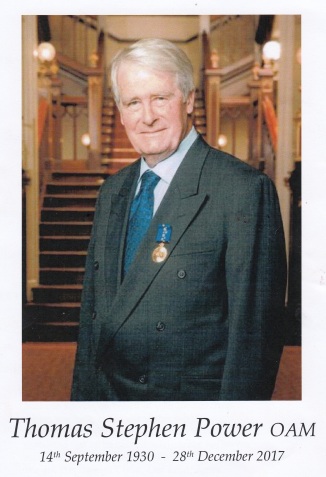 A Tribute on the occasion of his funeral by Perry McIntyre

Firstly, my heartfelt sympathy to Tom’s extended family and friends. Particular thanks to his wife, Trish, for asking me to say something today about one of Tom’s great passions and achievements – the building of the Memorial to the Great Irish Famine at the Hyde Park Barracks in Sydney. Having successfully erected the Memorial, Tom then put huge energy into the on-going remembering of that great historical watershed in Irish history by organising an event each year on the anniversary of the unveiling of the Memorial on the last Sunday in August.

Tom had not long retired from Corrective Services where his compassion for people shone as he was a major influence in the development by that Department of proper educational services for prisoners to help them get jobs post-release. In February 1995, soon after Tom’s retirement the then President of Ireland, Mary Robinson gave a ground-breaking speech to both the Irish Parliament and the Senate to commemorate the 150th anniversary of the start of the Irish Famine. She redefined the term, ‘Irish emigrants’ as the ‘Irish diaspora’, opening up the possibility of re-imaging what it means to be Irish and/or of Irish descent.

In her address Robinson sought to dispel the idea of emigration as ‘just a chronicle of sorrow and regret’ and to think of it as ‘also a powerful story of contribution and adaptation’. Her source for so thinking lay with her wide experience, as President, allowing her to meet an array of people living outside Ireland who had been born in Ireland. She passionately suggested the people of Ireland should turn to these emigrants with open minds and hearts. She was acutely aware of how broad the ‘term the people of Ireland was and how it resisted any fixed or narrow definition’. Tom Power was motivated and soon moved to action, getting Irish-born members of the Australian community such as himself as well as Australian-born people with an interest in Irish history involved in a famine commemorative project.

Despite an excellent education at school in Ireland, Tom admitted he had been taught very little, if anything about the famine. However, he was determined to take up Mary Robinson’s challenge and in Australia as the chair of the Tipperary Association, at a joint meeting of the Irish County Associations in November 1995, he was elected Chairman of the Great Irish Famine Commemoration Committee. Fundraising began with the co-operation of many people, organisations and the huge support of the then Irish Ambassador to Australia, Richard O’Brien. Tom was great at getting people to do things for him as I’m sure his family, friends and people here today will attest! With gigantic enthusiasm and energy he cajoled, enticed, sweet-talked, lured, invited and even gently bribed people and organisations to donate and support the building of the Irish Famine Memorial.

People and organisations, regardless of their politics, religion or nativity were all in his sights – no one escaped – politicians, historians, artists, senior public servants, friends, his doctor, his neighbours – all were on his radar. Some who were finely fixed in his gaze were Bob Carr, Paul Keating, Frank Sartor, Bishop David Cremin, Tom Kineally, Aedeen Cremin, Johnno Johnson, Al Grassby and Jack Mundey, the Chair of Historic Houses Trust. Tom went right to the top of the Irish Government and the Australian Federal and State Governments – no one was immune. The Archives of the Famine Committee abound with letters written by Tom or by members of his committee, such as Secretary Terrie Pollard and Treasurer Marie Tunks. For example Tom wrote letters to every local county authority and historical society in Ireland asking for a donation and their support; letters also went to historical societies and Irish associations and businesses throughout Australia. The postage alone much have almost placed the Power family themselves into a famine situation! 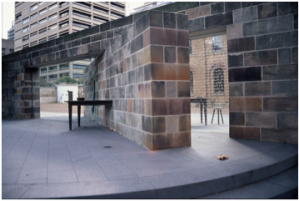 the budgets had risen to $200,000 – somewhat of a jump from the initial idea of a $30,000 statue! The final figure was in the region of $350,000. The Famine Memorial was unveiled by Sir William Dean, Governor-General of Australia, on 28 August 1999 in the presence of an estimated 2500 people including 800 descendants of famine workhouse orphans who became the faces of famine emigration to Australia. I well remember the unveiling day and the Mass celebrated at the nearby St Mary’s Cathedral where there was standing room only.

I have to remind you here today this memorial is a Famine memorial not a memorial to the workhouse orphan girls – they were the personification of Irish Famine emigration but over 44,000 Irish people immigrated just to NSW between 1848 and 1870, most famine survivors.

While the memory of the Famine in Ireland may have long lingered in the psyche of the Irish people, its impact and the resultant emigrant population was rarely examined publically until the sesquicentenary approached in the 1990s. Tom’s response to Mary Robinson’s plea to remember and his vision is now embodied in the most understated and moving Famine memorial in the world and I’ve see a great number of them! It is a commemorative reminder of the Famine as a watershed in Irish history but it is also a visible reminder of all people who, like those refugees from mid-nineteenth Ireland, are forced to leave their homeland.

However, it is not only a memorial to the dead but a reminder of those who survived. As an ongoing part of Tom Power’s vision to remember, today the Great Irish Famine Commemoration Committee (GIFCC) runs three outreach programmes to help modern-day refugees in Australia including Tom’s favourite programme – the refugee programme run by Catholic Care Social Services at Mamre House, St Marys to which over $50,000 has now been donated.

Tom Power will always be remembered when people visit the Australian Famine Memorial and it stands as testimony of this caring and passionate man whose education was broad with his global understanding of history and humanity and what it takes to be proactively compassionate.  He didn’t just talk about what he wanted – he went out and grasped it with both hands. This quality could be very frustrating as he was inclined to ‘do his own thing’, despite what committees may have decided. I remember his bewildered face when confronted after trotting off to ‘discuss’ things with people after meetings. He was just doing what was necessary, surely!? He was not a man to fiddle while Rome burned.

John O’Brien (Patrick Joseph Hartigan), Australian-born of County Clare emigrants was a priest and bush poet. I want to read you a few verses from his poem ‘The Helping Hand’ [from Around the Boree Log and other verses] which says more than I can ever do–this was not one of his better known poems but is very appropriate to say good bye to Tom Power and I think he’d like his Aussie friend to read an Australian poem rather than one from Ireland, as Tom, was had become an Australia citizen as well as always remaining a fiercely proud Irishman.

When that hour comes when I shall sit alone,
And ponder on the things there were, but are no more,
The while the weird night-breeze’s dirge-like monotone
Is sobbing fitful anthems around the door;

When I have lived my life, and Time at last
Displays the mottled fate the sisters three have spun,
When the night’s mystic, sombre, starless cloak is cast
Around the naked shoulders of the sun;

To fellow-pilgrims toiling at my side,
Who, work and weary, faint and fall beside the road,
If here betimes the blinding, scalding tear I’ve dried,
Or soothed a heart, or eased a galling load,

For He shall say “Your name in dust is hid,
No thought or word has earned you immorality;
Immortal only were the kindly things you did—
Amen I say, you did them unto me.”

One thought on “Eulogy for Tom Power”