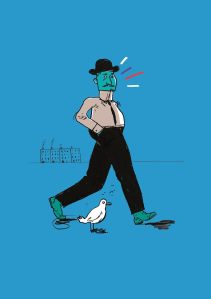 Primed by an earlier interview between Peter Sheridan and Dermott Bolger at the James Joyce Centre about his adaptation of Ulysses, and having seen and relished the Glasgow Tron Theatre production in 2013, I knew to expect a performance focussed on the bed, the centre of Bloom’s affective life. I knew it played up the family romance and Molly and Bloom’s long period of grief for their baby son, Rudi, dead at 11 days. These clean lines had been further strengthened and clarified in this production. Bolger was keen to let those at the interview know that this was not a ‘dutiful’ adaptation, and his play is stronger for that.

The reduction of set trappings accounted for much of what had been streamlined between productions. The Tron production had (under-) used a  busy two story set which looked as if it might have migrated from a Dickens show. Super clever, intriguing,  but distracting. This set by contrast was just the bed, a bar, and it was staged in the round, a first for the Abbey Theatre, and I hope not a last.  Some patrons sat on cabaret-style tables on the stage. This very much helped the illusion that they were part of the teeming mass of characters who are Dublin in the novel. By great good luck, they had an appetite for laughing, that proved quite infectious. It was a master stroke by Graham McLaren, though it means that the production will change nightly even more than in most plays.

A further technical device which increased the sense that there were loads more actors performing was the use of puppets, with sometimes more than one being operated by an actor. These, when they turned up as phantasms in the Nighttown episode, wore a half size version of the costumes of the daytime persona. Another inspired creative decision. The first puppet to be introduced was Rudi during the Hades episode, but as the play became less naturalistic, they proliferated. And indeed it was comic use of the puppet of the dog, Garryowen, which made the Cyclops episode less distasteful. Bloom as benign and inoffensive, and given to moralising (in ways I think Joyce largely avoids) again appropriately pulled the focus away from the ugly antisemitism, and lighting effects made much of his apotheosis without need for throwing the biscuit-tin, which was available for throwing, but didn’t need to be.

Adapting Joyce means often changing the mood speedily and perhaps fractionally before an audience is willing to go there, so how transitions are handled can be tricky. With the open plan stage and a very smart lighting plot and an electronic piano, changes were almost seamless. The changes were fast and spit-spot, and action frequently orbited the bed, Bloom especially. This decision to have Bloom drawn to the bed reminded me of the moment in Ch 17 when Molly lights her lamp in the room above while Bloom and Stephen are contemplating the ‘heaventree of stars hung with humid nightblue fruit’ and their place in the cosmos, while engaging in a very mundane act. Her light momentarily and wordlessly becomes the moon that draws them. Bolger, far from being intimidated by Joyce, seems to have got under the skin of this humane novel in disarming ways.

Bloom and Molly put in sterling performances: one could easily grasp her sensual pull on him, and his gentle refusal to compete with Blazes was part of why she both reviles and admires him. Janet Moran’s performance exuded the confidence of a woman secure in her bodily attractiveness and willing to surrender to her drives, while David Pearse’s Bloom was steady, sane, thoughtful, loveable, and the more so when we get the chance to see his id and superego untethered in the brothel scene. Blazes played by Garrett Lombard was a parody Lothario, and it was fun to see him using his knobbed cane to play to an empty bed in Bloom’s fantasy of his cuckolding.

Did I have reservations about aspects of the play? Some. For a production which played up the family romance, I was disappointed that too little was made of a key scene at the end of Circe, in which Stephen and Rudi become avatars of one another, the missing and desired son coalesce in a composite which consoles and holds out a promise to the grieving father. The moment was lost as the two characters needed to be on stage and signalled by a lighting state that underscored the significance of Bloom’s hope, but they were remote from one another and at different ends of the stage and theatre. This was, I think, a regrettable mis-step in blocking the scene by the director. And, while I applaud the clever intercutting between the men in the church with Gerty’s  antics on Sandymount Strand (superb comedy), I’m not sure prudery didn’t obscure the libidinous nature of Gerty’s crossed legs and rhythmic rocking display.

I did what I usually did in leaving the theatre and eavesdropped on the audience. It was intriguing to hear that although they weren’t necessarily familiar with the novel and occasionally got lost in the production, that they were genuinely enthused by it and owning it. Bolger’s objective was to reach those who had not read it, and he clearly did. All praise to the Abbey for staging this adaptation. It’s been a long time coming for Abbey audiences. It was hard to resist the raw energy of this show with its illusion of a cast of thousands.

Frances has reviewed plays since the early 1980s and has run Bloomsday in Melbourne since 1994.

2 thoughts on “Centre Stage, The Bed”