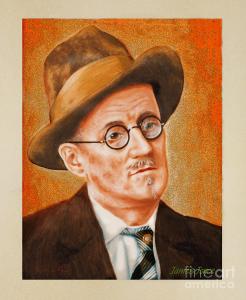 Many photographs of James Joyce show the author with his nose in the air. This mannerism is interpreted as otherworldliness, or arrogance, or as a symptom of his manifold eye afflictions, though who is to say Joyce is not simply avoiding the down draught of the photographer’s noxious fart?

Ulysses is famously an exposition and celebration of the five senses. Rarely in literature had the sensory, sensual nature of all human experience been given such constant immediacy in a novel. The sight, sound, feel, and taste of Dublin is worded up on every page. But of all the precious five, smell is the most challenging to turn effectively into words. How to transform a list of smells into theatre requires in-depth knowledge of the Ur-Text, or perhaps that’s the Ewww-Text. This was the challenge set for the Bloomsday in Melbourne committee a couple of years ago: how to write about smells.

Barry Jones, new Patron of Bloomsday, with Wayne Pearn, Director of Getting Up James Joyce’s Nose.

Getting Up James Joyce’s Nose is the result, a new play that began life as an ungainly database list of smelly references in Ulysses, before the committee turned those random lines into Joycean theatre fit for performance, and inhalation. The polymathic nature of the book makes such theatre possible, as we were reminded at the pre-show dinner by Melbourne’s own beloved polymath, the Honourable Professor Barry Jones. Joyce has put enough conundrums into his book to keep even the sniffiest scholar for years with his nose to the grindstone.

An artwork created according to a restrictive rule forces the artist to devise new ways of presenting the material. We know this with Ulysses itself: a gargantuan novel all set on just one day caused Joyce to write out the experiences with ever more elaboration, and further elaborate rules. Likewise with this play, where the rule of ‘smells only’ inspired otherwise unimaginable conjunctions. The scripting team were an olfactory factory.

Molly (Christina Costigan) identifies the smells in her bed. Photography by Bernard Peasley.

Handed such a whiffy text, director Wayne Pearn took a deep breath and turned it into a play piece of encaptivating ingenuity. Steampunk, a retro fashion that owes much to the Victorian and Edwardian encounter between industrial production and big dress sense, was a brilliant choice for costuming, not to mention outlandish props that made the point all too well. Likewise, the choice of the Melba Spiegeltent in Johnston Street, Collingwood, was a natural setting for the circus and vaudeville modes that carried the show.

The result was a poetic flow of effects, a fantasia of 1904 Dublin, seen and heard through the words of the book. There were theatrical episodes, but no normative Joycean narrative, no book sequence. The smells took centre stage, you might say, raising to the big top many ideas about smells and questions of class, of decorum (‘Immorality has a stench’), and literary convention, and a direct and comedic confrontation with early twentieth-century sexology (‘Source of life mansmell’). This loose set of episodes was held together by the Brisbane comedy vaudevillian troupe The Tatty Tenors, who sang period songs with straight faces. This was particularly hard to do with the sacrosanct Bloomsday piece ‘Love’s Old Sweet Song’ when the refrain went ‘Love’s old sweet pong’, but then Bloomsday in Melbourne has never been averse to sending itself up, or subverting the dominant cliché.

The actors, framed by Spiegeltent ticket-booth. Graphic design and photos by Bernard Peasley.

James Joyce (Steve Gome) has been portrayed in the past as the obsessive scribbler, the feminist scourge, the egotistical exile, and the misunderstood desperado, but in a circus he is the ring-master. This was Joyce at his most commanding, totally in control of his characters as they smelled the roses or put up with the horseshit. This was Joyce the extreme risk-taker, ready to push both his troupe of characters and his ideas to the limit, and beyond. He held the whip-hand, could not get enough of Molly’s teases, laughed with glee during Bloom’s morning dump, and went too far this time with his desecration of hallowed Robert Emmet’s execution speech. It was the Joyce who smells mischief in every situation. He was the impresario of this ode to odours.

Leopold Bloom (Silas James) was more like the long-suffering homme sensuel than the urban Odysseus of comic pathos. ‘The smells are taking you back’ we were told. Bloom’s most affective madeleine moments were very much the same as Molly’s, redolent of their paradise lost, and maybe soon to be regained. The disappearance of the wending street odyssey of 16 June was especially noticeable in his case, now that perfumes, scents, stinks, and reeks pervaded our present tense. For this was, indeed, theatre of the now moment, just as smells transmit their transitory meanings, then pass.

Christina Costigan, as a freewheeling Molly, in flagrante.Photography by Bernard Peasley.

It could be said of all of us that ‘We Blooms live in our bodies’, but Molly Bloom (Christina Costigan) has special ways of reminding us of this ample truth. Costigan trains in aerial hoop, which means Molly hung by a thread for much of the play, while managing to send the verbal messages and body language her fans know so well. If Molly’s whole existence is a balancing act, this was taken literally this year, as she performed suspended from the centre of the Spiegeltent. Hers was a sustained work of figurative beauties, both verbal and physical.

Steve Dawson as Nose in the jakes with Bloom (Silas James). Photography by Bernard Peasley.

A standout feature of this year’s Bloomsday was a character with the handle Nose (Steven Dawson), an escapee from commedia dell’arte who seemed to live each smell as though it were his last. This luminous dong moved about the stage, at once comically intrusive and spookily spectral. This is the sort of character to give Freud nightmares, as if Nikolai Gogol has come back to life, sticking his proboscis into every nook and cranny of the text. Dawson was made for the part, responding unforgettably to each new smell that wafted past with the Sturm und Drang of the supersensitive nostril.

And there was Matthew Dorning, a versatile actor who played the great unwashed Stephen Dedalus, not to mention Blazes Boylan, Nosey Flynn, a waiter, and the nymph Poulaphouca, the kind of costume-changing clown requisite in any self-respecting circus. His expansive repertoire put one in mind of some of the hallucinatory sections of the nighttown brothel scenes, sometimes known as Circe. As indeed did the whole show, in a space where the limits of the daily world had been temporarily let go. The show must go on!

Getting Up James Joyce’s Nose was a treat for the seasoned Joycean, who can pick up the trail in a jiffy, though my one query later was what a neophyte to Ulysses would make of all the glancing references from the book, many of them given no prior context. That said, Bloomsday in Melbourne proved once again that it is the pre-eminent international festival of its kind, capable of remaking itself, testing startling new ideas, and coming up with the latest takes on one of world literature’s greatest comic novelists, and Ireland’s greatest.

Philip is a poet, Poetry Editor at Eureka Street,  a blogger and Librarian at the Carmelite Library, Port Melbourne.

3 thoughts on “Joyce with his Nose in the Air”