A Short (and Irreverent) History of the Tatty Tenors

They will be appearing in Bloomsday in Melbourne’s Getting Up James Joyce’s Nose, 14-18 June at the Melba Spiegeltent in Collingwood.

An unusual request in the early part of 1996 brought together four ‘almost-strangers’ in a musical collaboration that is still going today. The four men were educating their 17 children at a little Catholic primary school at West Ashgrove in Brisbane’s inner-west.

The request: Would they (the three singers at first) sing the ‘Irish Blessing’ at a big open air Mass for the Irish parish priest, who was returning on holiday to his home in Ireland? Job done.

Then the primary school had a big annual Fundraiser coming up later in the year: Would they sing a few songs at the shindig? The three singers rented ‘white tie and tails’ and fronted their ‘Musos’ – The Royal Artillery Band Brisbane. ‘Now,’ said spokesman Ralph Devlin,’Singing “Tonight” from West Side Story with a rather large military band was a pretty big call and a pretty big thrill on debut. But we got away with it. On second thoughts, maybe that is for others to judge!’.

Early in the venture, another school parent, Ted Chapman, offered his services as the regular accompanist. ‘Imagine that, four blokes about the same age who loved to perform and enjoyed each others’ company,’ Ralph reflected. ‘And Teddy proved to be a very gifted musician, so we were set.’

It didn’t take long for paying gigs to come along – Conference Dinners, Wedding Receptions, Birthdays. So far there have been four Weddings from among their 17 children and they have proudly sung at each one.  Another one is planned for the Hunter Valley in October: ‘God help the first child who says they don’t want us for their Wedding.’ 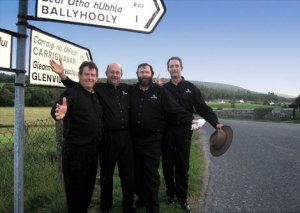 The Tattys arrive for a gig in Ballyhooly, Co Cork, birthplace of Jimmy Ahern, second from right.

An early highlight came when Bloomsday Melbourne invited The Tattys to collaborate with them in providing the music for their production staged in Dublin for the 2004 Re-Joyce 100 Festival in Dublin.

This was of course the centenary of the setting for Joyce’s acclaimed novel Ulysses. The production, an original play, Her Song Be Sung, directed by Gillian Hardy,  was staged in an intimate theatre/cabaret venue, The Sugar Club, in Leeson Street, just off St Stephen’s Green. At the end of each show, while the patrons had a drink, the Tattys would reappear in Akubras and sing six iconic Australian songs, always well-received: Ralph explained:

The Tattys progressed from popular Neopolitan Songs, into the Irish repertoire, then into some great Australian songs. We have reinvented ourselves over the years, so the music stays fresh.

The Australian High Commission in Malta heard of their trip to Ireland and invited them to sing a series of concerts in Valetta after they had completed their ‘Irish Tour’. One of the Malta performances was at the Manoel Theatre – the oldest working Theatre in Europe, having operated continuously since 1770. The performers were astonished at the strong emotional response of the sellout crowd to their Australian repertoire. Of course, many in the audience had worked in Australia in the 1950s and 1960s but had retired home to Malta.

The Tattys also performed for members of the Diplomatic Corps in Malta, at a private Dinner hosted at the Australian High Commission residence outside Valetta: here was a new challenge – singing popular Italian and Spanish songs to the Italian and Spanish Ambassadors. To say that they dissolved in tears (of laughter) at the dodgy linguistic skills of the Tattys would be an understatement, but the night was voted the ‘best-ever’ among the Embassies and High Commissions of Malta. A bit of ‘Australian Larrikin’ is recognised and welcomed the world over! 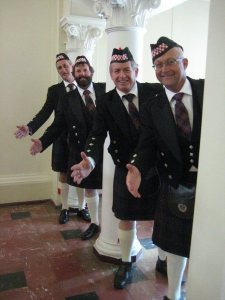 Kilted up for a performance at the Mennin Gate, Flanders, and warming up at the Victorian Parliament.

Another milestone of their 21 years came when in 2011 the Tatties were invitedto provide the formal music for Anzac Day in Ypres (Menin Gate) and surrounding villages in Belgium. The invitation came from Brendan Nelson, the Australian Ambassador to Belgium, Luxembourg and the EU, centred in Brussels. They began with a private concert for the Diplomatic Corps of Brussels, once again reducing the crowd to laughter and tears, not always for the right reasons!

Then it was off to Zonnebeke in the Passchendaele district to sing at a Scottish caeligh on the Eve of Anzac Day, which just happened to be Easter Day. ‘You see’, explained the local Belgians to the Tattys, ‘the courageous Scots relieved the Zonnebeke municipality from German occupation in early 1917 and then held it until the Armistice in late 1918’. Thus every Zonnebekean proudly wore a kilt! So did the Tattys: they each wore the kilt of the 61st Australian Battalion, the Cameron Highlanders, a militia unit formed in 1939, which helped to defeat the Japanese in New Guinea in 1942 in the battle of Milne Bay. They received special permission from the Commanding Officer to wear the colours of the Unit, formed and trained in their local suburb of Ashgrove in Brisbane, for the Tatty’s 2011 commission to perform on the Western Front.

On Anzac Day 2011 the Tattys contributed to ceremonies at Polygon Wood (Dawn Service), Menin Gate (11am and 8pm), and Tyne Cot and Toronto Road Cemeteries. They sang the Anthems of Australia, New Zealand (Maori and English) and Belgium (French and Flemish). The local crowds responded warmly to hearing their own Anthem, which is not sung very much in their country. On several occasions during the day, they had to sing with a military band they had just met and had never rehearsed with. ‘We just got away with it,’ was the Tattys’ own assessment.

Today the Tattys sing at special events, Weddings and Funerals, not appearing as often as they did a few years ago. ‘We quite like semi-retirement,’ says Ralph Devlin. ‘Our gigs can be anywhere in Australia, but are mostly in Queensland. But looking back over 21 years, we now have had enough World Tour gigs to fill the back of a T-shirt, like all those Rock Bands, how good is that?’

They have to include Darwin, Adelaide, Melbourne and the Gold Coast, though…..

The Tattys’ annual appearance for the St Patrick’s Day Concert in Brisbane still packs out the Ashgrove Bowls Club (‘it’s your ABC’, quips Ralph). The highlight each year is their rendition of ‘Fields of Athenry’, which has become the unofficial ‘Anthem of Ashgrove’:

The audience sings along. They’ve been doing it with us for years. It always raises the hairs on the back of my neck. We love that moment. 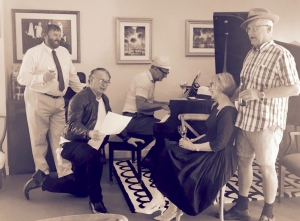 The highlight for the Tattys for this year will be their third season with Bloomsday Melbourne, Getting Up James Joyce’s Nose, directed by Wayne Pearn. This time, they will be at the ‘Melba Spiegeltent, Collingwood, from Wednesday 14 June to Sunday 18 June:

We really enjoy the Irish song repertoire – the happy songs, anyway – and are madly rehearsing in Brisbane. We get to sing with the actors in Melbourne a few days before the season opens. She’ll be right mate, we will be working hard but having a ball. We are excited for this season, even our wives are coming to Melbourne for this one!

Ralph concluded with a reflection upon the incredible journey of the Tattys since 1996:

Our kids grew up like cousins, and they stay in touch with each other. Our wives tolerate and support us, and still they enjoy the odd concert. We have enjoyed countless good times just singing and bringing enjoyment. It ain’t perfect, but it’s fun. Best of all, we are four blokes who love to perform and who enjoy friendships for life. Music has brought us together.

Compiled from interviews with the Tatty Tenors’ spokesman, Ralph Devlin, AM QC. The Tatty Tenors will be performing their unique style of musical comedy as a vaudeville-style act in Getting Up James Joyce’s Nose, for Bloomsday in Melbourne 2017, 14-18 June (www.bloomsdayinmelbourne.org.au).