A Book Review by Peter Gavin 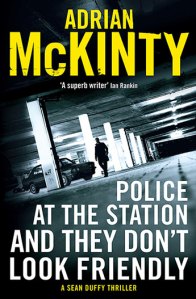 ‘Police at the Station and They Don’t Look Friendly’ are the lyrics from a Tom Waits song and is the sixth in a series by Adrian McKinty in what was initially to be trilogy about Sean Duffy a detective inspector in the Royal Ulster Constabulary in Carrickfergus, Northern Ireland. It is set in 1988.

Duffy is a smart and determined Catholic in a police force that is overwhelming Protestant; and he resides and survives in a Protestant estate because he has a ‘good relationship’ with the leader of the para militaries who run that estate. For the first time he has a girlfriend Beth and a baby Emma over whom he worries given the unhealthy lifestyle he lives where he must check underneath the car for mercury tilt bombs, and after a mandatory fitness check he is diagnosed with some problems including asthma.

Francis Deauville, a known heroin dealer, is found shot to death by a crossbow in front of his home, his young recently married Bulgarian wife Elena, sobbing over his corpse. She disappears quickly after being interviewed. All the para militaries have loads of guns, so it is intriguing that a bow and arrow is used.

Duffy and his small CID team of Detective Sergeant ‘Crabbie’ McCrabban and Detective Constable Lawson, question why a drug dealer who paid his protection money to the local para military is murdered. They wonder whether it is tied to a local IRA splinter group known as Direct Action Against Drug Dealers, but no one claims responsibility for either Deauville’s murder or for a separate crossbow attack earlier on another drug dealer who survives, but sticks by the Belfast code of omerta.

At the police station, Duffy juggles office politics, as it appears an incompetent Detective Inspector Dalziel is to be promoted as his new boss, but this does not stop Duffy telephoning him and saying:

Listen to me, Kenny, if you interfere in any further CID investigations or boss around any of my men ever again I am going to come round your house and take that gnome you have with the fishing pole in your front garden and shove gnome and pole up your arse until the wee red hat comes out your bloody throat. Savvy?

Dalziel in turn thinks Duffy is a ‘fenian’, and some in Special Branch think he is an IRA mole. The IRA, a constant presence in the series, looms large, and a split in their ranks organised from Dublin leads to a brutal attack on Duffy and his family, which will leave even seasoned readers shaking. This follows an earlier assassination attempt that is not well planned.

As with all good fictional detectives, Duffy solves the case in his own idiosyncratic way with plenty of black humour. Although it is the sixth in the series based on the Northern Irish ‘Troubles’, new readers can pick it up as a stand-alone.

The novel finishes with Duffy and Beth appearing to buy a house in Scotland and contemplating a more peaceful life away from the social problems of Northern Ireland, but there are still ten years to go before the Good Friday Peace Agreement. Surely Duffy could solve another murder case or two before he saves Tony Blair and the main peace negotiators from a group of disgruntled gunmen!