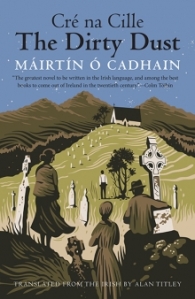 First published in 1949, it has taken 66 years for this Irish-language novel to reach monolingual Anglophones but then, like overdue Dublin buses, not just one translation comes along but two, both published by Yale University Press. The second, called Graveyard Clay (Yale University Press, 2016), is a translation by Liam Mac Con Iomaire and Tim Robinson intended for scholarly readers wanting footnotes and bibliographies.

Despite my twenty years in Ireland and one or two attempts to learn the Irish language, I have never mastered more than a dozen words or phrases, so to have this modernist masterpiece, with overtones of Joyce, Beckett and Flann O’Brien (aka Myles na gCopaleen), now open for my delight, was a treat. What a shame the Titley translation sat by my bedside for a year. I thought it would be like other Irish language classics by such people as Peig Sayers and Tómas Ó Criomhthain which I had dutifully read in translation as a way of learning about rural Ireland. It could not have been more unlike, and it would have better prepared me for life in a townland in Co Clare in 1973.

The novel is set in a Connemara graveyard in the 1940s and all the characters are dead but, golly, can they gossip! They never shut up! From the first when the just-buried main character, Caitriona Paudeen, worries about which section she’s in (10/-, 15/- or a pound), her deceased neighbours around her, continue their old feuds and obsessions. There is some reference to politics and current affairs – Civil War enmities are not forgotten and there is passing interest in Hitler’s progress with the war. However it is the local which dominates. All the past scandals are remembered. There is much bitterness about wills, legal disputes over boundaries and incursions of livestock into crops, competition about how many candles were on the funeral altar, how well the body was laid out and who did the keening. As each new body is buried, everyone catches up with the latest developments, adding new fuel to the old enmities. The Old Master finds out that his young widow has been courting Billy the Postman. Caitriona Paudeen discovers her hated sister Nell has inherited the money she was expecting. They all share contempt for the gravediggers who keep dumping people in the wrong graves, placing sworn enemies on top of or beside each other.

The Dirty Dust is mostly dialogue, spoken by unnamed people, and at first it is a puzzle to sort it out, although a cast list provided by the translator helps. However, the trick is to read it at great speed, listen to the cadences, revel in the invective and not worry too much. Eventually it becomes apparent that there are about ten parallel narratives, interwoven to propel the story. The translator, Alan Titley, likens it to switching between the channels of an old wireless. And just like the graveyard inhabitants, the reader learns of the latest developments above ground with each new burial.

I had many laugh-out-loud moments, for example, when the dead decide to form their own Rotary group and compile a list of suggestions about the talks they could give to each other. Kitty, who claimed to have lent Caitriona Paudeen a pound but never got it back, could speak on ‘The Loan’ and Guzzeye Martin, whose relatives hadn’t applied any ointments while he lay bedridden, could entertain them with ‘Bedsores’ and the Old Master was, of course, an expert on ‘Billy the Postman’. By that late stage of the novel, we are in on the joke as these obsessions are well-known to us.

Some of the jokes seem very modern such as the dig that they ought to make a Folklore Museum of the Cemetery ‘and there’d be no problem getting a grant’ (p. 197). Another joke about Jack the Lad singing a ‘new ditty: “Bunga, bunga, bunga” ‘ (p. 268) had Berlusconi overtones for me and I wondered, not for the first time, about the looseness of the translation. However, both Rotary and ‘Bunga, bunga, bunga’ may well have been in the 1949 publication. Google informed me that the first Irish branch of Rotary dates from 1911 and that ‘Bunga, bunga, bunga’ became a catchphrase and a music hall song after the famous Dreadnought hoax in 1910 when Adrian Stephen, Virginia Woolf and others pretended to be the Prince of Abyssinia and his entourage inspecting the British fleet, murmuring ‘Bunga, bunga, bunga’ in approval at each stage of the tour.

Nevertheless, it seems a very contemporary text in its raciness and language. A lot of four-letter words are thrown around. While this was common by the 1990s in Ireland, it seems unlikely in the 1940s. As far as I know, the book did not have Joycean problems with publication, appearing first in serial form in The Irish Press and then in book form the following year. However, my Irish-speaking daughter has explained that a literal translation of the inventive and insulting exchanges would not have the shock value of Titley’s take on them such as ‘piss flaps’, ‘cuntish gash’ and ‘fuck me pink’. However, I wish I had some knowledge of the original to know how much of the text was Ó Cadhain and how much was Titley, modernising it for the current times. For example, the priest’s sister, who seems to be a constant source of gossip in her forwardness and trousers, is reported in Titley’s version to have ‘hooked up with some Scottish dude in Shana kill now.’ (p. 300) Titley admits to taking some liberties with his translation and I suppose purists of the original Irish language version might be annoyed by this. Whatever the legitimate arguments over the role of the translator, I have to say that I found the liveliness and wit of the dialogue as Titley presents it captures the verve of random conversations still to be heard even on overdue Dublin buses of today.

Lovers of Joyce, Beckett and Flann O’Brien (aka Myles na gCopaleen), whose wartime columns for the Irish Times, edited in a collection, Flann O’Brien At War by John Wyse Jackson, might make an interesting comparison, should enjoy the sheer absurdity and fun of this new translation.

Author of Trinity College and Irish Society1914-1922 and St Andrew’s College 1894-1994, commissioned during the 20 years she spent in Ireland, Georgina has retained an interest in Irish matters since her return to Australia. Her most recent book, co-authored with Narrelle Morris and Tim McCormack, Australia’s War Crimes Trials, 1945-51, was published by Brill in 2016.