A project group is being formed in the coming weeks for the purpose of tracing the those descendants of the Orphan Girls Scheme who emigrated to Australia on the bride ship called the ‘Palestine’. 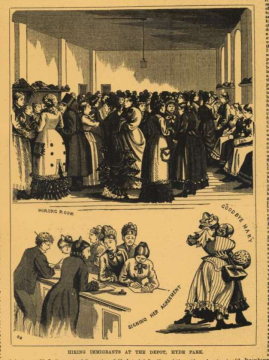 The project will be twofold.  One line of inquiry will trace the lives of the Orphan Girls’ descendants in Australia and the second line of inquiry  will hope to trace the descendants of relatives still living in Ireland  in the surrounding localities of Mountbellew, Caltra, Castleblakeney, Moylough, Newbridge, to name a few.

We would be delighted to hear from you. We have received a huge response already from the Australian side.

The story of Mary Ann Taylor

I have attached a link that I received recently from Australia. The video tells the story of one of the orphan girls Mary Ann Taylor. It is a lovely clip of the events in Western Australia in May at the conclusion of the Mary Taylor Travel Box project.

The travel box was made by prisoners at Arbour Hill Prison in Dublin.

A big thank you to Fred, Bill and Jenni and Co for sharing this.
Enjoy!