A Report by Constant Mews on the 80th Anniversary celebration of  St Carthage’s, Parkville 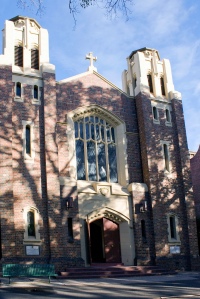 On Sunday 24 May 2015, a presentation took place at the church of St Carthage, Parkville, celebrating the memory of its patron saint, on the occasion of its eightieth anniversary.

On 14 October 1934, Archbishop Daniel Mannix laid the foundation stone of a church that was originally intended to be a chapel of ease within the parish of St Mary’s West Melbourne. The church was officially opened by the archbishop on 21 January 1935.

The presentation, by Constant Mews, Chris Watson and Miriam Uí Dhonnabhain, assisted by Siún Uí Mhaoldomhnaigh, Val Noone and Maryna Mews, was designed to tell the dramatic story of the life of St Carthage, within the context of different types of Irish saint, and explore the way he has been remembered across the centuries.

It concluded with the first public recitation of the litany of saints included within a prayer book scribed by Dáibhí de Barra in 1833, and given to the State Library of Victoria by Fr John Barry DD (likely to be a relative) in 1863. This was the first manuscript to be bequeathed to the newly founded library, as described in a study authored by Constant Mews, Chris Watson and Julia S Kühns, ‘Remembering the Saints of Munster: An Irish Prayer book copied by Dáibhi de Barra’, The Australasian Journal of Irish Studies 14 (2014), 111-29.

A distinctive feature of this litany is that Carthage/Mochuda is here identified as the last of the apostles, immediately following Patrick, Barra (Finbar of Cork) and Eolain (Finbar’s mentor, little known outside Cork). This means that the litany copied by Dáibhí de Barra came from the Cork region, probably a Franciscan house, judging by other saints mentioned in the litany.

Baptised as Carthage (more correctly Carthach), and taking the name of his mentor, Carthage the Elder, Mochuda was born in Kerry in the sixth century. He decided to follow a monastic way of life after hearing the music sung by Carthage the Elder and his disciples. While we do not know the original music that he would have heard, Miriam Uí Dhonnabhain introduced and then sang traditional songs from the Munster region, where Carthage/Mochuda was remembered.

A significant feature of both the Latin and Irish accounts of his life is that they never mention the name of St Patrick. Instead, they consider the true mentor of Mochuda to have been Colum Cille, remembered as a monk unjustly sent into exile. Mochuda, who studied at Bangor just after Columbanus left that great abbey to go to the continent, was told by Abbot Comgall that his mission was to stay in Ireland. In consequence, Mochuda established a large community, not just of disciples, but of lepers from all over the country at Rahan, near Tullamore, in the central part of Ireland.

After he had spent forty years as abbot of a successful community at Rahan, abbots of other monasteries in the region conspired to have Mochuda and his many followers expelled from Rahan. The reasons for this conspiracy are not clear. Mochuda then returned to Munster, finding a permanent place for his community at Lismore, where his name would be remembered across the subsequent centres. In the presentation the dramatic story of how Mochuda was always interested in caring for the outsider, and how he himself would always be considered an outsider, was told through readings from both the Latin and Irish accounts of the episode.

Over the centuries, the name of Carthage tended to be overshadowed by that of Patrick. Yet there was always local memory of his reputation in the Lismore region, in particular at the local Cistercian abbey of Mount Melleray, where a number of priests studied who would come out to Australia.

One of those priests was Fr John Norris (1861-1941), who came out to Melbourne in 1888 to serve a rapidly expanding diocese. A gifted writer, he was involved behind the scenes in publishing Austral Light, an important Catholic journal in the decades prior to Archbishop Mannix settling in Melbourne. After a successful period as parish priest at St Michael’s North Melbourne, he was transferred to  become parish priest of the large and important church of St Mary’s, West Melbourne in 1928.

Archbishop Mannix, who spoke glowingly about Fr Norris in July 1913 as he knew him from studying together at Maynooth, greatly esteemed this quiet, highly effective priest of the diocese.

Norris established St Carthage’s Parkville not just for the benefit of those who found it too difficult to get to St Mary’s, but also as a church that could be used by undergraduates and graduates at the University.

The Parkville church is only one of several churches dedicated to St Carthage established in Australia during the late nineteenth and early twentieth centuries, almost all by priests connected to the Lismore-Waterford region. The story of St Carthage is one that was certainly known to Fr John Norris, but deserves to be told and interpreted afresh for a different generation. The litany of saints provides a precious way in which memories that are as much local as universal are preserved.