A Feature by Chris Watson

Many Australia’s Catholic churches are dedicated to well-known Irish saints and reflect  Catholic devotional ties at the time of the church’s dedication. Churches dedicated to lesser known patron saints, however,  also offer a fascinating window into the influence these little known saints had on early  Australian Catholicism.

Little is known of Saint Carthage –  not even in Ireland – yet there are numerous churches named after him around Australia and and at least one in New Zealand.  St Carthage is also known as Mochuda (spellings vary), particularly in Irish language sources. The Irish ‘Carthach’ became the Latin ‘Carthagus’ in written documents, and so, in English, ‘Carthage’. 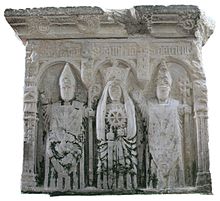 St. Carthage, on left, alongside St. Catherine and St. Patrick, in the Lismore (Church of Ireland) cathedral of St. Carthage. Photo by Andreas F. Borchert

He was born near Castlemaine, Co Kerry, around 564 and became a monk after hearing the chanting of monks while he tended his father’s swine.  He became the leader of a flourishing monastery at Rahan in Co Meath, in the Irish midlands. He was especially renowned for his care for lepers.

Because of jealous abbots and local rulers, he was forced, as an old man, to go south to Lismore in Co Waterford with other monks in his community. The lepers, already in effect refugees from their own kin, were forced to move with him. His monastery there became a famous centre of learning. The Church of Ireland and the Catholic Church both have churches dedicated to him in Lismore, Ireland.

The earliest definite date I have found for a St Carthage church in Australia is at Lismore, NSW.  Jeremiah Doyle, a young priest recruited to the Armidale diocese, had the name of its small church changed from St Mary’s in 1880. Doyle had studied at the Cistercian Mount Melleray Abbey, near Lismore, before going to All Hallows in Dublin, and thence to Australia.  Mount Melleray appears often in the story of the priests associated with Carthage churches in Australasia. Doyle was made the first bishop of the new diocese of Grafton, which he successfully lobbied the Pope to change to the Diocese of Lismore in 1900.  Although this town’s name originally came from a Scottish Lismore, Doyle took the opportunity to give St Carthage a Catholic Cathedral in Lismore in Australia, something he had not had at Lismore in Ireland for many centuries: the Catholic church in Lismore was erected between 1881-1884. The Church of Ireland cathedral has the old site. 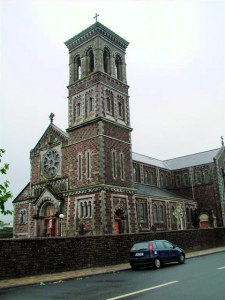 The church at Cabarlah near Toowoomba had its name changed from St Patrick’s to St. Carthage’s in the early 1890s. This change is probably associated with Robert Dunne, who grew up in Lismore, and walked to midnight mass at Mount Melleray with his father on Christmas Eve 1841. He made a retreat there before his first communion. He was in charge of the parish  Toowoomba parish from 1868 to 1880, and was at Mount Melleray,  considering joining the community when appointed Bishop of Brisbane in 1882.

Allansford, in the Western District of Victoria, has a St Carthage church which celebrated its centenary in 1990. Its founding  doesn’t  follow  the Lismore Waterford/Mount Melleray pattern, in that its founder was not from Lismore or Mount Melleray, the ‘local’ monastery for Lismore. Msgr John O’Dowd, priest in charge  of the Warrnambool parish, came from Castlemaine, Co Kerry. There is now a St Carthage Catholic Church and Church of Ireland, at Kiltallagh, St Carthage’s birthplace. The Catholic church in Kiltallagh was built about two years after the Allansford one. The Allansford church’s centenary booklet indicates a proud and active history, but makes no reference to the saint who gave the church its name.

St Carthage came to the suburbs in 1929 at Gordon Park, then a new estate on the outskirts of Brisbane. Laying the foundation stone for the Church and school, Archbishop Duhig referred to Carthage as ‘one of the best-known saints of Ireland’s golden age.’ This seems a little exaggerated. But it is the earliest reference I know to the saint other than a name that reflects the personal devotion and perhaps nostalgia of a founding priest from the south of Ireland.Information about  St Carthage is thin if non-existent in the antipodes. For example, in the press report of the dedication of St Carthage’s Church in Waikaka (New Zealand)  in 1906, there is not a word about the patron saint himself in the celebratory speeches. But the parish priest of the Waikaka church, Father Patrick O’Donnell  had also studied at Mount Mellerey. The inspiration for the name for the Church at Gordon Park came from Fr John McCarthy. His request to a monk at Mount Melleray for information about the saint, led to the publication  in Ireland of the biography of St Carthage in 1937. The Australian edition has a preface by James Duhig, the typescript of which is in the Brisbane Archdiocesan files for Gordon Park. A newer church at Gordon Park on the site is still in use.

The latest of the Carthage churches is at Parkville, Victoria. It was established as a chapel of ease for St Mary’s, Star of the Sea, West Melbourne, at the urging of John Norris,  also educated at Mount Melleray. Speakers at the laying of the Foundation stone in 1934 included Daniel Mannix and Jeremiah Murphy SJ, Rector of Newman College, who stressed the aptness of a location opposite the University of Melbourne, commenting:

It was a happy thought on the part of Fr Norris to choose as patron of the new church such a distinguished man as St Carthage, who was virtually the founder of a kind of small university. 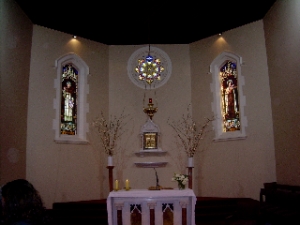 St Carthage now had, as far as I know, his first stained glass window in an Australian church. (He also has a stained glass window in St. Philomena’s chapel at the Mount Mellerey Monastery.) The pairing of his window with one of St Thérèse of Lisieux, (the patron saint of Australia and of missionaries), suggests an emphasis on him as a model for the Irish Catholic spirituality of the thirties, especially given the wording of the scroll that he holds: ‘Here shall be my rest, for I have chosen it.’  The monk, driven from home sees his place of exile as his own choice.   This quote also reminds Irish emigrants (such as Norris himself) and their descendants that while they might honour their Irish ancestry, Australia is now their home. Maybe he could be thought of as the Irish patron saint of refugees?

Since retiring as Lecturer in English at LaTrobe University, Chris Watson has followed interests in Irish language, literature and history.

3 thoughts on “A Forgotten Irish Saint, and his Many Churches”