A BOOK REVIEW by JAMES KING

Angus Mitchell:  Roger Casement, the 16 Lives  Series, The O’Brien Press, Dublin, 2014
ISBN: 9781847172648
RRP €10.39
Readers of Tinteán will be well aware that 2016 marks the centenary of the Irish Easter Rising. Much has already been written about this – the follies, the intrigues, the espionage and the heroes; and no doubt there will be much more to come, as we approach the one hundredth anniversary of those fateful, ill-fated six days which started on Easter Monday, April 24th, 1916. The Rising was spectacularly unsuccessful in a military sense, the rebels were hopelessly outnumbered, the anticipated armaments failed to arrive, resulting in a bloodbath, unconditional surrender to the British forces, and the subsequent execution of its sixteen leaders.
This appallingly dismal result notwithstanding, few would deny nowadays that the Rising triggered a political mood-swing towards its ideals, accelerating progress to the achievement at least some of them.
On the 21st January, 1919, Irish Independence was declared, followed by a civil war, but the first steps forward had been taken towards an autonomous Irish Republic, albeit still divided to this day.
As a prelude to the centenary of Irish Independence, The O’Brien Press Dublin has produced ’the first ever series of biographies of the 1916  Easter Rising’ s 16 executed men.’
Of these sixteen men, fourteen were shot by firing squad in Kilmainham gaol in Dublin, in the days following the suppression of the Rising, one (Thomas Kent) was shot in Cork, and one was hanged in Pentonville Prison London, on 3rd August, 1916, for treason. This last man was Roger David Casement, whose biography by Angus Mitchell in this series, is the topic of this review.
Readers will recall an extended book review in the January 2014 edition of Tinteán, (Roger Casement: A Real Citizen of the World). In this review, Frances Devlin-Glass (a member of the editorial board of Tinteán) assesses the novel by Mario Vargas Llosa, Nobel Laureate, entitled The Dream of the Celt. Frances’ review appraises Vargas Llosa’s painstaking reconstruction of Roger Casement’s life, from childhood through his distinguished career as a British diplomat in the African Congo, and the Brazilian Amazon, to his now notoriously flawed trial and execution. As a brief ‘bio’ of Roger Casement, the newcomer to the almost unbelievable story of this most intriguing man and his fascinating career, would benefit greatly by starting with this review, which I’ll not attempt to summarise here, except to say what a fantastic set of ingredients for a story- an aloof highly educated Irishman, who joins the British Diplomatic corps, spends twenty years in the Congo, exposes the Belgian colonial atrocities, gets knighted for his efforts and repeats the same achievements with the Amazon rubber trade, becomes obsessed with supporting the struggle for Irish independence from Britain, arranges for a German submarine to bring an arms shipment to the coast of Kerry to support the Irish Republican Brotherhood, gets arrested and charged with high treason, is belittled as a homosexual, and ignominiously hanged as a traitor in a  London gaol. What a film it would make!
Frances made the point that the strength of Vargas Llosa’s novel lay more in the descriptions of Casement’s Amazon activities and achievements, and was less convincing when it came to Irish politics and history. Possibly the reverse could be said about Mitchell’s biography, that it’s his Congo descriptions which are more immediate, including his fluctuating friendship with Joseph Conrad, and the denunciation of Belgian colonial imperialism.
Angus Mitchell’s biography of Casement, published three years after Vargas Llosa’s novel, in covering the same life, must necessarily overlap, and there are far more similarities than differences in the two works, which in essence, are both biographies. Vargas Llosa’s strategy to present his account of Casement’s life as a novel, allows him to personalise Casement’s feelings and to introduce imagined conversations and emotional reflections including dreams, which are clearly beyond the boundaries of biography. But it’s the one life presented in two books, by two authors, and in two ways, so I can’t help doing a little comparing and contrasting of the two works.
Mitchell’s biography is extensively referenced and I suppose could be described as the more scholarly of the two works, but I got the impression that Vargas Llosa had also done very painstaking research to get his facts right, although (as Frances points out), he misses the mark when it comes to interpreting or presenting the nuances of Irish political affairs of the time. He cleverly uses the technique of the novel, not to fictionalise, but instead uses his imagination to help us get a deep feeling for the personality of Casement, that I didn’t get from Mitchell.
Not that Sir Roger was the least bit warm and cuddly, but he was completely fearless and beyond reproach when it came to forthrightness, fairness and the disclosing the unspeakable evils of colonialism, both in the Congo and in Amazonian Putamayo. Although I agree with Frances that  Llosa Varga’s novel suffers badly from a ‘stodgy’ translation, I personally found it in some ways a more likeable read than Mitchell’s seemingly more scholarly biography, which was to me sometimes stodgy in a different way.
This biography is Mitchell’s third literary work on Casement- having written so extensively about his influences, his activities and accomplishments, including The Amazon Journal of Roger Casement (Ed., 1997) and Sir Roger Casement’s Heart of Darkness (2003), that from time to time one gets the feeling that, on the one hand, he has said much of it before so he chooses to be brief on detail, and on the other, what’s not said here has been said elsewhere. 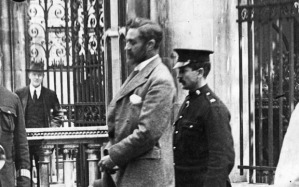 Casement on his way to Pentonville prison. Credit Telegraph

Angus Mitchell himself sounds like a most interesting character. The O’Brien Press profile advises that he lives and works as an historian in Ireland; he was born in Africa and educated in England, and from 1992-98, he lived and worked in Brazil. What better credentials to write authoritatively about the internal milieu of Casement’s professional career?  Apparently Mitchell has long held the view that the so-called ‘Black Diaries’ were forged by the British Intelligence Service as a character assassination, to quench any sympathy for Casement- not only was he an alleged traitor, they maintained, the diaries proved that he was also a sexual deviant, a promiscuous homosexual and paedophile, and an exploiter of those that he so vigorously proclaimed to protect. But in this biography, although Mitchell implies that the Black Diaries were forgeries, he doesn’t tell us enough about them, their contents and the evidence for or against their veracity. Presumably one needs to consult his other works for more details. Mitchell’s account of Casement’s arrest on Banna Strand, his trial and execution are deeply moving, and although I can’t help feeling that Casement was rather a haughty man, his courage and his convictions were unassailable. I thought Vargas Llosa’s handling of the controversial courting of the Germans and unsuccessful attempts to recruit Irish men who were prisoners of war in Germany, was more immediate, more real than Mitchell’s.

Mitchell’s biography also contains some wonderful photographs of Casement and the relevant characters in his life, and includes photographs taken and captioned by Casement in Putumayo.
All that having been said, both books give great insight into the extraordinarily complex life of this extraordinarily complex man. For readability, Mitchell wins on points, but Vargas Llosa portrays the complexities of Casement’s personality better, despite the rather clunky translation.

James studied postgraduate medicine in Dublin and has a longstanding interest in Ireland and in the works of James Joyce.