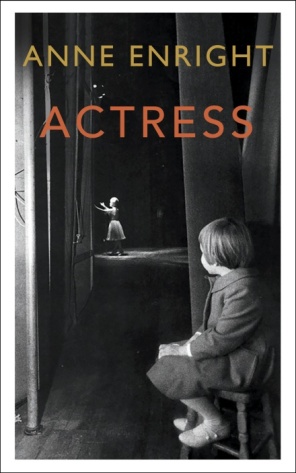 If you ever wondered why the Irish Arts Council passed over Colm Toibin and Roddy Doyle, Edna O’Brien and Sebastian Barry to choose Anne Enright as the inaugural Laureate for Irish Fiction, this book will give you a good idea. Actress is a triumph, an insight into the writer as artist, as creator of images through words, bringing times and places and people to life.

Long ago, our school readers used to have short essays or extracts from the masters – Thackeray and Hardy and Dickens, even the wonderful John D Sheridan. We were perhaps too young and too distracted by football – hormones not having yet been invented – to appreciate the majesty of what we were reading. My recommendation is that you go to the closing pages of Actress and read one of the final three chapters. Any one of them, they are about school-reader length, and while they make some reference to what has happened in the previous 250 pages, each stands on its own as perfect prose. Pick one of them, read it more than once and you have had gold in return for the small sum you paid for this little masterpiece.

The central character is the London-born actress Katherine Odell. The Americans, in a commendably creative misprint, named her O’Dell and that is how she lived her acting career. She had come to Ireland as a child; her father was a member of Anew McMaster’s body of players who brought Shakespeare and Synge to places as distant as Ballyshannon and Cappoquin and in my case, more than once to Kenmare. Early in her acting career, she assumed the public role of the shawled Irish woman, poetic but controlled, aware that it was a role, and happy to use it as needed. ‘Over time, it became a kind of national statement, or national lullaby.’

The narrator is Katherine’s daughter, and she spends much time and effort attempting to find out who her father was. Katherine married, mainly as a required part of her progress through Hollywood in those days. That marriage was brief and was over before she became pregnant, returning to Ireland to have and raise the baby. She had a house in Dartmouth Square, a place that was once part of the postal address of this reviewer. There she was visited by the great, the good and the chancers of Dublin society in the middle years of the century; they included the ballad singers and in time she became close to the men in earnest beards who spoke of kicking the English out of Ulster. Bloody Sunday in Derry is part of the story as is the burning of the British Embassy and there is a suggestion that Katherine had more than one of those involved in such activities to her bed.

The author takes the standard care to alert her readers that all the characters, with the exception of Anew McMaster mentioned above, are ‘completely fictional, and are based on no person, living or dead.’ This being set in mid-century Dublin, the world capital of literary gossip in its day, the reader is entitled to have suspicions, however. There is, for example, a (fictional) newspaper diarist named Terry O’Sullivan, described as ‘a poisonous little soak, you saw him about town wearing a tuxedo and bow tie.’ And there is ‘the Duggan fecker’ (spelled with a ‘u’)’, who was the author’s lecturer in UCD and ‘promised me first-class honours in exchange for my virginity.’ There are others and one imagines hoary sots in the Bailey or the Palace Bar today having much fun deciding who is being referred to.

Then there are little gems that pull you up short and have you wondering why you can never manufacture such felicities. There is the girl ‘with flourishing intelligence that ran so close to stupidity’; the old woman who ‘remembered very little time, and what she did recall was rinsed in saccharine’; another who ‘creaked off towards bed and another twenty years of fretful good health’. But first prize goes to the facilities in RTE that we’re divided into ‘male’, ‘female’ and ‘nuns’.

This is the kind of book that you can read one chapter at a time, because the words and phrases keep coursing through your mind, threatening to interfere with the story. At one stage, Katherine is being treated with ‘the kind of indifference you get from powerful men when they are tired.’ This magical writing will not leave you tired.

Anne Enright was interviewed by Rick O’Shea (no relation) for the 2020 literary festival Cúirt. The festival was held in Galway but, from COVID necessity, the interviewer was in Inchicore and the interviewee in Wicklow. You can find it at https://www.youtube.com/watch?v=C3fRNzLuP4o

Frank O’Shea is a member of the Tintean editorial collective.