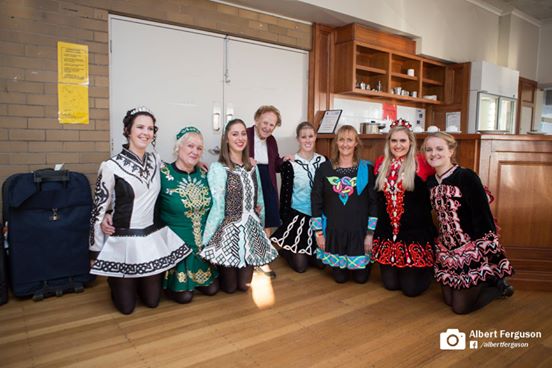 Geraldine Ryan with a group of Irish dancers dressed for competition. Photo courtesy of IrishCentral.

Janice Currie-Henderson and Geraldine Ryan, as dancers and dance teachers, have made a valuable contribution to Irish culture in Australia, yet it remains problematic that their impact has been ignored by mainstream dance and arts bodies. The Facebook page of Ausdance,  an organisation which claims to represent all dance genres in Australia, shared an article trumpeting the successes of  ‘Angus McPherson, Hugh Jackman, Meryl Tankard and Li Cunxin recognised in Queen’s Birthday Honours’. The article did not claim to be comprehensive but when I contacted Ausdance to alert them of the omission of Janice Currie-Henderson, I was promised a corrective statement but it never appeared. In January this year, the website of ArtsHub featured an article that claimed to provide an exhaustive catalogue of Australia Day Honours recipients from all aspects of the performing arts, yet the name of Geraldine Ryan was missing. The prominent Melbourne newspaper, The Age, is to be congratulated for a feature article about Geraldine Ryan’s life and career; the ABC featured Geraldine in an episode of the program ‘Backroads’ recently. Yet the posts on the Facebook pages of both Ausdance National and Ausdance Victoria have made no reference to the article or TV program and these omissions need to be questioned. Surely an organisation which claims, as Ausdance does, to ‘assist in identifying and promoting all dance traditions that exist in Australia, in recognition of their cultural importance’ would relish the opportunity to recognise the achievements of someone who has been involved in dance for as long as Janice Currie-Henderson and Geraldine Ryan?

The exclusion of these extraordinary Irish dance teachers by these organisations is unlikely to be coincidental. Each of them has been involved with Irish dance for far longer than any of the recipients from other genres and their omission from recipient lists is symptomatic of the prevailing ostracism of any form of dance outside of the Western concert dance canon (classical and contemporary ballet, ballroom and other genres of stage and screen). Ironically, Irish dance could, arguably, be included in that canon, especially since the inception of shows such as Riverdance and Lord of the Dance.

Unfortunately, this two-tiered hierarchy has been established in academic writing for some time. The neglect of Irish dance is evident in scholarly works such as The Oxford Companion to Australian Folklore (edited by Gwenda Davey and Graham Seal, 1993), which has discrete sections about Chinese, Greek and German folklore and dance in Australia, but no section about Irish folklore. The Currency Companion to Music and Dance in Australia  by John Whiteoak and Aline Scott-Maxwell, 2003, devotes a mere three pages to a broad category called ‘Irish Traditions’ yet, for example, there are four and a half pages about Italian traditions in Australia. A report on dance in Australia by Ralph Buck and Sue Fox (2019) in More than Words can Say: A View of Literacy through the Arts, that was released only last year includes the ill-informed declaration that

folk dances that were initially made and performed as social dances may now be presented in an artistic context with an artistic function. Traditional dance from Ireland being re-formed and presented as part of the ‘Riverdance’ production is an example here.

This statement fundamentally misrepresents the nature of competitive Irish step dance (the foundation of Riverdance), which has long been presented ‘in an artistic context with an artistic function’ at the many competitions that are held around the world. The correct characterisation of Irish step dance has been repeatedly documented by many prominent scholars (such as Catherine Foley in Step Dancing in Ireland: Culture and History, Ashgate, 2013) and its portrayal as a ‘social’ dance form in this report is simply incorrect. Yet the authors of this report choose to categorise step dance as a participatory genre, a descriptor which carries the implication that Irish dance is intrinsically inferior to classical ballet and other ‘staged’ genres.

The persistence of omissions and misrepresentations of Irish dance and dancers in public media forums also requires attention. World champion competitors regularly feature in journalistic outlets across the nation yet the success of dancers such as Liam Costello (Sydney), who is a two-time world Irish dance champion, have been overlooked. Australia also boasts the only combination of mother, son and daughter world champions that has ever existed: Fiona-Gaye (Snowden) Moore, also from Sydney, and her children Ceili and Jonty Moore. There are, of course, other dancers in Australia who have won world titles and have also been ignored by the media. These dancers, and the other world champions from Australia who are not named here, should have received attention from the mainstream media, just as Janice Currie-Henderson and Geraldine Ryan should have been accorded the honour that is due to them by the entire dance community. Irish dance is a high-profile genre in Australia and its achievements should be proclaimed and celebrated by everyone.

Jeanette is a dance historian and ethnographer, and has two daughters who are former competitive Irish step dancers