A Report on Brigidfest, held at Celtic@Metro (9 February 2020), by Elizabeth Malcolm 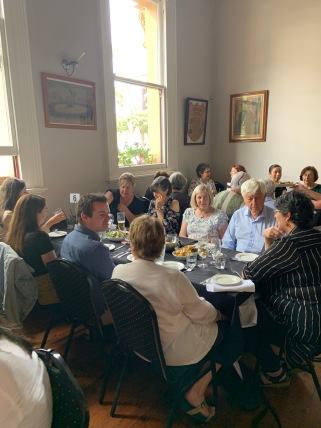 This year’s speaker at the 16th annual BrigidFest lunch held in Melbourne’s Celtic Club was Fiona Hayes. Born in County Tipperary, Fiona is a lawyer who has worked for 12 years as a magistrate in Victoria’s court system. Currently she is coordinating magistrate for the state’s Victims of Crime Assistance Tribunal.

Fiona began her talk by highlighting St Brigid’s work in Ireland promoting fairness and individual rights. That a woman could play such a prominent role in society was in keeping with Ireland’s Brehon laws, which were unusual in according women a degree of autonomy.

Fiona then described aspects of her work as a magistrate, explaining how women and children are treated in today’s court system. She stressed that much has changed over the last 20 years. Most women appearing in magistrates’ courts are victims of family violence and, in the past, giving evidence could often re-traumatise them. Now, however, far more support is available to such women. Children too have access to support services of various kinds, all aimed to reduce the stress of court appearances. Fiona admitted that the legal process can still be ‘scary’, but she said that making people feel safe is a priority these days. She next turned to the perpetrators of domestic violence and explained how the courts aim not just to stop violence, but, hopefully, to rehabilitate offenders as well. This might take the form of treatment for drug or alcohol addiction. Courts also face the challenge of assessing the risks involved in allowing offenders to remain in or return to the family home, or of deciding they should be barred altogether.

Fiona drew comparisons between laws and court practices in Victoria and Ireland with regard to family violence. While there are many similarities, she pointed to two major differences. In Ireland, if couples are not married, then the courts cannot remove perpetrators from the family home, which Victorian courts can do in these circumstances. Also, in Victoria, the police can initiate removals even against victims’ wishes, which the guards in Ireland are unable to do.

The women who appear as defendants before Victorian and Irish magistrates’ courts are similar in many respects. According to Fiona, most are victims of substance abuse; many suffer from mental health problems; and a significant proportion are homeless. Courts now offer aid to such women with the aim of keeping them out of prison. Fiona characterised this as a form of ‘social contract’. Support is available, for instance, to help women overcome drug or alcohol dependence; and, with a measure of court assistance, some women do in time sort out their lives.

Fiona thought that Brigid would approve of the positive role that today’s courts play in trying to help women in trouble, but she admitted that there is still much to be done. She called in particular for ‘cultural change’, which can only be brought about by educating boys to have more respect for women and girls.

Maria Forde added a final grace note to the day with a song of her own composition, ‘I Follow the Call’.

The lunch, which was sold out, was MCed efficiently by Karolyne Paron. In addition to Fiona’s talk, Eamonn Robinson, deputy head of mission at the Irish Embassy in Canberra, delivered a 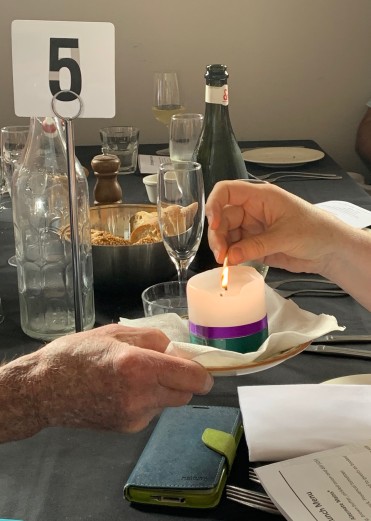 message celebrating St Brigid’s Day from President Michael D. Higgins. Helene McNamara, the Celtic Club’s vice president, offered a warm welcome to guests, while Mary Kenneally OAM paid tribute to her friend Peter Kiernan (1923-2019). A regular attender at these lunches over many years and a much-loved member of Melbourne’s Irish community, he sadly passed away in December. Finally, the occasion ended on a high note with Maria Forde singing her own composition, ‘I Follow the Call’: a stirring performance to which the audience contributed by singing the choruses enthusiastically.

Elizabeth is a member of the Brigidfest Committee and was the first occupant of the Gerry Higgins Chair of Irish Studies at the University of Melbourne.