A Poetry Scholar’s Tribute, and an Alert, by Chris Watson

On a recent visit to Ireland, coming through County Derry, I visited Home Place, which is described as ‘a major new arts and literary centre in Bellaghy, dedicated to the legacy of Seamus Heaney’.  Heaney’s poetry is often built on memories of childhood family and friends, and the physical features of the place where he grew up, so it was a thrill to go to that area. The centre offers pictures and other items which give new layers to those references. Many of these were donated by family members.

This was also a chance to visit Heaney’s grave beside the nearby St Mary’s Catholic church. The inscription reads ” SEAMUS HEANEY/ 1939 – 2013.  WALK ON AIR AGAINST YOUR BETTER JUDGEMENT”, quoted from “The Gravel Walks”, published in The Spirit Level (1996) 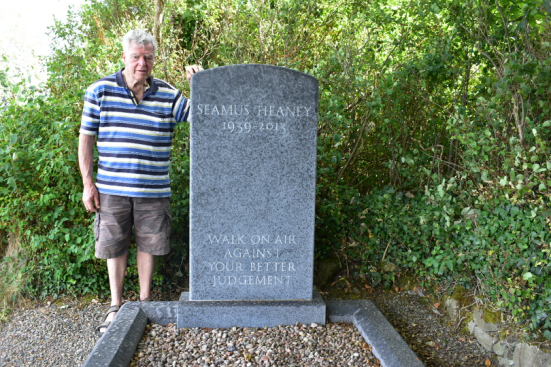 Seamus Heaney donated many of his materials to the National Library of Ireland. These were the basis of an exhibition at the Bank of Ireland Culture and Heritage Centre in Dublin. This exhibition also offered many enlightening materials. Now I know, for example, what a rain stick looks and sounds like.

As I left the Dublin exhibition, I spoke to members of a group who had set up a table to draw attention to massive road works which would seriously affect the wetlands near Bellaghy, in particular at Lough Beg which features in several of Heaney’s poems. This has been a long campaign, starting when Heaney was alive. Their materials quoted his expressions of great concern about the effect these works would have.

“It’s hard to say ‘you shouldn’t touch these places because I wrote about them’. but the fact is that these undisturbed acres are as much a common spiritual resource as they are an ecological treasure.  All over the world it is being realised that the outback, as we might call it, of the ‘developed’ areas is the last vital ditch  in need of protection; and this work of protection has to be done vigorously…”

The group’s materials, from Friends of the Earth, give more details of the plans and the damage, and suggest less destructive alternative routes for the proposed roads.  They invite people to contact the Head of Environment Unit at the European Commission with their objections. I can provide more details on request.

Chris Watson taught poetry at LaTrobe University and is a frequent contributor to Tinteán.