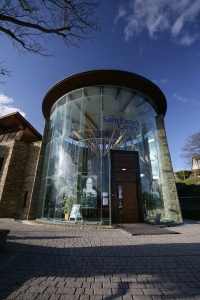 One of the more interesting things about St Patrick is his capacity to be many things to many people.

Perhaps it’s not surprising then that a centre dedicated to him – the St Patrick Visitor Centre in Downpatrick, Northern Ireland – has been able to serve a double purpose, as a source of historical information about the saint, as well as a site for community engagement across the Catholic-Protestant divide.This is reflected in its own origins – opened in 2001 in the aftermath of the Good Friday Agreement, with a permanent exhibition on the life of St Patrick, narrated by actor Ciaran Hinds.

The Centre’s Director Dr Tim Campbell said the focus on cross-community engagement was an inevitable development, based not only on the recent history of Northern Ireland, but also the status and story of St Patrick himself.

I often say to people, what better role model for Ireland than someone from Britain who’s the patron saint of Ireland? He’s really good as a cross-community figure. Perhaps for this reason, people are starting to have more interest in St Patrick, particularly community groups.

Patrick – who was born into a Roman family in Britain – came to Ireland in the fifth century, and is said to have been buried at Downpatrick’s Down Cathedral, alongside St Brigid and St Columba. The County Down area holds other points of connection to his life, including the town of Saul, where Patrick is said to have founded his first church.

Dr Campbell – who started his career focusing on Irish country houses and historical restorations – said St Patrick’s story could connect to contemporary social issues in Northern Ireland, particularly through education. With this in mind, the Centre runs a Cross Community Education Program, inviting hundreds of students across the province to learn about Patrick’s message of reconciliation, and it hosts a number of events leading up to his feast day on 17 March emphasising the diverse aspects of his identity and role in Ireland.

It has also sought to foster international interest in the saint’s history through the Friends of St Patrick, an initiative begun by Dr Campbell which has chapters throughout the world, particularly in North America. The group sends young people regularly to Northern Ireland through its Young Ambassadors Program, where they learn about the region’s history and its connection to St Patrick, before presenting a cultural dissertation on the topic.

Reflecting on the tourism potential of rural County Down, Dr Campbell said it was important for visitors to have access to information about the region’s history and the sites linked to it, including Norman tower houses and Viking settlements. One specific exhibit at the Centre – on Viking and Norman history – sought to rectify this, he added.

We put that there about five years ago, together with the Northern Ireland Environment Agency. They were keen for us to be a hub where people could come, hooked by the story of St Patrick and then go out to the sights having been to the hub.

The story of St Patrick is interesting but it doesn’t really connect to the Vikings and the Normans specifically, so that’s why we created a series of story boards so that people could find out what was happening in the area at the time and afterwards, and then go out and see these sights.

So we’re trying to connect the dots, connect it into St Patrick but look at what happened after.

Sometimes, he added, a surplus of historical monuments could make it difficult for tourists to decide of what to see, particularly since sights like the Giant’s Causeway and Belfast’s Titanic Exhibition loomed large over others.

The problem we’ve got at the minute in Northern Ireland is there’s so much to do. There’s a Viking village near here, but it’s difficult to get people to see it because they’re rushing to Belfast. The thing about Northern Ireland is that when we talk about historic towns, every town is historic, they’ve all got stories.

More information on the St Patrick Visitor Centre is available at http://www.saintpatrickcentre.com or on its Facebook page, which is regularly updated.