A story by Michael Boyle 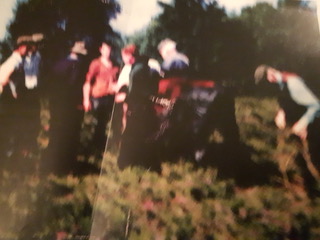 ‘Between the middle lane and Mayogall’, said my sister Marie.

’Get there before her head goes under the water!’

In the late 1980s my wife Annette and our young son Patrick were back visiting my parents’ farm in County Derry, where I would often help out in saving the hay, tying grass seed sheaves and milking cows in the evening. My brother Harry and I were weeding turnips at McGowan’s field when suddenly he stood up and pointed to our house in the distance..

‘Trouble happening at home, for the white sheet is out the top middle window.’

We sprinted up the front hill, climbed over the gate and rushed up the lane where we could hear my sister and a neighbour Bridget McCrystal sounding the battle cry for us to rescue the cow.

‘They need all the men they can get, so don’t delay.’

‘I’m putting on my Wellingtons for goodness sake!’

Before I changed I ran up to the bedroom to get my camera and put it in the back pocket of my trousers.

‘Jesus, Mickey, the cow will be drowned before you ever get there!’

I ran down the front hill, dodging through the bleating sheep. I vaulted the stile at the bottom of the sow’s field, and then I picked up the moss path and I could soon hear in the distance loud roaring, shouting and cursing. There was even an angry debate on how exactly the cow wandered into the shallow moss area. But there was a hushed silence when Andy Mulligan blurted out,

‘How are we going to get this cow out?’

John McGrann left his hayfield when he heard the commotion. Bob and Johnnie Johnson were taking a trailer load of turf from the lower moss and they stopped by to lend a hand to their Catholic neighbours. I ran up to take a close look and I could barely see the head of the Ayrshire above the muddy water. Everyone was giving orders and shouting at each other.

Then, my younger brother Harry stripped to his underpants, jumped into the side of the hole right beside the cow and took a stick with a rope and put it under the cow’s belly. Johnny McNamee and my brother Phelim grabbed the same rope and looped it under her front legs. My brother Brian and my father were up to their waists in the warm muddy water, putting a halter around the cow to ensure that its head would not fall into the deeper part of the hole. Dan McCrystal and I were helping to secure a new rope from the tractor to give more support under the cow.

Drummuck Moss was an area years ago where animals often strayed into the swamps and to my knowledge all were rescued. But this time it looked very grim and the mood was tense. I worried if this would be the one time a cow would not be rescued.

I checked my back pocket to make sure my camera was dry. I knew I would be killed on the spot if I were to produce it now. I prayed and waited and hoped the ropes were secure under the cow so as to keep her from sinking into the bottom.

Suddenly, she lifted her body a little and then all hands gave three big heaves on the ropes at once. Then, miraculously, the cow‘s front feet moved towards the edge of the bank and we knew a huge final lift would get her out. There was a big roar as the frightened animal emerged slowly on the firmer bank.

I now had no time to waste as I took my small camera from my back pocket but I had difficulty focusing. However, I did snap a few photos of the cow as it staggered away towards the grassy field. All the local farmers were still holding the various ropes and I quickly took a photo of their relieved faces.

Years later, I was told that these photographs are of great value to academic scholars interested in a rural Ireland that has long disappeared.

Michael Boyle is a native of Lavey in South Derry, now living in St John’s, Newfoundland