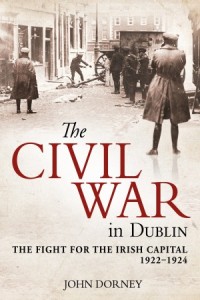 Civil wars, wherever they happen, are reminders that we humans are animals first and sentient, intelligent beings second. The conflicts almost inevitably bring out the worst in the participants, with scant regard for innocent bystanders who may have no truck with either side. The Irish Civil War of 1922-1923 is as good an example of such absurd stupidity as one would ever come across.

Here, after all, were fighters who would have died for each other two months earlier against a common enemy and who were now killing each other. It is difficult to write about it – or, indeed, read about it – without anger, something that may easily spill into apportioning selective blame. The author of this book is scrupulously careful to avoid this and indeed has managed it so well that he may annoy readers who carry an inherited candle for one side or the other.

The Irish civil war arose when one group of IRA fighters refused to accept the will of the elected parliament to accept the terms of a Treaty with Britain, finding excuse among other things in the need to take an oath to the monarch. Among the saddest aspects of the whole thing was the fact that each group felt they had right on their side and, despite some examples of old score-settling, protagonists were generally acting from high motives.

The book devotes almost a quarter of its length to the months between the Dáil vote to accept the terms of the Treaty and the first bombardment of the Four Courts in June 1922. All the main characters are here: Collins, Mulcahy and O’Higgins on one side: Liam Lynch, Ernie O’Malley and Rory O’Connor on the other. But some of the lesser players are prominent also, men and women whose names would become prominent in the early century history of Ireland.

The members of Collins’ intelligence staff, particularly his second-in-command Liam Tobin and others like Tom Cullen, Charlie Dalton and Frank Saurin were active on the pro-Treaty side as were members of his Squad (the Twelve Apostles) Paddy O’Daly, Joe Leonard and Vincent Byrne. Under Collins, each had been involved in actions in which people were killed and that grounding meant that they were particularly ruthless in carrying out government orders. There was brutality on the other side also, though it appears that the Irregulars were as much concerned with making the Free State unworkable as with murder and violence, whether random or targeted.

The author concludes that the harsh measures taken by the Free State side played a major role in bringing the conflict to an end. This had a secondary effect of leaving a residue of bitterness which would have been familiar to many of those who grew up in Ireland in the middle years of the century. Even today, the term ‘Free Stater’ is employed as a pejorative.

The book deals in a few places with the roles played by women in the fight. The Treaty side were wont to lay blame for the inflexibility and belligerence of the Irregulars on the ‘rantings of hysterical women’; the IRB publicist P S O’Hegarty described them as ‘harpies ill-suited for rational political discourse.’ Indeed, the speeches of Margaret Pearse and Mary MacSwiney during the Treaty debates were noted less for sense than for fury. However, the author here suggests that women too were divided and that ‘the anti-Treatyites among the women’s movement dominated the Cumann na mBan leadership and their intransigence caused that organisation to shrink and to split.

History has not been kind to de Valera and his figurehead role in the Civil War, although he made a number of attempts to try to stop the fighting. But once the young men took up guns, he was irrelevant and there was also the fact that, now in his forties, and twice the age of most of the protagonists, he was seen as an old man.

There is a wealth of detail in this fine book, but also a great deal of reasoned analysis. The epilogue should be put in every school reader – if such things still exist – in every Irish school. In the opening sentence, it quotes from the poet William Plomer about the Boer War, a line that applies just as strongly to the Irish Civil War,

Out of that unwise bungled war, an alp of unforgiveness grew.

Recommended, if only to caution us against criticising Syria and Yemen and other places of modern internal slaughter.

Frank O’Shea is a member of the Tintean collective