A Feature by R. E. Glass 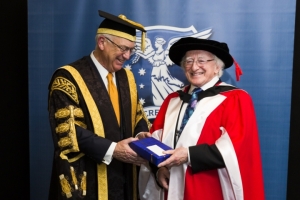 Several Tinteán readers and others in the Irish community have expressed the need for a ‘plain language’ explanation of President Michael D Higgins’ comments about economic theory in his speech after being conferred with an honorary Doctor of Laws at Melbourne University. Here goes!

It is important to note that Higgins’ remarks were largely confined to Microeconomics (which seeks to explain, for example, what we as individuals do ‘getting and spending’, businesses do in producing and selling goods- everything from bread and milk to motor cars, and why wages vary between occupations), rather than Macro-economics, (which deals with explaining, for example, changes in countries’ GDP, international trade, and the impact of Government budget policy).

Worrying current trends are that

1.‘the discipline of economics was not so dominated by a single methodology in the past as it is today’;

It is important to note that some of Higgins’ ideas have been around for a long time. Lester Thurow, for example, in Dangerous Currents in 1983 explored in detail the territory covered by Higgins, reaching similar conclusions. As Thurow writes in his last paragraph, the ‘beautiful sailing ship -the equilibrium price auction model (essentially that described in points 1 and 2 above) – is torn apart and sinking in a riptide’, requiring economics to find a new raft which ‘won’t match the beauty or mathematical elegance of the (current) sailing ship’ but will have ‘one undeniable virtue – it floats’.  More recently (2008) Richard Thaler, winner of the 2017 Nobel Prize for Economics, and Cass R. Sunstein, in the highly readable Nudge, have documented the reality that individuals do not make decisions in the manner required by standard economic theory.  And as Higgins notes, leading economic thinkers such as Amartya Sen and Joseph Stiglitz, even whilst accepting the underlying assumptions of neoclassical economics, ‘have en passant systematically undermined some of the claims once advanced by some fundamentalists, such as, for example, the assumption of a narrow rationality on the part of individuals, and assumption of market efficiency’.

Higgins’ comments are relevant in the Australian context. Nearly everything that comes out of the Productivity Commission, for example, reflects their hubristic belief that the ‘price-auction model’ is applicable to all human activities, and that no other analytical framework is relevant. On the link between theory and reality, one relevant recent example is the application by international agencies such as the IMF and the World Bank of the theories about budget management developed in advanced capitalist western countries (often with mixed success) to the problems faced by countries such as Indonesia (on which see Robert Garran’s 1998 book Tigers Tamed, especially Chapter 8).

I have been trying to imagine what would have happened if President Higgins’ talk had been given to a gathering of economists. I’m confident that they would have found it well-informed and challenging, though like him I doubt that the current approach to policy will change any time soon.