A Book Review by Frances Devlin-Glass 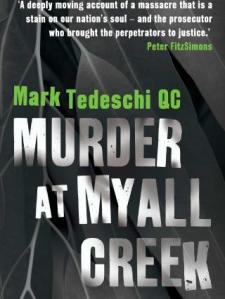 John Hubert Plunkett (1802-1869) is a name I’ve known since the 1960s when I was working on Irish-Australian man of letters, Daniel Henry Deniehy. They shared an Irish cultural background and I was aware of Plunkett as New South Wales’s first Catholic Solicitor General, and of his reputation for integrity. However, because the sources I was using were primary sources from the 1850s, and consciousness then and even just a few decades ago of Aboriginal mistreatment in the colonial era was so much less acute, I did not become aware of either the massacre  at Myall Creek in 1838, his role in the prosecution of the perpetrators, or its significance.

The efflorescence of Aboriginal histories, around the time of the bicentenary in 1988, changed all that. Another event that changed it was my accidental discovery of the memorial of the site at Myall Creek on a return trip from Queensland, via country roads (rather than the highway) in 2002.  It is a highly dramatic memorial which takes the form of a secular ‘stations of the cross’, with little way-points for remembering as persons those murdered. Touchingly, visitors to the way-stations had left notes, and stones.  The winding path culminates in a high cliff by a stream, and over that stream, the motive for the massacre suddenly became very apparent: rich farmland in a bend in the river. Whether the knowledge was different then, or I misunderstood, I’m not sure, but I understood the crime to have been that of pushing men, women and children over that cliff and allowing them to drown in the stream. It was in fact much worse, and Mark Tadeschi’s history, advertised as being of that debased genre we know as ‘True Crime’ (but in fact a very different genre of legal history), outlines in ghastly detail a tale of massacre with swords and guns and merciless hacking off of limbs and cremation to hide the traces.

In addition to the histories and visiting the site (which should be compulsory for every secondary school child), what also really emotionally awoke me to the momentous events that surrounded the court cases in which the perpetrators were successfully brought to trial for the first (and almost the last time) in Australian colonial history was Rodney Hall’s play,  A Return to the Brink, at Malthouse Theatre in 1999. However, its focus was on, properly, Governor Gipps’s role in insisting that British justice be done. I had no idea that John Hubert Plunkett had been so pivotally involved as the Crown Prosecutor in the two trials (he gambled when he insisted on a second trial, after the miscarriage of justice of the first on a technicality). Tadeschi’s excellent study rebalances the story and makes heroes not only of the fearless Governor Gipps, but also of Plunkett and and another implacable searcher after justice, the magistrate Edward Denny Day. All took huge risks as the free settlers and establishment had no wish for these trials to occur, much less succeed. It’s a stirring story, full of intrigue, strange twists and it reveals how much it cost those who sought for justice for the Wiradjuri. Tadeschi is an experienced barrister who does a superb job in explicating the different legal system in place at that time, and fully unpacks why it is that Plunkett deserves more recognition for his strategic and clever, but risky, prosecution. He also makes clear that at least one man of the seven accused, probably should not have faced the death penalty, adding pathos to the gripping tale.

Another virtue of this book is what it reveals of Plunkett’s contribution more widely to Australian political and constitutional history. He contributed substantially to civil rights in this country by ensuring that all religions, including Judaism (in his vision of the Church Act of 1836) were placed on an equal footing, by resisting the claims of Anglicans to precedence, so Irish-Australians owe a debt they probably have not appreciated to this passionate advocate of an effectively secular society which treated them as equal co-religionists, even if the racial inequities persisted for much longer (until, by my reckoning, State Aid to Catholics under Fraser and Whitlam in the 1970s). It was Plunkett, however, who had laid a deep foundation by effectively disestablishing Anglicanism a century and more earlier. He also established the Sisters of Charity in their hospitals and ensured they were open to all religions, and had a major impact in introducing the National Schools system and Sydney University. He was an all-round-reformist of a quite radical cast.

Another change Plunkett effected was to challenge the prohibition on Aborigines giving evidence in court cases. Because they were presumed to be unreliable and not able to understand  or be able to take oaths, they had been seriously silenced in court actions in which they were victims, until Plunkett, as a result of the Myall Creek court cases mounted a challenge to the system. It was, effectively, to argue that all men were equal before the law.  A key principle of British and Australian justice, not that the ideal is always operational, and extremely dutiful and driven.

Irish Australians like to think of themselves as being more benign to Aborigines than we perhaps were, but this is one colonial Irishman that we can rightly rejoice in. It’s marvellous to have this careful and appreciative biography.

By way of postscript. Plunkett hailed from Roscommon, had been trained as a lawyer at Trinity College from 1819, and gone to the bar in 1826, serving on the Connaught circuit between 1826-1832. His career launch was fortuitously timed to coincide with the relaxation of the penal laws and Emancipation in 1829, and he worked to get Daniel O’Connell elected in 1830. His reward was to be appointed Solicitor-General of New South Wales in 1833. He worked tirelessly at many portfolios in the colonial government:  I’m not sure his wife would have agreed it was a good career move, as she rarely enjoyed her husband’s company, and he died early leaving her in dire straits as his salary was not very adequate. Another curious detail about this man is that he claims descent from Saint Oliver Plunkett and although this may not be provable in the documentary record, Tadeschi does not query it, and Plunkett’s possession of the saint’s c17 chalice may give some credence to the link.

This is a really important book which enlarged my understanding immeasurably about colonial Irish Australian history, and about an ardent Irishman who shaped many strands of modern Australian institutions fearlessly and selflessly.  I recommend it highly.

Frances is a member of the Tinteán editorial collective.