[In 1970, Tom was commissioned to produce a film for LWT and Eagle Films on the great racehorse Nijinsky. One of the film crew’s first stops is Vincent O’Brien’s stables …]

Ringed by mountains and touching the picturesque village of Rosegreen, Vincent O’Brien’s training farm is called Ballydoyle. Driving down the hillside into the farm you are immediately struck by its delicate positioning and the almost military neatness of the stables, cottages and main house, a magical contrast with the wild, rich green background of the Tipperary Golden Vale. 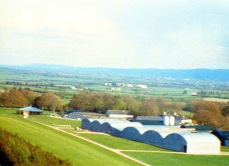 Winding behind the stables is the primary gallop. Legend has it that it is based on the turns and undulations of Epsom Downs racecourse, perhaps with the intention of giving Ballydoyle-trained runners a key advantage in a race in which legends are made, the English Derby.

We arrived in the early afternoon. Much of the stable work was now finished and the horses were in their stables, happily munching the contents of their oats bag. Nijinsky was relaxed and nibbling the rich grass in his own private paddock.

At the main house we were greeted by Vincent’s wife Jacqueline, a vivacious Australian who had become a writer and photographer in her own right. Although rather self-deprecating, she amusingly claims her proficiency in writing started by having to send a weekly progress report to each of the stable’s horse owners. Likewise she believes her photography was due to the fact that no one on their side of Tipperary owned a Roloflex camera and someone had to photograph the horses in the stables for sales and racing catalogues.

Jacqueline had been well briefed by David McCall and asked how and where we wanted to shoot.

‘We would like to interview Vincent this afternoon if that’s possible. Somewhere in the courtyard with the stables as a background, then we can come early tomorrow and film Nijinsky going through his workout and training run.’

‘Perfect, I‘ll go and find Vincent and get him ready. You know he is very shy and has had a couple of bad experiences with journalists.’

‘We’re not journalists, we are making a movie. Our job is to make Vincent look good, and then we look good.’

I’m not sure it helped. Vincent arrived about ten minutes later at the position we had set up the camera, extremely dubious about the situation in general and about us in particular. I tried to reassure him that we would not be asking questions but giving him leads into conversation: his first sight of Nijinsky, the horse’s main rivals in the Derby, his training schedule. Just general conversational remarks.

He gave me the look that said I think you still have something up your sleeve and he remained that way as we lined up the shot and balanced the sound. We were just about to roll cameras when Vincent pointed to a small cabin just by the stable block.

‘Do you mind if I just go to the toilet?’

Standing next to me watching the proceedings were two of Vincent’s stable and riding hands, Danny O’Sullivan and Johnny Babstone. 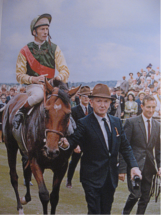 He’d be old school. Tough taskmaster. Expects the same of us. After all we are working with horses worth a lot of money. But what I like about him is he’s uncanny. He can see into a horse’s head. There’s no one on this earth who can read and see what’s happening with horses like he does. He’s always assessing them, day in day out.’
‘He just knows,’ chimed in the other stable hand. ‘He knows just by watching, if they need more or less work. Change of scene, or routine or diet. He’s got a plan for every horse in the stable.

‘He constantly tells us that all the horses are individuals and that’s how we have to treat them. He leaves no stone unturned to get the horse right. He’s tough but he’s fair.’

I looked over to the toilet cabin

‘Does he always spend this much time in the toilet?’

The stable hand replied as though it was an everyday occurrence, ‘Oh he’s buggered off, he’s slipped through the window at the back.’

Upon inspection they were right. Although Vincent was jockey-size and lightly built, he must have struggled getting through the small toilet window.

Twenty minutes later Jacqueline led back to the camera a now rather blushingly embarrassed tough taskmaster and seer of horses.

‘Vincent, when did you first see Nijinsky?’

‘Mr Engelhard asked me to go over to E P Taylor’s Windfields Farm near Toronto to look at a potential yearling purchase, a colt by Ribot. I thought, ‘My God, it’s a long way to go to see one horse! But we’d better do it.’ I saw the horse by Ribot and I didn’t like him a whole lot. In fact, he had a crooked foreleg. Then I thought I’ve come all this way I’d better see what else they’d got. I saw this other horse and he rea

lly filled my eye. I rang Mr Engelhard and told him that I didn’t think the Ribot colt was worth bothering about but that there was another colt from the second crop of the great Canadian champion Northern Dancer, and I recommended that he bid for him. Mr Engelhard bought the youngster for a Canadian record price of US$77,000 and that bay colt was Nijinsky.’

‘When you started working with him, did Nijinsky pose any problem?’

‘When he arrived at Ballydoyle, the boys found he wouldn’t eat his oats. We were puzzled and worried as it went on for some days. I called up Windfields Farm, and they told me the horse had never been offered oats, and had been fed nuts. It never struck me that a horse might have been used to eating nuts instead of oats, so I requested for them to send some of those nuts straight away and would you believe it, but the very day they arrived the horse started to eat oats. The packet still sits unopened in his stable today.’

‘How about his temperament?’

‘Well, he was inclined to resent getting on with his work. He would rear viciously when the lads were trying to put on the saddle for the early morning track so I tried something a little unusual. Rather than keep him in his stables I decided to relax him after early morning training by turning him out into a small paddock for the rest of the day. It worked wonders, he never reared again, nor tried to bite the handlers. I’m pleased to say since then he has ridden well every day, without any problems.’

‘In your opinion who in the field has a chance of beating Nijinsky in this year’s Derby?’

‘It’s a tough field. Everyone’s got a chance but two spring to mind. There’s Gyr, son of superhorse Sea Bird, one of the most talented colts to race in France in recent years. Another strong contender has to be Stintino who won the Prix Lupin and the Prix de Guiche.’

‘The Epsom Derby is a true test of stamina. Nijinsky’s breeding is not strong on stayers. But as they say only a perfectly balanced horse comes out of Tattenham corner with momentum and speed to spare. Nijinsky is perfectly balanced.’

‘Cut! Thanks Vincent; that was terrific.’

Nijinsky went on to win the 1970 English Triple Crown of St Leger, Derby and 2000 Guineas, the first horse to do so in 35 years, and a feat that has not been achieved since. Nijinsky’s owner Charles Engelhard was reputed to be the basis for the James Bond bad guy Goldfinger.