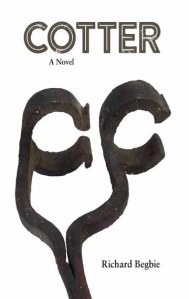 Cotter stood on the lake shore, surveying an immense sheet of water. Its surface, ruffled to an ocean by a stiff westerly, teemed with birdlife – native ducks, great black swans, and seagulls in flocks of hundreds. A small group of emus grazed at a discreet distance. From the far shore rose an abrupt, dark-clad escarpment. This was a place to stir a man’s soul.

Indeed this scene did stir Garrett Cotter’s soul, perhaps never more so since his death sentence was commuted to transportation for life. Cotter is the story of Garrett Cotter, an Irish convict who was born in 1801, transported to Australia in 1822 and died in 1886.

Formerly a journalist in Canberra, Richard Begbie, now a farming writer, has used historical sources, local knowledge and connections to produce a wonderful story. Begbie keenly describes the local landscape and environment, through both sight and sound, and detailing the often harsh conditions that faced those who settled there. This does not only relate to the physical environment but also deals with the cultural divisions that had arisen in the new Colony as well as those that originated in their homelands.

The story begins in County Cork, Ireland, in 1822 where Garrett Cotter lived with his mother and siblings. His father had recently died and life was difficult for the family. We are led to understand that his father’s death was as a result of the conflict with the land owners, in general, and the English, in particular. By way of retribution, actions by the ‘Whiteboys’ led Cotter into trouble and it was really only luck that found him on a convict ship bound for the colonies instead of the gallows – a journey made by a number of his colleagues caught up in the same action.

Cotter arrived in Sydney in November 1822. It was probably his exemplary behavior on board that held him in good stead and found Cotter immediately assigned to John Warby who worked a property at Leumeah to the south of Liverpool. Cotter took to the farm work with ease and found favour with both John Warby and his son, William, a lad nearer to Cotter’s age. Within two years and as a result of him winning one of the prize picnic races, Cotter was re-assigned to James Kenny, a local land-owner who was about to set off to try his luck on land to the south, around Lake George.

Descendants of Ongoing and Cotter with the author at the launch of Begbie’s book at the Cotter River. Aboriginal descendants were consulted in its research. Image from the ‘Canberra Times’.

It was on the shores of Lake George that Garrett Cotter developed. Not only did he learn the skills necessary to be successful in this new land, but he made an acquaintance that helped him make a name for himself in the region. While he always showed an interest in the local Aboriginals, when he met Onyong, a local tribal chief, he began to understand their relationship with country. While Onyong was not a constant physical presence in his life, Cotter forged a long-lasting bond with this man and they helped each other as much as each could or would accept. Onyong assisted Cotter when drought reduced the feed for cattle and he led him through his country, allowing him to witness scenes that few whites had seen. He showed him how to find bush foods and introduced him to new flavours.

Practical issues aside, the relationship Cotter forged with Onyong led to a much deeper understanding and appreciation of Aboriginal conflict. Begbie hints at its presence but makes clear the parallels between the Irish/English and black/white conflict over land ownership. Cotter heard that ‘all blacks are …’ as often as he heard that ‘all Irish are …’. The understanding he shared with Onyong was profound and lodged itself within his conscience. Begbie also makes it clear that this was an understanding that was not shared by all white settlers. This book should be compulsory reading for anyone living near the ACT, and everyone who is interested in the origins of conflict between black and white in Australia

The book is based on fact and while Begbie urges researchers to dig deeper, there is no real need as the factual nature of the story is well supported should the reader decide to ‘fact check’ the story.

I am embarrassed to say that I drive along Cotter Road every time I drive from my home. I have walked along the Cotter River, climbed along the wall of the Cotter Dam and taken numerous afternoon drives out to the ‘Cotter’ as the general area is known – sadly the ‘Cotter Pub’ was destroyed in the 2003 bushfires. I have never really thought about the origin of these names. I appreciate how the achievements of a person are often reflected in place names but those names rarely reveal the character of the person, the extent of their suffering or the nature of their achievements. This book goes a long way in revealing the person behind those place names. Toponyms may be an obvious legacy but this book provides much more and is a wonderful acknowledgement of Garrett Cotter’s life.

Chris Carter is a Canberra-based archaeologist who has extensive experience working on Aboriginal, domestic and industrial sites in New South Wales and in South America.