At the height of the Irish Civil War, Cork city and county were outside the control of central government in Dublin. The anti-Treaty forces controlled law and order as well as civic affairs, taking over barracks and collecting customs revenue. Roving bands burned houses and farm buildings, particularly those owned by people, many of them Protestants, who were deemed to have been unsympathetic to the national cause in the recently-ended War of Independence. There was nothing that ordinary people could do about this lawlessness.

In an effort to exert control, the Free State government sent about 1000 men of the newly created Irish army by sea from Dublin to recapture the county and restore order. Their leader was the 24-year old General Emmet Dalton. The army quickly took back control of the city and the main towns, and were enthusiastically welcomed by the local people who were fed up with the bullying tactics of the Irregulars.

This book is a reminder of how close Ireland came in 1922 to descending into chaos in the name of a semi-mystical devotion to a republic. The author describes the attempts made by Dalton to restore normality in the face of armed men who were now using the methods that had been developed during the war with the English. One tactic was to ambush army convoys and it was during one of those ambushes that Michael Collins lost his life at Bealnablath. Dalton, who had tried to persuade his friend not to travel, now held him in his arms as he died; that incident too could have seen the country descend into chaos were it not for the steadying hands of people like Dalton, Cosgrave and the much-maligned Mulcahy.

Dalton was only 17 when he joined the British army in 1915 as a second lieutenant. He was awarded a Military Cross for his leadership at the murderous Battle of the Somme and after recovering from his injuries, he saw out the war in Turkey and Egypt with the rank of captain. It was here, of all places, that he learned to play golf, a game that in later life he would play off scratch. 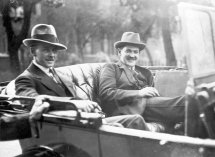 Back in Dublin, the IRA were suspicious of him, but Collins recognised his strengths and brought him to London as one of his bodyguards during the Treaty talks. He was the person responsible for liaison with the British as they gradually abandoned their posts in Ireland and was in charge of the shelling that led to the recapture of the Four Courts from the Irregulars.

Having brought Cork back inside the Free State, Dalton resigned from the army and was given the job of Clerk of the Senate, a post he held for three years without ever distinguishing himself. The remainder of his life he spent working mainly in the film industry with giants like Sam Goldwyn and Carl Foreman among others. He was responsible for founding the Ardmore studios in Bray where films like My Left Foot and Braveheart were produced. When he died in 1978, no member of the Fianna Fail government of the day attended his funeral; a year later those same people elected Charles J Haughey to lead the country.

It is surprising that this is the first biography of Emmet Dalton, a man who gave a greater service to his country during the war of Independence and the Civil War and in his later civilian life than most people you would care to name. His story is one of derring-do and courage and unbending adherence to principle. This book by former journalist Sean Boyne is a long overdue tribute to him; it is detailed, emotional at times, and reads like a thriller. Recommended.

Frank O’Shea is a member of the Tinteán editorial team.