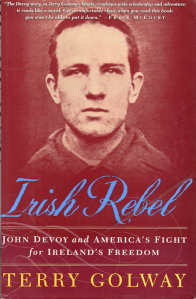 The photograph on the front cover is a police mug shot. But there is nothing apologetic about the man shown, no downcast eyes or defeated look; instead, there is a look of cold defiance, as if telling the world, “you haven’t finished with me yet.” And indeed, the British state, who were about to hand down a long sentence for the prisoner, would hear much from John Devoy in the more than six decades left to him.

He spent five years in English prisons before being released on the understanding that he would live anywhere except within the United Kingdom of Great Britain and Ireland. Among the others released with him was Jeremiah O’Donovan Rossa; in the years to come, the two of them would combine to create havoc. Much of that was among the huge Irish community in America, reckoned to be in excess of two million, but they were also lifelong leaders in campaigns for Irish freedom.

One thing which the centenary of the Easter Rising brought home to students of that event is the core role played by the American Irish. The heart and central figure in the preparations for Easter was the first signatory of the Proclamation, Tom Clarke, an American citizen and close friend of Devoy. The organising body was the Irish Repub

lican Brotherhood (IRB) which worked hand in glove with their US equivalent, Clan na Gael, of which Devoy was the main driver. They would provide much of the money needed to buy guns and uniforms for the Volunteers.

But Devoy’s path was far from smooth. As Brendan Behan famously said, the first item on the agenda of any Irish organisation is ‘the split’ and much of this book describes the internal squabbles between the different people and groups wanting to help Ireland. Devoy fell out with O’Donovan Rossa and with Michael Davitt, though he managed to maintain a good relationship with Parnell. He had longstanding rows with the Irish-American leaders outside of New York, people like McGarrity and McCartan; all of these disputes are covered in this book.

However, Devoy’s major falling-out was with de Valera, whose 19 months in America were a disaster, a fact that is acknowledged by historians and by Dev’s own biographers. For all his thunder and intemperate language, the die-hard Fenian Devoy understood that there was a proper way of dealing with US politicians, a task in which he was a consummate professional. To give one example, he was able to put a resolution to the Republican Party for inclusion in their 1920 election manifesto, something which the Democrats would have to copy or improve on. Dev and his allies put an alternative proposal which was turned down; he couldn’t understand why and tried to use his muscle to force it through. The result was that he was again repulsed and in the fallout, Devoy’s resolution was also removed. The Democrats saw no need to mention Ireland either, so the two conventions of 1920 went without a mention of Ireland.

Despite his Fenian past, his IRB and Clan no Gael memberships, his constant drumming of the word republic, Devoy was a pragmatist and supported the Treaty of 1921. For his enemies, this was presented as compromising and as this writer puts it,

Compromise would inevitably demand scapegoats, for the Irish Republic was not some diplomatic negotiating point, but a mystical, martyr-producing organism that could trace its bloody and tragic ancestry to Theobald Wolfe Tone. … Someone was going to answer to the ghosts of Irish rebellions past.

Devoy did visit Ireland in 1925 and was rightly feted wherever he went. He also met again the woman who had promised to wait for him when he began his prison term half a century earlier. She did wait twelve years and then married. Many years later, Devoy was told that she had died. In that return to Ireland, she, now in her eighties, contacted him and they had an emotional reunion. He again proposed

marriage, but this time she decided that they had missed their chance. Be warned that this final chapter may send you looking for your tissues.

This is a wonderful book. At times it reads like fiction, at times like a war story. There is political intrigue, hidden spies and constant economic trouble. Devoy’s causes included the Fenians, the Land War and the Parnell split as well as 1916 and the War of Independence, but he had almost as much trouble in dealing with the other well-meaning leaders in America. Reading this book may set you looking for biographies of other characters like Cohalan and McGarrity.

Most photographs of John Devoy show a man with bushy beard and deep-set frown, and there are many of those pictures included here, but that defiant front cover is the one that most closely describes the subject of this wonderful biography.

Frank O’Shea
Frank  is a member of the Tinteán collective