A Report on the annual Famine Commemoration

An exceptional feature of this year’s commemoration – the eighteenth – of the Great Irish Famine (1845-52) at the Famine Rock on The Strand at Williamstown on Sunday 20 November was the range of impromptu musical items. Indeed, despite some weaknesses in the preparations for the day, many people stepped up to fill the gaps, creating a day of palpable connection with generations past.

As master of ceremonies I had the honour of acknowledging the Bunurong and Woiworung people of the Kulin nation as the traditional owners and custodians of this land. I took the opportunity to recall the leading role of the late Victor Briggs of the Bunurong people in the unveiling of this monument in 1998.

In this centenary of the Easter Rising when we remember those who fought for Ireland’s freedom, I suggested that we have a special duty to remember the Indigenous patriots who fought to defend Australia from British invasion. I was greeted by applause when I stated that the Australian War Memorial needs a monument to them. 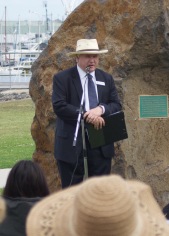 Councillor Peter Hemphill, deputising for mayor Sandra Wilson, also paid his respects on our behalf to Aboriginal elders past and present before welcoming visitors. He formally welcomed the Ambassador of Ireland, Breandán Ó Caollaí and his wife Carmel Callan. He then commented on the relevance of the event to present-day concerns, and mentioned some of his own Irish family history. (Later he explained to me that in the past couple of years he has reconnected with a large clan of the Hemphills in USA).

Among several apologies, one from the Dublin-based filmmakers Siobhán Lynam and Barrie Dowdell deserves a mention in this report. Over the past year or two family historians and the Irish Ancestry Group of the Genealogical Society of Victoria have gained a lot of benefit from showings of Siobhán and Barrie’s stunning DVD about Irish women sent to Tasmania, which is entitled Mná Díbeartha/ Transported Women.

But back to the music. The advertised performers, Leo Kelly, Cora Browne and Vince Brophy were as good as if not better than ever. Cora and Vince entertained people as they were arriving and later rendered topical numbers including Vince’s own dramatic composition ‘A Decent Set of Girls’ – perfect for a day marking the anniversary of the 1848 arrival in Hobson’s Bay of the first boatload of young women from Irish workhouses at the height of the Famine, as part of what has become known as the Earl Grey scheme.

Cora seemed to silence even the passing motor bikes with her beautiful rendition of Sean Ó Riada’s ‘Ár n-Athair’ (‘Our Father’). Leo, who again travelled down from the upper Yarra Valley, played an appropriate lament on the uillean pipes.

The first of several unannounced players was Julian Harrison who added  his lyrical flute to Vince and Cora’s voice, guitar and bodhrán. In Roscommon there is a statue commemorating the dedicated service to Famine victims by Julian’s great uncle Harrison, a medical doctor.

Two competent tin whistle players also volunteered, Luiseach Browne and Kathleen Kernan, the first a fresh talent, the second a stalwart of the Famine commemorations. Janet Kelly came forward to give us ‘The Wind that Shakes the Barley’, a song of love, mourning and resistance, the title of which was used by Ken Loach as the title for his searing film about the Irish Civil War.

Surprise song from the Ambassador

Ambassador Breandán Ó Caollaí speaks of the importance of remembering the orphan girls. Later he delighted the assembly with his singing.

However, the biggest musical surprise was Ambassador Breandán Ó Caollaí, who had been in Australia just six weeks but felt sufficiently at home to not only deliver a moving speech but also to return to the microphone for a delightful unaccompanied song. He chose the humorous, and philosophical, ‘Preab san Ól’ (literally, ‘Jump into the Drinking‘) with its alternating Irish and English-language verses. The opening lines are worth quoting:

‘The many methods of making money/ Leave little leisure for having fun/ And think how long you’ll be stretched and breathless/ Alone and lonely beneath a stone’.

In his speech Ambassador Breandán took an inclusive and humanist approach, linking the sufferings of the victims of the Irish Famine with those of people displaced today.

He singled out for comment the lines from folk-poet Máire Ní Dhróma which are inscribed on the Rock:

‘Ní hé Dia a cheap riamh an obair seo/ Daoine bochta a chur le fuacht is le fán [God did not do this,/ putting people out of their homes/ hungry and wandering].’

When I later seconded his words, a lot of heads nodded at my remark that these lines are a form of liberation theology.

The Ambassador spoke for all those present in paying a special tribute to the work of Debra Vaughan in arranging the past six commemorations. The Ambassador also laid a sheath of flowers at the Rock in memory of those who had died and also of those who had migrated. In a relaxed style Breandán and his wife Carmel Callan then spent a couple of hours meeting and talking with those present.

New studies of the orphan girls and the Famine

Last year I remarked on the important steps taken by Kay Caball in Kerry, Anthony Begley in Donegal and Barbara Barclay in Mayo in tracing more of the orphan girls back to their home townlands in Ireland. This year I spoke further about Barbara Barclay’s website:  thanks to Debra Vaughan for giving us that link. Barbara, an Australian living and studying in County Mayo, has been researching the 137 young women from Mayo sent to Australia in the orphan girls scheme.  Six of them came on the Lady Kennaway, Bridget Benson, Bridget Brown, Mary Cogan, Elizabeth MacNamarra, Mary MacNamarra, Catherine McDermott. Like others, Barbara has found it very hard to dig out information about the lives of the girls in Mayo before departure, but has traced three to their townland of origin.

Sales of our booklet, Melbourne and the Great Irish Famine, were brisk. Clare Saxby came to have a chat with a few of us about her current project of writing a novel about the orphan girls. We discussed such things as Kirsty Murray’s Brigid Fire and Evelyn Conlon’s Not the Same Sky and agreed there is room for more.

Siobhán O’Neill and family attended to make available the resources of Ireland Reaching Out, a network which helps family historians and visitors connect to the people and places related to them back in Ireland.

An interesting development in Irish studies this year is the attempt to document evidence of evictions during the years of the Famine. Dr Ciarán Reilly, author of several books on the Famine, is the coordinator for this extraordinary project. You can google Irish Famine Eviction Project. Also of note in the past twelve months was the success of Jennifer Harrison from Brisbane in having her article on the Earl Grey scheme published in the widely-distributed international magazine, Irish Roots.

This year Debra Vaughan withdrew from organising because of illness. We were delighted that she was able to join us on the day and pray that she returns to good health.

Dally Messenger, the well known leader of the civil celebrants movement, kindly loaned us his public address system. Come to think of it, the event had elements of what Dally calls secular spirituality.

Next year we will form a committee to share the work around. I appealed for people willing to serve on that committee to give me their names and contact details and I would be happy to hear from others. I plan to convene a meeting in the second half of June to arrange next year’s event. For future reference, Mary Doyle collected an attendance list.

A day of surprises was capped off by Margaret Hamilton, a Melbourne resident, telling the gathering that she was the granddaughter of T J Kiernan, the first Irish Ambassador to Australia, who arrived here in 1946 and contributed much to Irish Australian life. Ambassador Breandán was especially pleased to meet her because the Embassy is holding some events to mark the 70th anniversary of diplomatic recognition of an independent Ireland by Australia.

I have left to the end of this report a mention of the feature of the day, which, though we do it every year, never ceases to move both newcomers and regulars. I refer to the custom we have of asking people present to name the young woman from whom they are descended, their relationship to her and which ship she came on.

To conclude here is a list of those whom Mary Doyle managed to note down – please allow for and notify any inaccuracies:

Sarah O’Malley Smith on the Pemberton (Debra Vaughan); on the same ship Catherine Bryant and Jane Troy; Lydia Barbour on the Diadem; on the same ship Margaret Hunt (Ian Bowker) and Isabelle Brown (Jenny Gigacz); Ellen Desmond and Margaret Driscoll on the Eliza Caroline; Catherine Ryan and Catherine Fahan (Ken Evans) on the New Liverpool; a girl Moran from Galway; and a Margaret Sheehy.

Among the descendants of Ellen Desmond was 88-year-old Margaret Palmer, a great-granddaughter, and Val Moran, a great-granddaughter, who recently found out about Ellen’s voyage from famine workhouse to Victoria. Margaret and Val seemed to be typical of those attending in that they were proud of their ancestors and delighted to attend a ceremony which reconnected with them.

Val is an Elder of the Irish community in Victoria, a Research Fellow at the University of Melbourne and holds an Honorary Doctorate from the National University of Ireland.