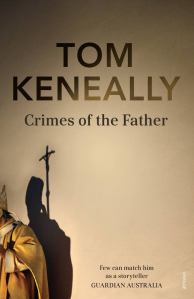 In a 2015 biography of Tom Keneally, we learn that he was within a few weeks of ordination when he decided that the priesthood was not for him. So he may be as close as it is possible to get to someone who understands the kinds of pressure on men who initially choose a celibate life, but wisely walk away from that commitment. There is little doubt that what we read here is close to the actuality of priestly choice and pastoral life. It is also a look at what it means to be a good priest and the way that doctrinaire episcopal authority controls the lives of these men.

There are two things that are useful to know about the book. The first is that it is not written in anger as many stories that deal with sexual abuse by clergy tend to be – think John Boyne’s A History of Loneliness, for example. The second is that it is set in 1996, at a time when public discussion about clerical sex abuse in this country and overseas was not as common or as aggressive as it is today.

The central character is Frank Docherty, a member of a religious order of priests. He was banished from the Archdiocese of Sydney in the heady days of the early seventies for his advocacy of human rights and his opposition to the Vietnam War. He was able to live with his order in Canada, where he continued to practise as a priest while pursuing studies which saw him take up a university position and some professional work as a psychologist. Now, a quarter of a century later, he is seeking a return of the faculties that would enable him to minister again in Sydney.

As he is preparing to give a paper at a conference on sex abuse, the church in Sydney is involved in a complicated legal case with a man who was abused by a priest when he was a child. He refuses to sign a confidentiality agreement and is now suing through the courts, with the church trying to limit damages by legal avenues involving trusts. The monsignor who is leading the church defence is Leo Shannon who, unknown to those involved in the case, was himself an abuser.

As with much modern fiction, the story moves backward and forward in time; a feel for the topics it addresses is given by some chapter headings: ‘Docherty becomes a priest, 1960’, ‘The Case of Sarah Fagan, early 1970s’, ‘Maureen Breslin remembers Humanae Vitae, 1968’, ‘The Past Sins of Monsignor Shannon, early 1970s’ and ‘Docherty gives his Lecture, July 1996’.

There is a great deal of background on Catholic custom and practice, while Keneally’s own experiences are found in asides like his description of prayer as ‘the shallow comfort of archaic forms and old pronouns’ or his account of a good priest who ‘knew himself and his frailties, rare in a man who did not have a wife to subject him to self-education.’

All the action takes place in a three-week period in 1996, at a time when criminal charges for sex abuse were still rare and when legalism rather than compassion characterised the treatment of victims. An unusual feature of the story is that all the main characters are professional people – teachers, lawyers, psychologists, a physicist, a business tycoon – mostly of Irish Catholic background, with the Irish part often stressed.

Although longwinded in places, the story moves along smoothly to a conclusion that is satisfying, while avoiding the temptation to vengeance or bloodletting. At a time when the subject is often characterised by fury rather than logic, this is a book that puts a human face on a serious and painful problem.

Frank O’Shea is a member of the Tinteán Editorial Team and a contributor to the Irish Echo and Fairfax Press.