‘You grew up on a street beside the river Liffey in inner city Dublin. Oh Nan how exciting’.  As I listened to my teenage Australian granddaughter I could clearly imagine what her thoughts were.  Was Dublin an older version of Perth with its high rise apartments,  magnificent views of the Swan River or the Indian ocean, and hundreds of restaurants offering a smorgasbord of ethnic choices.   I smiled as my mind wandered back to my experience of inner city life as a child in 1940s Ireland. 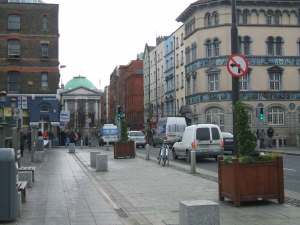 My family lived in cramped conditions in a low socio-economic environment, in an area that was a historical wonderland.   None of this was at that time significant to my young mind. I was born in 1939 and lived on the south bank of the river Liffey in inner city Dublin until I was almost fourteen years old. Our family home was two rooms on the first floor of 25 Parliament Street, a few metres from Grattan Bridge and the River Liffey at one end and City Hall and Dublin Castle at the other. This is in the heart of Temple Bar which is now Dublin’s cultural quarter. There were, at that time, depressed areas scattered across inner Dublin city with big old houses as home to anywhere from six to ten families. As in those days families were large, this could mean huge numbers of children.  Many of these crowded buildings were beautiful Georgian houses which had fallen into disrepair.  The streets were playgrounds to thousands of children across the city.

Directly behind Parliament Street is Lower Exchange Street. It was during the building of an apartment block here in the 1990s, that the remains of Isolde’s Tower was discovered.  Isolde, according to Celtic legend, was the Irish princess who was supposed to wed England’s King Mark, but who drank a love potion and subsequently fell in love with the knight Tristan, who was delivering her to England.  These two were the subject of Wagner’s opera Tristan and Isolde.  The building still went ahead, with just a small locked gate to allow a view of the remains. The apartment building is named “Isolde’s Tower” and is behind the house I grew up in.  On the same street is St Michael & John’s Catholic Church. My maternal grandparents were married there and it was the parish church for many members of our family who lived in the district. It is now recognised as an important 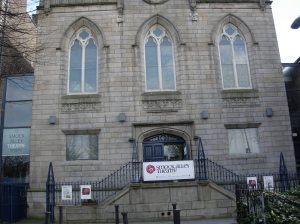 historical site. Prior to its life as a Catholic Church it had been The Smock Alley Theatre which was built in 1662.  The Theatre closed in 1787.  In 1815 the Catholic Church bought the old theatre building to build a church in order to amalgamate the two parishes of St Michael and St John.  Much of the old building was retained in the new church. In 1989 due to falling numbers of parishioners the church was deconsecrated.  It has since been restored as Smock Alley Theatre.

Next door was the school I attended.  A big old two story building, it had six rooms, three up and three down.  At the back of the building was a school yard that was totally inadequate for the number of students enrolled. We were issued with one reading book for the year (it took me less than an hour to read it from cover to cover) which meant much of my time was spent in boredom. During my childhood in this area, West Essex Street was commonly referred to as ‘Smock Ally’ but I never knew why.

During my childhood in this area, Christchurch Cathedral (Church of Ireland) is about a five-minute walk from my old family home. It is a magnificent building in well-kept grounds. During my childhood it was one of my favourite haunts. Wandering around in this beautiful church and playing in the grounds gave me hours of pleasure. In 2013, while visiting Dublin, I was indignant when an attendant demanded a fee to allow me inside.

To many of the local children Fishamble St was our favourite playground. It got its name from the fish and meat markets which were located there in the seventeenth century. It is a sloping street running from Christchurch to Wood Quay. At the higher end of the slope there was a steel works with an adjoining house accessed by several steps. This was a regular meeting place where we planned all sorts of play or mischief. But long before that, in 1742, it was where George Fredrick Handel first played The Messiah in a music hall that was on the site. The house is still there; beside it, behind the original entrance gate to the music hall is a block of apartments with a statue  of Handel in front of the building. On the other side of the old house is The George Fredrick Handel Hotel.

Dublin had its share of characters who often provided entertainment for us children. One was ‘Johnny Forty Coats’ a ‘tramp’ who walked the streets all day every day and whose sleeping quarters was any dry corner he could find.  The all-time favourite that lives on in the social history of Dublin was ‘Bang Bang’.  He roamed the streets of the city daily carrying his ‘gun’ which was a large black key. His routine never varied. He ran along the street in and out of every shop shooting’ everyone in sight with his ‘gun’ Then on to a bus where he would run up and down the aisle shooting all the passengers, off the bus, and then on to the next one to repeat the performance. Never once did I see a bus conductor refuse to allow him on the bus.  He even managed at times to get into theatres and ‘shoot’ the actors on stage which added to the general enjoyment of actors and audience. In the 1970s the Abbey Theatre performed a play about the history of Dublin entitled From the Vikings to Bang Bang.   Bang Bang’s key is now exhibited at the Dublin City Library and Archive on Pearse Street, Dublin 2.

A common sight was the barges from Guinness on their way to the docks to deliver the beer for export.  Also common was the array of local children hanging over the Liffey walls yelling at the long-suffering crew.

Another wonderful sight was the long dray carts piled high with barrels of Guinness and pulled by two large beautiful Clydesdale horses along the Quays from the brewery to the many drinking venues on almost every city street in Dublin at that time. Heads held high with gleaming brass adornment on their harnesses, the Clydesdales’ rhythm of the large hooves on the road was a frequent and relaxing sound as they made their journey down through the city.

In October 1952 when I was almost fourteen years old we moved to a corporation estate in Bluebell, a suburb about six kilometers out of the city.  The allocation of a corporation house was a dream come true for every over-crowded family, but for many, that dream soon became tarnished.  At first there was great excitement at having a whole house to move around in, including a bathroom and a large back garden to hang the washing out, but reality set in far too quickly.  The move created more financial difficulty for most, as new housing estates did not always have available places in nearby schools. This meant the increased burden of finding extra money for bus fares for children to attend school. Another, probably unforeseen, impact was that having a place in the community was important, moving even a short distance, meant virtual cut off from the old neighborhood.  On a housing estate where everyone was a new resident, establishing connections took time.  These difficulties were exacerbated in our circumstances by the fact that the small Bluebell housing estate was built directly behind a row of upper middle class homes on the main road. The owners of these homes did not welcome our presence at all, and in retrospect I can sympathize with their feelings. Discontent among residents on these new estates was talked about by many people in the larger community and in the media, without any understanding of the misery involved. Often it was seen as the poor not wanting to help themselves.

That first Christmas in the suburbs was a sad and lonely time for me, a form of social isolation. All of my experience of life until then had been inner city crowded living conditions, busy streets, and so many interesting places to explore. This was the case with most of the new residences around us who had all come from similar circumstances.  Although we were now living in much better conditions inside our homes, the outside view with back and front gardens divided by iron railings was not in any way welcoming.  The noise and activity of inner city life was replaced by long winding roads with row after row of houses all exactly the same. There were of course many benefits, even very young children could be allowed outside on to the street to play as it was possible to keep an eye on them.  But this move of just four miles was almost the equivalent of moving to another planet. There were a couple of families who did actually move back to the inner city crowded conditions.

In June 1953 I left school, it was not my wish to do so.  However I had completed the full education program the primary school system offered a year before that. At that time fourteen was the legal school leaving age. Free secondary school education for all did not become available in the Republic of Ireland until 1967, which meant that I and thousands like me were deprived the benefit of what is now accepted as a basic education.

Kathleen, my mother’s sister, who had lived close to us in the city had been rehoused in Ballyfermot. Although the distance between the two suburbs was about three miles, visiting her took two buses there and back.  My mother missed her sister very much so in April 1954 a little over a year and half after the move from the city, we moved again to a smaller house in Ballyfermot on the street where my aunt and her family lived. Although I was just fifteen years old at that time, I already knew I would leave Ireland as soon as I was old enough to do so. In 1957 aged eighteen I boarded the boat from Dublin to Holyhead on my journey to live in London.

Marie went to live in London as a teenager. In 1969 she migrated to Perth, Australia, with her first husband and three young children, forming a connection with the local Irish community. She has begun to record her memories  mainly to nurture an awareness of their Irish ancestry in her five adult grandchildren and their future descendants. She has been a member of Trinity School for seniors since the late 1990s and facilitates a group on memoir writing.