A BOOK REVIEW by Brian Gillespie

Seán Enright, After the Rising : Soldiers, Lawyers and Trials of the Irish 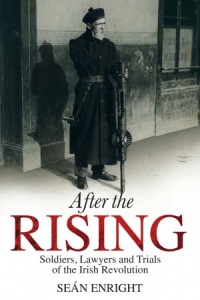 This is Seán Enright’s third publication on the trials and legal system of the period 1916 – 1921, his other works being The Trial of Civilians by Military Courts: Ireland 1921 and Easter Rising 1916: The Trials.

After the Rising bridges the gap between May 1916 and the Truce in mid-1921.During this period the justice system appeared to be in constant crisis as the authorities struggled to deal with the growing insurrection in the years following the Easter Rebellion. Enright takes the reader on a legal journey through the various stages from an attempt at conciliation just after the Easter Rebellion was quashed to Special Powers and Martial Law taking over from a system that could no longer function. This was the most lawless period in Irish history where the crushing of the Easter Rebellion gave rise to the War of Independence.The opening ‘Dramatis Personae’ creates a helpful CV of the main players in the justice, policing and military system of that time.

The tale begins with Asquith calling an end to the executions following Connolly and MacDiarmada being shot on May 12th 1916. Next on the list for execution were Thomas Ashe and Eamon DeValera. Over 160 other prisoners were tried by Court Martial in Dublin, the oldest 59 and the youngest 16. Only one was a woman! Hundreds were rounded up in the provinces and those convicted joined the Dubliners in a journey to English prisons. The author then traces the deliberations of the Royal Commission into the causes of the Rebellion and the attempt at conciliation where many death sentences were commuted. Of these prisoners only Casement was put to death.

In the next five years the reader gets an in-depth look at many trials, both major and minor as the justice system could not cope and eventually collapsed being replaced by Martial Law, Internment without trial and at its worst, lawlessness.  As the War of Independence grew, the authorities found it harder and harder to find a jury that would convict in capital cases. Trials were moved from disturbed areas, special juries appointed and eventually court martial under the Defence of the Realm Act.

Finally, to add to the chaos, by 1920, as the crisis worsened, there were actually four legal  systems operating in Ireland. Firstly, the British criminal justice system was operating mainly in the north. Secondly a system with much wider powers under the Restoration of Order in Ireland Act was in place. Thirdly, a system of courts set up by the Dáil and as the crisis came to a head in 1920 the Army brought in military courts in the south-west that were not sanctioned by law. There were 60,000 soldiers on active service and 15,000 police at the peak of the crisis combatting a guerrilla campaign. Regional Magistrates totalled 66 working with enormous case loads.  Those interned without trial numbered 3500. Hundreds were serving long sentences. When the Truce came in August 1921, there were 42 on death row.

The second half of the book gives an account of some of the more significant trials of the time such as Eoin McNeil, Roger Casement, Constance Markievicz, the Bloody Sunday trials and those of many more lesser-known revolutionaries.

Seán Enright was called to the Bar in 1982 and is now a circuit judge. His in-depth knowledge and passion for this subject has provided a vibrant account of a tumultuous time in Ireland through the disintegration of the legal system.

Donegal-born, Brian has been involved with the Irish History Circle and Irish theatre for many decades in both Perth, Brisbane and Melbourne.