One of the stories a friend of mine from Dublin told me when we first met was about her grandmother and what she had done in 1916. I was in Dublin researching medieval women, so I didn’t then know much about the women of 1916. My friend, Margaret, told me about her granny, who worked at Prescott’s dry cleaners and how she had hidden ammunition and guns under the counter to be collected. 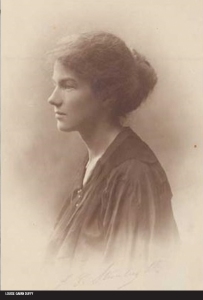 In many ways this sums up much of what we know of the women of 1916 – they were ordinary women, who did extraordinary things. Like their fathers, brothers and sweethearts, they followed through on their convictions and desire for a better future and were just as brave, scared, exhausted, hungry and extraordinary. So it is great that now during the centenary of the Rising we have the opportunity of recognising these women who fought, suffered, grieved, laughed while trying to make their world a better place.

The women of the Rising have not had as much attention over the years as the men.

However there were many women involved in the Rising, mostly through two organisations – the Irish Citizen Army and Cumann na mBan. The ICA,  led by James Connolly, explicitly included women as a point of politics. Connolly said “that no movement was assured of success that had not women in it”. Well known women who were in the ICA included Countess Constance Markeviecz, Helena Moloney, Dr Kathleen Lynn, Madeleine ffrench-Mullen. The other organisation was Cumann na mBan which formed at the same time as the Irish Volunteers in 1913 and was founded by women like Kathleen Clarke, Louise Gavan Duffy.

Members of Cumann na mBan combined two powerful ideological traditions, feminism and nationalism. Their stated aims in their constitution were:

They described themselves as allies of the Volunteers, not their handmaidens.

The women of Cumann na mBan were mobilised on that Easter Monday at the same time as the Volunteers. It is difficult to know how many women, both from Cumann na mBan and others mobilised and were active during Easter Week, estimates vary from around 180 to around 300. 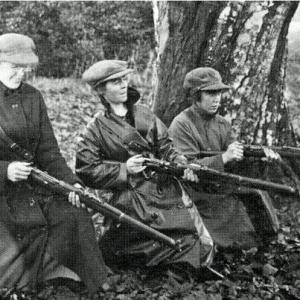 We now know a bit about what the women from the different organisations did. Some carried and used guns. Constance Markievicz was second in command at Stephens Green and the Royal College of Surgeons and was condemned to death with the other leaders for her role. She was spared because she was a woman. Rose McNamara was in charge of Cumann na mBan at the Marrowbone lane garrison. Many like Dr Kathleen Lynn, Brigid Lyons Thornton, and Linda Kearns ran first aid stations and gave essential medical care. Others women ran the kitchens and organised supplies. Louise Gavan Duffy, a founding member of Cumann na mBan, did not support the insurrection going ahead and marched up to Pearse in the GPO and told him so. She then agreed to work in the kitchens at the GPO. Many women did the dangerous work of communications, the telephone lines went down very quickly, so hand delivered messages was the only way to communicate between the different barracks/garrisons. Much of this work was done by women who could move around the occupied city easier than men. It was however still very dangerous and many came under fire. One important message was that of the surrender by Pearse. This was delivered by Elizabeth O’Farrell first to the British and then to the other garrisons.

The way that these women were remembered, or rather mostly forgotten, is also an important part of their story. 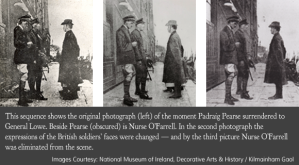 Now you see her; now you don’t.

For many reasons they have been largely written out of the story of the Rising, and the best example of this is the photograph of the surrender (at left) , which originally showed Elizabeth O’Farrell standing to the right of Pearse and was then altered to remove her.

Why were they left out? There are many possible reasons. In the aftermath of the founding of the Irish Free State, many men seemed to have felt that the actions of the militant woman were unfeminine, that they were shrill, harpies, unmanageable. Many of these women, including the widows of the executed leaders, opposed the Treaty that ended the War of Independence and ushered in the Civil War, meaning that after the end of the Civil War their connections to the Rising were often awkward and unwelcome.

Women volunteers were then denied pensions because it was initially decided that since soldiers were men, only men were eligible for military pensions. This incensed the many women who had fought, been wounded, lost their jobs, but the decision was not reversed until 1934 when women were allowed to claim for smaller pensions. It is also probable that many women were disillusioned that the high ideals for equality of women promised during the Rising and its aftermath were not realised in the Free State, so they disengaged from public life. Others seem to have felt that they had done what they had to do, and they then went on to work, raise families and not to talk about their experiences. There are many instances of children, nieces and nephews who only discovered their mother or aunt’s involvement in the Rising when clearing out their effects after their funerals. So now these women, like Margaret’s granny are being remembered. And it is in hearing their very individual stories that we can know and celebrate their brave actions.

One thought on “Airbrushed from History: Women of 1916”