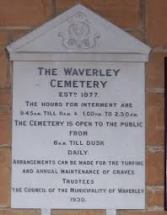 (For Lee and Eddie Dunn)

Not surprising either was a butterfly
lighting on my cheek, with commentary to boot:

‘Sure we’re here, Michael and Mary,
it’s a summer Sunday, Sydney, Awstrail-ya;
families enjoying themselves at the beach,
and this is Waverley Cemetery, a few miles
along from Bondi, a bus ride to the centre.
All you’ve read about us is likely to be true,
we’ve never had bad documentation though
that song embarrasses:

The stealthy soldiers followed, with ready blade and ball,
and swore to trap the outlaw that night in wild Imaal.

We saw you both enter earlier, a lapsed Catholic from Tuckmill,
a lapsed Protestant from Crowborough
exercising your freedoms – we like that –
we seldom get individuals visiting
mostly its big shots in respectful parties.
We followed your difficulties locating us,
your surprise at the size of the plot:
all big and bombastic isn’t it?
still you got here, flying in, what is it, 22 hours?
For us it was a 6 month sea voyage,
August 1805 to February 1806 on the Tellicherry
Cork to Madeira to Rio, to landfall at Port Jackson,
our ship’s indent, 126 male, 35 female convicts.
Inter-planetary arrival is what we went through
asking for days afterwards, where have they taken us?
The sheer scale of things natural, the ocean,
animals and birds never seen before,
the ravaging sun, an interior no one knew much about;
where were we indeed!
and us the wretches that we were,
reaching down to some common substratum
of defiance to keep up appearances
in a place deadly with official idiocies, oh yes.

As free settlers land is granted, we start making use
of implements I bought in Cork, we cultivate,
it’s a good time as we get attuned to
a distant outpost from a strong mother country;
a to-be-getting-on-with-it colony for convicts;
similarities between four countries outweighing differences;
tedious talk around firesides of things back home;
fresh talk in shebeen and field about our here and now;
acceptance that one day the place will be what we make it
and a slight, hard to detect reserve
about importing manners and money from London.

Then a new Governor, a Cap’n Bligh, a strange man
only properly at home in boats on mountainous seas,
now wades in among all the land based powers
of monopolists, corps of peace keepers, the Irish, the settlers,
the place gets jumpy and wouldn’t you know it,
our men get lifted, cast as plotters, a trial is arranged,
but this time our weapons are words, arguments,
the process is slow, but within a fair set of rules
they find no case to answer; the men to be released:

“The law sir, damn the law. My will is the law and woe
to any man that dares to destroy it.”

A kangaroo Court reverses all judgements,
Michael banished a thousand miles to Norfolk Island,
I go on the Quay to see him off but sent packing.
Unease continues, now more than an Irish matter,
Governor is arrested, sagacious types
begin to see this wrong headed man for what he is.
Our legal scandal one justification for suspending his powers,
the Court re-sits, upholds original judgements:
wasn’t I a divil to then set out for van Dieman’s Land
to give the men word of their pardons?
A new Governor, a Scot with two Irish lieutenants,
the place begins to become enlightened,

slowly before our eyes a nation is taking shape,
Michael gets made a Constable,
one afternoon Macquarie inspects local lands and dwellings
while wife Elizabeth becomes my special visitor,
we give her a real Wicklow welcome;
woman to woman we compare notes.

Homesickness was a wound but our dear children
in time helped us better relate to it all here,
days came when Cabramatta could have been Donard.
Michael – a marked and watched man from that day
he surrendered at Humewood –
was still prey to all that Wicklow wildness
when in his cups and came to grief a few times
but we survived and I, I outlived everybody,
a grand old dame around whom others consolidated.

Please don’t think us imprisoned here,
ghettoised among quaint bleached sarcophagi,
or in lists of heroic names carved in stone,
we‘ve transcended that, free spirits we are again,
out and blending with those older, more enduring spirits
of the Aboriginal people,
all in the air young people breathe here,
see for yourselves, go this afternoon
to the art exhibits along the cliff walks
see to-day’s republics of the soul,
battling too for their place in the way of things…’

and with that our beautiful intermediary was dithery away,
we had the selfie and with the place falling
into a not unfamiliar Sunday reverie, we soon
made the coastal way, picking up on the excitement ahead.

Tom Phillips grew up in West Wicklow only miles from where those referred to in the poem lived.   Over the years he has had work published in New Irish Writing, Cyphers, Honest Ulsterman,  Obsessed with Pipe Work, Irish Studies Review, etc. Tom worked as a teacher and lecturer in Sussex and Lancashire in Psychology and retired some years ago.  He has visited Australia twice, once to give a research paper, – and once, just to be there, and somehow managing to miss last year’s Melbourne Cup.

Source:   Upon the Mercy of Government  by Kieran Sheedy. Dublin: Radio Telefis Eireann. (1988)

One thought on “POETRY – Outlaws by Tom Phillips”