(With apologies to Robert Browning and Clifford T. Hall)

I saw a film at the Galway Film Fleadh last year which got me thinking. One of the characters in the movie had got into strife and made the decision to emigrate. There’s a scene at the airport where the guy walks through ‘Departures’ and then… that was the end of his character in this story.

How many Irish stories can you think of that end at the airport? I live in Sydney and for me and many Irish emigrants around the world, that journey through the ‘Departure Gate’ is not the end-point of the film script of our lives. For many of us it is just the beginning of the second act.

Thirty years ago I took the boat from Dun Laoghaire to Holyhead and got the train down to London. In WH Smiths in Euston station I bought a London ‘A to Z’ to find the way to Rotherhithe where my mate had a squat. As I flipped through the pages, a dishevelled middle aged lady leaned against the wall beside me, hitched up her skirt and pissed on the ground, spattering my rucksack. Welcome to London!

London was a good place to be young and unemployed in the ’80s. Unemployment benefit was generous and Ken Livingstone’s Greater London Council even paid my college fees. I paid the grand sum of £1 for my MA in film studies at St Martin’s School of Art in Covent Garden. There was a thriving squatting subculture which made it possible to survive on a pittance. 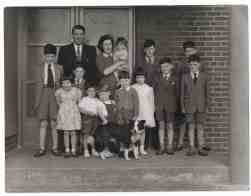 I got out of Ireland because I felt restricted by the possibilities in opportunities. I had a nervous breakdown during my last year in Trinity College, ramming a science degree down my throat even as I realised that I had no interest whatever in science. I did an AnCO course which involved some filmmaking and I was keen to learn more. London seemed like the place to go. I had some friends and an ex-girlfriend there who I still had feelings for. I had a very big family in Ireland. But I had to get away from them to grow in myself.

The IRA mainland bombing campaign was still active and anti-Irish sentiment was rife. In my first paid work on a documentary about the Prevention of Terrorism Act and its use against the Irish community, I met ‘Aunty’ Anne Maguire – one of the ‘Maguire Seven‘ who had been convicted in 1976 of terrorist offences alongside the ‘Guildford Four‘. I had never met a terrorist and assumed she would be a dangerous fanatic. Instead I found a gentle old lady, much like my own mum, whose life had been ruined by the injustice of the fitted up charges against her and the vicious smear campaign she had undergone at the hands of the British tabloid press. (Anne Maguire’s brother-in-law Giuseppe Conlon would later find unfortunate and posthumous fame as the ‘Father’ in the movie ‘In the Name of the Father’). I learned a valuable lesson, that governments lie. This may seem a given now but as someone who had idealistically followed their dad and 10 of 11 brothers into the FCA (Irish Army Reserve), this manipulation of ‘facts’ by governments was a big shock for me.

At one point I had a small job making a promo video for Hammersmith Council. In the course of the production I found myself in a playground trying to persuade a young girl of about seven to play on the swing so that I could film her enjoying the council facilities. ‘You’re Irish’ she said as she looked up at me. ‘Yes I am’ I said, hoping this pleasant bonhomie would get her to do what I wanted. ‘Irish are stupid’. she said. There were other sad reminders of where I came from, and where I stood in the pecking order of the Irish community. As young workers we were exploited, and very often we were exploited by our own.

As emigrants we were doubly screwed – by our country for casting us out to negotiate the vagaries of a foreign land and by our elders and betters who took advantage of our naivety.

When I lived in London I did not socialise within the traditional Irish community. One time I did venture to the Galtymore in Cricklewood on St Patrick’s night 1987. I stood in a doorway in the dividing wall between two enormous dancehalls. On my right was Big Tom and the Mainliners and on my left was Joe Dolan and the Drifters. The crowd was 12 deep at the bar. My good humour was short lived as I then witnessed one of the most savage racist attacks I have ever seen, outside a chip shop nearby. About six Irish lads kicked two black kids up and down the road. Then the cops arrived and arrested the two black kids. The Irish lads actually smiled when they came back into the chip shop to pick up their chips.

When I moved to Coventry in the Midlands 1989, I found I was meeting and mixing with the locals. I also discovered that rave music (and ecstasy) had filtered down to my social milieu which included football hooligans and petty criminals. In London a ‘coming out’ party celebrated the outing of a person’s sexuality to their family. In Coventry I was invited to a coming out party. ‘That’s nice that he can celebrate being gay’ I replied. ‘He’s not coming out as gay,’ said my mate. ‘He’s coming out of prison’.

In 1996 I travelled to Sydney to attend my brother’s wedding and never went back to England.

Sydney, of course, is very far away from England. But it was not until I moved this far from the UK that I realised how the pervasive anti-Irish feeling had been impacting on my life. In Australia, being Irish was usually something to be celebrated. OK, a lot of it may have been sentimental tripe but it was a sharp contrast to living in the UK when one was ALWAYS conscious of one’s accent due, in no small part, to the experience of being accosted by complete strangers and being told to ‘f**k off back where you came from’.

Australia is a country of contradictions. On the one hand, there are backward government policies on climate change and a refugee policy which is draconian. But my work as a filmmaker and community videomaker has given me an ‘in’ to so many communities over the years and it is  through this work that I see glimpses of what this country could become.

There is a scene in the 2005 Australian film Little Fish where Cate Blanchett, on the run,  accidentally walks in on a school choir who are performing in a school hall. The children are performing ‘Flame Trees‘ by iconic Australian pub rock band Cold Chisel. The innocence and beauty of that moment is so acute that it gave me shivers. In 2006 I was doing an oral history project in Minto, an abjectly poor area of Western Sydney. I came across a school choir of about fifty seven-year-olds, many recently arrived refugees and with no two of them having the same skin colour. The kids sang like angels, full of hope and innocence and optimism for their future while their parents – many with the marks of their previous tough lives etched on their faces, looked on with pride and no few tears. It is times like this that sustain me and make Australia a land of possibilities for me and now, my children.

On a visit home to Ireland recently, I tried to describe to a friend what it is like to meet – too briefly  – with friends and family before getting on a plane and flying 12,000 miles back home to Sydney. How can  those moments be described, when one re-joins the familiar family culture and indulges (and rejoices) in reminisces but then have to say goodbye?  In searching for the right words I was reminded of listening to my uncle, a simply spoken man from Belmullet as he recounted his memories of an ‘American Wake‘ from the Mayo of his youth. What struck me in his account was the despair of the parents as they said goodbye, in the knowledge that they were unlikely to see their offspring again. The modern emigrant goodbye is not like the ‘American Wake’ but it is a little like saying goodbye to a friend with a terminal illness. The grieving takes place over time so that by the time the end has come the worst of the sadness has already been endured. Each visit home is another stage in the grieving process which started on the day I took the boat.

Migrants are often the most conservative of populations. My theory is that their concept of their native land is snap-frozen the day they step on the boat and leave. For them Ireland is forever as it was the day that they left and that social order is set in stone. They do not adapt to progressive social orders in their adopted country but neither do they understand that, in the meantime, their native country has changed while they have been away. But the world is forever changing and immigrants change too. Or maybe the old ones just die off. When I returned to the Irish Centre in Camden again in the late ’90s I was amazed to see that many of the vestiges of conservatism had been blown away. The Irish gay group ‘Amach’ were holding a lesbian céilí. For ‘The Waves of Tory‘ instead of boys on the left and girls on the right the caller called out ‘butch’ on the left and ‘fem’ on the right!

The years have passed and I’m now one of those ‘older types’ whom I remember seeing around the Camden Irish Centre of old (though I don’t wear a pin-stripe suit). I sit on committees at the Sydney Gaelic Club and am involved in ‘keeping Irish traditions alive’. The organisation this year celebrates its 100 years anniversary.

The Irish Club in Brisbane closed its doors recently after 117 years partly because it failed to recruit the new generation of Irish migrants to its ranks.  (Little wonder when, as late as 2000, the club insisted on making its St Patrick’s Day dinner a ‘men only’ event!)

In the Sydney Gaelic Club however, the celebrations for the recent gay marriage referendum went on late into the night. It made me very happy to be a part of it. The Celtic Club in Melbourne is quietly thriving. A new generation of Irish have arrived in Sydney and Melbourne and Perth since 2008.  I hope they feel welcomed by the current Irish community whatever their colour, creed, sexual identity or religion!

Dr Enda Murray is Director of the Irish Australian Film Festival and a member of the Irish diaspora.
see: www.virusmedia.com.au; Secret Family Recipes;

This is an edited version of an article which appeared in the September issue of the Irish Echo.