An Interview with Perry McIntyre and Liz Rushen,

We, Perry McIntyre and Liz Rushen, met in the Globe Street search room of State Records of NSW in January 1996 when Liz had just commenced her PhD on emigration and Perry had recently completed her Masters degree on an aspect of emigration. With much in common and a mutual interest in colonial immigration, we decided that when we finished studying, we would write a book together on our research. That eventuated in 2007 when Quarantined! The 1837 Lady Macnaghten Immigrants, became the first book published by Anchor Books Australia, a small company we formed for this purpose.

It soon became apparent that there was a need for a small publishing company interested in producing quality books by less well-known historians.

Anchor Books Australia has grown significantly in the last eight years, diversifying from a focus on books on nineteenth-century immigration to broader historical, but always well-researched, topics.

The initial aim was, of course, to fill a gap in the market and it was significant that we established the company when several other small publishers were becoming less active, particularly with the then sense that printed books were doomed!

Anchor Books Australia has published several books dealing with Irish-Australian history, including Richard Reid’s PhD on assisted immigration from Ireland to NSW in the years 1848-1870 and Liz’s doctoral work on assisted female migration in the 1830s, both books addressing the fact that Irish emigration in the nineteenth century was organised from Great Britain. In our minds, the Irish in Australia have always been an integral part of Australia’s population since the first convict arrivals and they have continued to be major contributors to Australian life. The Irish have never been invisible, either as emigrants or as part of the population.

Anchor Books Australia does not focus exclusively on Irish-Australian history and has produced books on a wide range of topics: including a returned WWI soldier, a history of the Prom Country, an insight into convictism on Cockatoo Island, the affair of a Catholic priest in 1900, 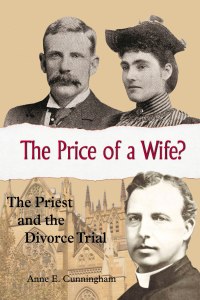 Two forthcoming books break further ground for us: one details Australia’s first political assassination, conducted by the IWW (the ‘Wobblies’) in outback NSW in 1916, and the second is an interrogation of a nineteenth-century diary written by a well-informed English immigrant woman, and conveys various aspects of her pioneering life and family.

We are very proud of all our publications. Interestingly, we commenced by publishing some of our own work, and this was to some extent in order to test the market and learn the craft of publishing. We now have a great team, including an Editorial Board of eminent historians, and all manuscripts are peer-reviewed by a Publications Committee.

While we welcome unsolicited submissions, we do not publish novels, even historically-based novels, or family history, and have rejected many manuscripts that fall into these categories and other books we feel are outside our province.

We are adamant that good history should be well-written and accessible to a general audience, but we insist on full and accurate citations and recommend our titles to individual historians, academic libraries and researchers in general.

Both Perry and Liz commenced their working lives as teachers and have much in common. However, their different skills and perspectives complement and enhance their roles. Perry, an inimitable networker, takes the broader view, while Liz focuses on the production aspects, but our views on accepting manuscripts are very much  team-decisions, with input from our Publications Committee.

Both Perry and Liz are high-profile historians and have served on many committees and boards in our respective States of New South Wales and Victoria. Liz was for several years Executive Director of the royal Historical Society of Victoria (2001-2004). They regularly attend academic conferences and speak to community groups within Australia and overseas, to hear of upcoming research topics and to continue to add to their cultural capital in their discipline.

As the historian involved in the Great Irish Famine Commemoration Committee in Sydney, Perry currently focuses much of her research effort on these young Irish women as an ongoing history project. She is also working on Irish convicts and broader aspects of 19th century immigration. Perry has served on the History Council of NSW (President 2005-2006), was a councillor of the Society of Australian Genealogists for 20 years and has also served as a councillor on the Royal Australian Historical Society, the Australian Catholic Historical Society and was Chair of the Great Irish Famine Commemoration Committee for three years. She is also involved in local history of her home suburb in Sydney where she is a committee member of Mosman Historical Society.

Liz divides her time between South Gippsland and Melbourne and is actively involved in the local history of both places. She recently completed a commissioned history of Melbourne’s Bishopscourt and continues to research and write about various aspects of nineteenth-century migration to Australia. She is currently a Senior Research Associate in the National Centre for Australian Studies at Monash University and on the Board of the History Council of Victoria.

While as historians we are both very involved in Irish-Australian studies, Anchor Books Australia does not focus just on Irish-Australian books. We hope all our books open up some different aspects of history to our readers. Much of what we publish depends on historians approaching us and all our books have been written by people who have a PhD in history or work in related areas such as heritage and local community history.

We firmly believe there is still a place for well-produced hard copy books, but we are also currently investigating e-books. Our books are designed and printed in Australia and we are committed to supporting the local industry. It is very much a hands-on business as we keep tabs on the process from the reception of the manuscript to the distribution of the book. We have a website www.anchorbooksaustralia.com.au with PayPal, direct debit and credit card facilities and encourage readers to view this site and support our endeavours to provide well-written and researched Australian history.

Liz Rushen and Perry McIntyre are professional historians who sit at the helm of Anchol Books. They have published history independently and also as co-authors of Quarantined! The 1837 Lady Macnaghten Immigrants.

One thought on “Anchor Books, an Irish-Australian Enterprise”