RRP: As well as the standard edition, there is a limited edition , signed and embossed with the number of the edition (up to 150), which includes a signed archival print, and a hand-built slipcase.  More information and order forms….

I have memories of myself,  in Brisbane, in a tiny Grade I classroom  that held just over one hundred children (how, I often wonder?), being discombobulated by a ferocious Presentation nun dissolving into tears. It was late in the year in the build-up. She was sweating profusely under her black heavy serge and linen wimple. She cried openly and wondered aloud whether we were worth the pain of having exiled herself from Ireland. She had come to save us, and we had fallen short. It was 1954. I was 5 or 6. She was probably in her early twenties, and I doubt she ever saw home again. I hope it was just a bad day, but fear her condition was chronic.  The same sadness infuses many but not all of the faces of the latest crop of Irish émigrés in the pages of David Monahan’s book of the exhibition.

This is a glorious edition, which adds a lot to the exhibition so many of us enjoyed at the Immigration Museum in Flinders Street as long ago as 2012. I’ve got the regular edition, and it’s handmade on heavy paper with the colour plates spanning two pages. The very monumentality of the production means that the monumentality of the original photographs are preserved. There is a limited edition on finer paper, signed and embossed with the number of the edition.  Printed by Nicholson Bass in Belfast, and designed by Niall McCormack, it is a work with impressive production values. 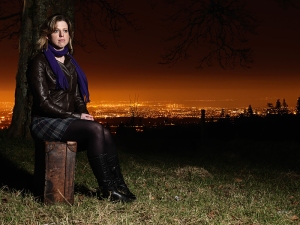 Claire Ryan. from the Dublin Mountains, en route to London.

There are 84 portraits, 54 more than in the original Melbourne exhibition, and in addition there are photos of loved places in Dublin and its environs which are evocative precisely because they are empty of people. They function as the emotional ballast of the volume, and seem to symbolise the heavy haemorrhage of people that occurred after the Celtic Tiger collapsed. At the other end of the volume, as if to counterbalance it, there are some smaller portraits in black and white, of transplanted emigrants, less formally posed and dressed, and although some faces register sadness or quizzicalness, many seem vastly more relaxed, posed in clearly un-Dublin-like settings in front of high rises, exotic launches, foreign beaches or cathedrals.

The de Paor family enjoying a day at the beach in New Zealand.

Many foreground children or pregnancy, as if to proclaim the reason for their choices. Some have even already returned to Dublin; others look as if they wish they could, even

if the background suggests ease and exoticism. 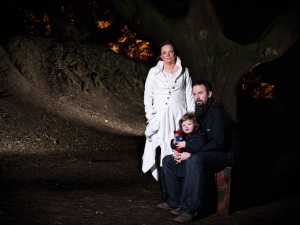 Julie Mitchell, on the eve of her departure for Vancouver.

The focus of the volume remains on the magnificent record of those about to leave, and while the poses are usually very formal, what one registers, particularly by contrast with the ‘after’ shots, is the tension in bodies. The faces never meet the gaze of the camera; they usually register their intent and the gravity of their decision to leave; the bodies are mostly tightly held, and give the impression they are about to leap up and into action (they are of course the ones who have taken decisive action, perhaps with a little help from those who declared them redundant); they are in a cone of darkess, often surrounded by empty seats or threatening cityscape signs or graffiti, one of which which proclaims the ‘shame + regret’ of their forced departure;  they are usually solemn and thoughtful, and often seem to depend on the ones with them for courage – the encircling arm, or even the choice of posing at some distance from one another (perhaps to register tensions within the partnership?); those who are alone seem especially vulnerable around their eyes, but jaws are often set;  and they have chosen with care their ‘beloved spot’, not always a lovely spot. The battered brown leather case, which so reminds one of the famine migrants, many of whom left with little more, is ubiquitous. The portraits are emotionally powerful, highly political (if one chooses to read them that way), and they tell stories. The commentaries are brief, punchy, to the point. They tell enough of the story to make one hungry for more narrative. It is wonderful to find out how they have fared, and frustrating when they are not to be found. There’s a dozen fantastic theses and books to be written about this cohort of migrants.

There is also a suite of scaffolding essays: a preface, a poem, essays personal and more academic by Piaras Mac Éinrí, Sarah Maria Griffin, Jennifer Redmond, and David Monahan, and some appendices. David wears his heart on his sleeve in talking about the need to make return easy for these people, and also for avoiding the very painful experiences of the nineteenth- and twentieth-century cohorts of migrants. The age of accepting, like Malthus, that death and emigration are natural safety valves for economic stress and over-population are over. He welcomes moves to legislate for the dispossessed, for the right for the diaspora to have a say in elections, and the appointment of a Minister with Responsibility for the Diaspora.

The essay by Piaras Mac Éinrí reminds the reader that worldwide only 3% of the global population live outside the place of their birth. That figure may have risen since the book was published. That means most people live with the expectation of never doing so. This puts this class of émigré into a very exclusive coterie of brave and adventurous, or desperate, folk. Ireland, of all westernised nations, has felt the pressure of local as well as global financial pressures more than most, not only recently, but since the eighteenth century, in a series of pressure points –  which include the Famine, the Depression, the post-war period, the 1980s, and more recently since the GFC in 2008. Many of them well-educated.  While emigration is relatively simple; immigration is far more regulated than it used to be, so Irish migrants’ job-preparedness, education and experience make them very acceptable migrants to host countries like Australia and Canada and the USA. Most are economic migrants (a term of abuse in Australia where they must often wince); they are the well-qualified who lost jobs, or those who were priced out of jobs when the corporates went elsewhere in search of  a less expensive workforce. He offers a disheartening statistic: 40% would like to return but only 20% think it likely that they will.

Mac Éinrí eloquently unpacks the range of responses (other than nostalgia) but also feelings of ‘discouragement, treachery, anger and guilt’, not only on the part of s/he who leaves, but those left behind.  He even canvasses the very subversive idea that forcing people to emigrate might be a way of keeping Ireland more conservative and protecting the lifestyles of the middle-class. These are tough and divisive debates. Is it good for the Irish workforce to be a global one? Does it serve interests at home to send them away? Are the migrants’ remittances to family at home a useful source of hard currency still? Or is it something for the Irish state and/or bankers to be ashamed of?

Jennifer Redmond’s essay blends history and historiography with a personal narrative. She also asks tough questions: reflecting on emigration as the defining feature of Ireland since independence, as something ingrained in the Irish national psyche, she wonders if it is a ‘slow failure’ of Ireland’s post-independence economy.  This is a disturbing thought.  As someone who refuses herself to be a victim, she and her partner had built the conditions via education to a high level in Ireland, to create a brilliant future in the US. That’s not to say that had she had more control over her future, she may not have preferred the opportunity to stay in Ireland in the job she was educated to do. It was clearly a painful decision, because not a free one, and the photographs in this book  have the power to easily reignite and touch that anguish.

Sarah Maria Griffin’s article takes up some of the issues Mac Éinrí  raises in a more personal, and similarly edgy, way. She laments being forced into the stereotypes, both mocking and infantilising, and the sterility and limitations of others’ dictating this clichéd way of being. But she also knows, with discomfort, that as a white migrant in the US, she is privileged in ways that foreign language speakers, Latinos or black faces are not. Going back, as she has done, when home is now somewhere else, is not quite home. Hers is a restlessness that is ontological and perhaps may have become a chronic condition, like my young nun’s? Her poem, ‘American Wake’ was reproduced in the Irish Times.

The Bridge of Tears (near Muckish mountain) on the road to the Derry Boat is no longer the heartbreaking opportunity for an ‘American wake‘ that it used to be in the era when most Irish migrants left never to return. There is Skype, the internet, and there are cheap airfares which can take the emigrant home in 24 hours, generally speaking. But there is still the sense of having a foot in two worlds and never being entirely at home in either.

Frances is one of the Tinteán editorial team.

2 thoughts on “First the Exhibition; now the Fine Art Book”