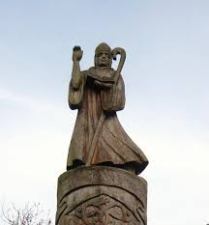 A unique Litany in Irish, preserved in a manuscript prayer book scribed by Dáibhi de Barra in 1833, is now in the State Library of Victoria, presented by the controversial Father John Barry when he left Melbourne in 1863.

In an article in the 2014 issue of The Australasian Journal of Irish Studies, co-authored with Constant Mews, Julia S Kühns, we discussed the contents and significance of this litany. Val Noone’s reference to the manuscript in Hidden Ireland in Victoria brought the litany to our attention. Much of the book seems to contain relatively standard prayers but when we looked at this litany, with the help of an on-line reproduction, we discovered its unique content. It varies the expected list of saints in two important respects: the addition of Franciscan saints and the addition of Irish saints.

Saints Patrick, Columba (Colum Cille) and Brigid, the important national saints, are no surprise. More remarkable is the addition of Barra (Finbar), Eolan and Mochuda (Carthage) to the section for apostles. These reflect the Cork origins of the book. We don’t know whether the choice reflects Dáibhi’s own preference, or his unknown source. He has been described as translating copies of prayers from an English prayer book, but other items in this book confirm that he is prepared to add his own contributions.

The little-known Eolan is remembered locally as a father-confessor to Finbar, patron saint of Cork. Mochuda is a more affectionate name for Carthage (Carthagus in the Latin texts) and the one used in the Irish language sources for his life. He is not a Cork saint, but presumably gets his place as an important saint of the larger district of Munster. (He is one of the Munster saints commemorated in the splendid windows of the Honan Chapel in Cork.)

St Carthage, best known around Lismore in Ireland, was designated patron saint of about twelve churches in Australia and New Zealand. (see: Tinteán)

The latest of these, in Royal Parade, Parkville, was originally a ‘church of ease’ for St Mary’s Star of the Sea, West Melbourne, built by its then Parish Priest, Reverend John Norris. According to Archbishop Mannix’s eulogy, Norris had a particular affection for this church, named for this saint who was important in his own part of Ireland. St Carthage’s became a separate parish in 1956.

Some members of the church community decided to celebrate 80 years since Archbishop Mannix laid the foundation stone with a celebration at 2 p.m. sharp on Sunday 24th May, culminating in a public recital of the litany, led by Miriam Uí Dhonnabháin and Siún Uí Mhaoldomhnaigh. (The Irish response is easily learnt). Miriam will also introduce the scribe, Dáibhí de Barra and sing several songs associated with him and with the saints of Munster.

The celebration will include readings from the early Latin and Irish accounts of Carthage’s life, especially in relation to his expulsion from Rathan and the journey with his community of monks and lepers to Lismore. Chris Watson and Val Noone will read several poems, and Maryna Mews will conclude the occasion with a Latin hymn by Peter Abelard. Constant Mews, Medieval History specialist at History at Monash University, and other readers will provide background information at various points.

Afternoon tea will be provided afterwards at the parish house. There will be a collection at the church entrance to cover costs.

Since retiring as Lecturer in English at La Trobe University, Chris Watson has followed his interests in Irish language, literature and history.

One thought on “Recital of unique Irish Litany.”