A FEATURE by David Crawford

Sons of Erin – Some members of the Monash Archaeological Society at Warrnambool. David Crawford (3rd from left), Dave Carroll (6th from left) and Max Keating (on the right).

One of the many clubs and societies at Monash University in the ‘sixties was ‘The Sons of Erin’ founded in 1967 by three students: Max Keating, Barry Larkin and Dave Carroll. All three were proud of their Irish ancestry and were keen folksingers. The aim of the society was to celebrate Australia’s Irish heritage and its influence. They formed a group and played guitars, mandolin and lagerphone. Their repertoire included Irish rebel songs (e.g., ‘The Foggy Dew’, ‘The Rising of the Moon’) humorous songs (e.g., ‘Finnegan’s Wake’, ‘McAlpine’s Fusiliers’ and ‘Seven Drunken Nights’), sentimental songs (e.g., ‘The Butcher Boy’), convict songs (e.g., ‘The Black Velvet Band’), emigrant songs (‘The Leaving of Liverpool’, ‘Bound for South Australia’), bushranger songs (e.g., ‘The Wild Colonial Boy’ and ‘Good old Ned Kelly’), and shearing songs (e.g., ‘The Lachlan Tigers’,  ‘The Ryebuck Shearer’). They were fans of ‘The Dubliners’ (Max even resembled Luke Kelly!), Danny Spooner and Gordon McIntyre, and Gary Shearston. Another member of the society was Liz Bruckner who was married to the owner of the Dan O’Connell Hotel in Carlton, at the time a home of Irish folk music. The ‘Sons of Erin’ had over twenty student members from various faculties, and they held many enjoyable parties where they entertained with their songs.

During 1967, Monash decided to abolish some of the Clubs and Societies because they were considered too frivolous to subsidise and one of these, unfortunately, was ‘The Sons of Erin’. Dave Carroll suggested that the ‘Sons of Erin’ could be reincarnated under a different name. Dave’s grandfather at Killarney had talked about a ‘Mahogany Ship’ in the sand dunes sighted by many locals in the 19th century until it was completely buried in a sand storm in 1880, never to be seen again. Dave suggested that they form ‘The Monash University Archaeological Society’ and organise an expedition to try to find the mysterious wreck. The University liked the name and approved the new society. To learn archaeological methods, members of the group attended Victorian Archaeological Society digs at Keilor where the ancient remains of the Aboriginal ‘Green Gully Man’ had been found. 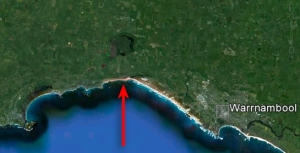 Meanwhile we researched the Mahogany Ship. The last official search for it had been a University of Melbourne expedition in 1910 which located two ancient metal spikes which we discovered had been kept in a cardboard box that had lain for decades almost forgotten in the Warrnambool Library. One of the leaders of the University of Melbourne expedition was George Gordon McCrae who wrote about it in the Victorian Historical Society Journal.

According to McCrae, the best clue to the ship’s location was a bearing taken by Port Fairy Harbour Master, Captain Mills, who said that the ship lay in the sand dunes on an imaginary line drawn from the top of Tower Hill through the ‘old iron church’ and continued to the beach. We found an old map which showed the old iron church was situated near the entrance to Tower Hill Reserve so we were able to take our own bearing for the ship’s location.

Deep excavation of the sand dune in progress.

We had a theory as to how an ancient ship could have ended up high in sand dunes. We thought that centuries ago the course of the Merri River might have shifted and its mouth might have then been where the Killarney lagoon is now. We speculated that the ship could have been a Spanish ship exploring what lay in the southern hemisphere and could have sailed up the river for careening and somehow got stranded. As the coastline at Killarney advanced, the ship was progressively left high and dry in sand dunes. Careening – the process of removing accumulated seaweed and barnacles from the hull of wooden ships – was an essential feature of seaborne life for many generations and an important motivator for sailors to stop – even on an unknown coast.

Now that we had an idea of the Mahogany Ship’s location, a group of over twenty students set out in the 1968 term one holidays to try to find the Ship. To assist us we had a device which we borrowed from a construction company that detected underground solids. We started walking over the hummocks on Killarney Beach and on one large dune we were excited to see the detector register metal at regular intervals. We were convinced we had found the site because one of the 19th century sightings had been by a group of duck shooters on the Killarney lagoon who walked into a valley between hummocks and saw the wreck high up on a dune on their right. This seemed to fit our location perfectly. 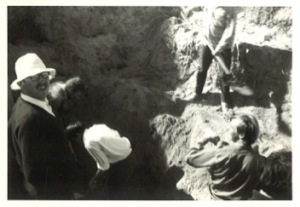 That evening, thinking that we were about to make a major discovery that would rewrite the history of the discovery of Australia, we decided to celebrate in the nearby Killarney Hotel.

Going into its tiny bar with its log fire burning and maps and pictures of Ireland on the walls was like being in Ireland, more so because the men and women inside (whom we found out were local potato farmers) spoke with distinct Irish brogues and were singing Irish songs. The transformed ‘Sons of Erin’ felt right at home. We were teased by the locals who claimed that the Mahogany Ship had been broken up for fire wood over the years and one even claimed that his mantelpiece came from the ship.

The last day just before the spike was found. (Barry Larkin on the left)

We commenced digging with shovels and borrowed a wheelbarrow from one of the nearby farmers. While we were at work, a journalist from the Melbourne ‘Herald’ took photos for an article. A week later we had dug away half the sand dune. Augurs were inserted but nothing solid was hit. On the last day we were about to quit digging when we heard a clink. A shovel had hit something metallic and a metal spike was unearthed. Full of anticipation, we returned to Monash to have the spike dated but to our dismay, the Metallurgy Department declared it was no older than the 19th century because it had been cast not forged. It had probably come from a cart travelling along the old coast road. This disheartening report brought our searching for the Mahogany Ship to an end.

Monash University, however, was delighted with the publicity the Monash Archaeological Society had received in the ‘Herald’ because it counteracted some of the adverse publicity Monash had been receiving for student protests and sit-ins of the Administration Building.

But Killarney had another role to play in my Monash life. In Fourth Year History I had to come up with a topic for a thesis and, remembering the night in the Killarney Hotel, I decided to research the history of the Irish settlers of the Tower Hill district.

David Crawford is a retired school teacher. His thesis on the Irish settlers was titled, ‘The Irish at Killarney and Koroit, 1841 – 1881 is: Their Economic Progress and Social Life (with special reference to the Farnham Survey)’.

5 thoughts on “The Sons of Erin and the Mahogany Ship”