A NEWS item from Genevieve Rogers

Of the many weirdnesses annually thrown up by the Eurovision Song Contest, this year’s Irish selection process has been widely hailed as one of the more bizarre and memorable.

According to one commentator, the 2014 Eurosong selection on RTE’s The Late Late Show was ‘a shambles’. Another described it as ‘car crash TV’ and yet another as ‘a farce’ with all the cringe-worthy fascination of DNA test night on the Jeremy Kyle Show. Oh, dear. I would like to say that those are harsh judgements but, having seen the footage, I have to say that I could barely bring myself to look past a certain point.

That point was the moment when former Eurovision winner, Linda Martin, hauled herself up to full height on her stilettos and bore down on Billy McGuinness, mentor to Laura O’Neill, a Eurovision hopeful taking part in the selection process. Depending on your perspective what followed was either unedifying spectacle or ‘TV gold’.

McGuiness’ crime was to challenge the impartiality of the commentary panel (who, incidentally, could comment on the acts but not vote), in particular of veteran local industry figure Louis Walsh and, by association, of Linda Martin herself. McGuinness had telegraphed his dissatisfaction publicly through the media during the week prior so it was hardly a State Secret that he was not a happy camper going into The Late Late – as it is known.

A verbal stoush developed over his allegations of nepotism and escalated to a physical face-in-face confrontation just short of blows, causing host Ryan Turbridy to stand between Martin and McGuinness while the selection proceedings ground to a halt. So far, good old-fashioned Irish Eurovision passion and exuberance, you might think.

But there was more.

As tempers flared Martin called McGuinness ‘an odious little man’. Fair enough. It could have been worse! In that state she could have said anything! Well, actually she did. Not content with ‘odious’, and with her Paddy well and truly up, she then, single-handedly and in a mere moment, augmented European linguistic diversity by following up with ‘Gobshite!’

A stupid, foolish or incompetent person.

The collective expression for ‘gobshites’ is ‘a shower of gobshites’, according to my sources.

In the YouTube age, Linda Martin and ‘gobshite’ became the talk of the international Eurovision community – fans, bloggers, journalists and podcasters. For a couple of weeks the net was fairly showering ‘gobshites’. And this previously relatively unknown addition to the international lexicon was greeted – not with condemnation or bewilderment – but with relish, with howls of delight, and with outright enthusiasm. There is something endearing – though I’m pondering what – about ‘gobshite’. It has colour, precision and stand-alone novelty – no adjectives needed. A gobshite is a gobshite – and such a person would be in no doubt once identified as same. No dictionary required. It is one of those words that enacts its meaning. Great cràic for the broadcasters – and, in the speedy way of the internet, ‘gobshite’ has already become a shorthand way of referring to the whole 2014 Eurosong debacle. And there is hardly a Eurovision podcaster who can resist…..

Had it all stopped there honour might have been salvaged – maybe. But where there is a fire there is often a pyromaniac who will pour petrol on it. Re-enter Louis Walsh. His contribution to the debate was to accuse Billy McGuinness of being affected by certain unnamed, reality-distorting substances. Not helpful at this point – and not something that RTE could allow itself to be seen endorsing. Host Turbridy hastily indicated something to that effect after a break – during which no doubt Legal had been in his earpiece! Phew!!

McGuinness may well have had a point. If so, it has been lost in all the shenanigans. The problem with his involvement may well be one of time and place rather than of substance. The real cost of the stoush, however, may have been to his act, Laura O’Neill, whose performance was completely overshadowed by the antics of her elders and betters. We can never know what toll was taken on her in the way of nerves – or of just losing the will to live – while all this was going on. She did not win – but there is no way of knowing whether causation is at play here, one way or the other. Just put it down to experience, Laura! At least your future is ahead of you – which is more than can be said for some involved….

You would think, wouldn’t you, that that would be enough for one night, one year, one selection process? You’d be wrong. As I sit here, it’s the truth! When the televoters of Ireland, those hardy souls who had endured the ‘gobshites’ and the rest, bravely invested yet another ounce of trust in Eurosong 2014 by voting, there was a computer glitch which obscured the result for some time. The computer would not count above 99 – and the scores exceeded that limit. You couldn’t make it up! 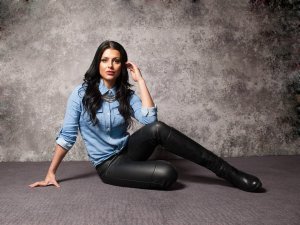 * Ireland will be represented at the Eurovision Song Contest in Copenhagen on 6th, 8th and (hopefully) 10th May 2014 by Can-Linn, featuring Kasey Smith singing ‘Heartbeat’.

Genevieve Rogers is a retired teacher and solicitor, author of Territory Kids A Memoir.…. and Eurovision fan.