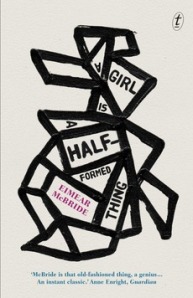 Eimear McBride: A Girl Is A Half-Formed Thing, Text Publishing, 2013.

It took six months to write and nine years to find a publisher. Eimear McBride’s first novel, A Girl Is A Half-Formed Thing, won the £10,000 Goldsmith’s Prize. A prize established

to celebrate the qualities of creative daring … and to reward fiction that breaks the mould or opens up new possibilities for the novel form.

Set in rural Ireland during the ‘eighties and ‘nineties, Mc Bride says the novel is about a girl

… already an outsider in the village where she finds herself growing up, she becomes further alienated from those around her by her mother’s evangelical Catholicism, the schoolyard bullying of her brother and, after a sexual experience with an older family member, her own increasingly chaotic sexuality.

The act of reading the stream of consciousness of A Girl is a Half-Formed Thing forces the reader ‘into character’: seeing, smelling, and hearing as if s/he is the protagonist. McBride describes her narratorial voice as

‘pre-consciousness’ because it is situated back at an earlier point, just before thought becomes formative.

The raw, authentic voice may have been influenced by Mc Bride’s theatrical studies, but her theatrical ambitions were put aside in favour of writing after the death of her brother as the result of a long battle with cancer.

The reader moves with the symbolically unnamed protagonist from infancy to the age of twenty. The syntax is fragmented and ungrammatical, and yet, a highly appropriate and  powerful conveyor of the novel’s themes and issues. The experience of the ‘unformed’ mind is rendered with clarity and lucidity:

Not there, I walked around and around. That house had up hill and down dale. Steps and mud. Those wellies red. Umbrella. Wondrous being dry. See fat drops plop and runlike a river down for flies. Spiders.

The language is so finely wrought; it brilliantly conveys an immediate actuality for the reader. James Joyce is greatly admired by McBride, above her desk is the following quotation (from a letter to Harriet Shaw Weaver):

One great part of every human existence is passed in a state which cannot be rendered sensible by the use of wideawake language, cutanddry grammar and goahead plot.

I went in. I knelt next to by your bed. I put my face in the hook of your left arm. I said please please you help me. I thought. I knew. You’re dying soon. I wished for you. All be very good. Your life was better that it been I said I love you. Please tell me you love me. You sleep.

It is an intense and loving connection that contrasts to the alienation and disconnection that pervades every other aspect of her life. Her relationship with her mother is grotesquely deformed by her mother’s evangelical Catholicism, as was her mother’s, by her father. It seems as if the more she is is buffeted about by the vagaries of existence; the more zealously she grasps her faith. Mc Bride does not tell us this, or engage in reflection, she simply plunges the reader into a raw and authentic experience utilising fragmented and jumbled syntax that surges with anxious energy:

Ah Mammy sorry. Sorry. Please all you say. She have you by the jumper. Slap you harder. Slap and slap and slap. Push you in the corner. Mammy. Mammy. Getting red face. Getting sore face.  Slap again she. She again. Screaming. You imbecile. You stupid. I cupping all my blood nose in my jumper.

McBride’s lexical choices are simple and refer to the concrete world, the use of the present tense alludes to a world where individuals, like the protagonist, her brother and her mother are impotent, without control or volition. It seems all are compelled to bear the blows life delivers. However, while the mother constantly calls to God and lives for the ‘hereafter’ and expects no ‘control’,  the daughter is caught in an almost nihilistic existence, as is conveyed with acerbic pithiness at her grandfather’s funeral:

Carried up to the graveyard and lowered him down. Throw a rose on top. His daughters. More at him than on. Rub their shoulders sons-in-law. He’s buried. Under the muck. The end. Go on there get in your hole. Amen. And. Amen.

Notions of guilt and sinning are etched in the formative psyche of the protagonist struggling to control her life, to define herself in a family and a community that has already defined her solely as an object that is both lustful and inspires lust. Her sexual encounter with her uncle at thirteen, confirms the attitudes of both her mother and grandfather (influenced by dominant Christian perspectives) that women are the source of evil in the world. Indeed there are many events in the novel that parallel well-known events in the Bible, for example, when she dances like Salome on a bar:

I’m dancing, dancing, twirl my head. On the bar in my slip shoes.

…Kick of that glass. Kick that one. Into the wall….

The protagonist struggles to gain control within the narrow defines of her sexuality imposed by the world she lives in and becomes a predator, in a pathetic bid to overturn the ‘victim’ scenario. She hunts with a girlfriend: ‘Will we have him for lunch?’ McBride wanted to make a point about the attitudes to women she encountered in West Ireland. She believes that “casual sex was sold to women as a form of liberation.”

There is a disturbing escalation of sadomasochistic activity which will confront many readers, early on: ‘Some hurt me with nails on my face.’ Later, she urges men to punch her. For a moment, toward the end of the novel, the use of capital letters within words highlights the acute intensity of brutality of her sexual encounters and forced me to scrunch my eyes shut to block out the pain and fear, while paradoxically compelled to force my shutters open and read on.

This novel is inspiring in terms of its original narrative voice, devastating in its depictions of the brutal consequences of social and cultural paradigms that restrict the role of women, yet ironically, a celebration for the compassion it ignites in the reader. I am delighted and excited to read that McBride is working on a second novel.

Andi is a Melbourne-based teacher of Literature.