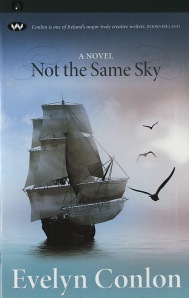 A chance remark from an exasperated teacher who cannot engage her in the finer points of mathematics prompts Joy Kennedy to embark on a successful career as a stonemason near Harold Cross Cemetery in Dublin. At a time mid career she is ruminating abstractly on whether she wants her life to change when a letter arrives from Australia inviting her to create a memorial to 4414 Famine Orphan Girls, shipped to Australia between 1848 and 1850.

A small group of these girls, whose average age is sixteen, is the subject of this lyrical and captivating story by Evelyn Conlon.  It is 1848, during the Irish Potato Famine, when they find themselves as part of a contingent of 200 girls at the port of Plymouth in the south of England.  They are destined for the new colony, initially as domestic servants, and hopefully later to marry and add to the white population of the Colony.

The historic context of this story is interesting, and it provides a graphic account of life aboard ship, the Thomas Arbuthnot, throughout the three-month journey from Plymouth to Sydney. But it is mainly a story about the human spirit, and the capacity of the young to embrace the future and all its challenges. The surgeon Superintendent of the ship, Charles Strutt, was a humane and enlightened man, for the times, and this was to be a blessing for these young girls ‘who had not yet begun to be what they might have been’.

The pain of separation manifests throughout the journey with the girls still grieving for those who have died or have been left behind, and most of them devise mechanisms for dealing with their ordeal. It is a telling moment in crossing the equator when they discover that in Australia, even the night sky is different to Ireland.

The absence of choice in their predicament creates its own kind of freedom, and there is a Zen-like quality to the way in which they embrace everyday life. ‘Some take up a new profession, that of making the best of it. They would polish this profession, and its gleam would crystallise to form part of the national character of where they were heading.’ This simple statement illustrates the depth of Conlon’s perception of the legacy of those who helped shape the Australian character, and a tribute to those who inhabited an era when over forty percent of white Australians were Irish.

Apart from mentioning the difficulties the journey and housing in Hyde Park Barracks presented to the girls, when experiencing female cycles for the first time, Conlon does not dwell on the savagery meted out to convicts in the same establishment, rather leaving the graphic details for a later historic visit by Joy Kennedy. However, the sensibilities of a girl, who was literate, and whose mother was well versed in Brehon Law, thanked the storm that ‘took her mind off the savagery of what had happened to her and the girls around her.’

The paths followed by the girls are evolutionary, rather than planned, and their basic values and belief in themselves stand most of them in good stead. Not thinking of the past is their key to survival, and any who dwell on the past do not make it.

It is the ongoing concern of Charles Strutt for the fate of the girls that gives us an insight into how their life paths developed, and the beauty of the thoughts in Honora’s last letter;

This passage reminded me of a day with my children in a paddock in Gippsland when I felt very homesick. The children were playing on a hillside, and all of a sudden their laughter filled my head, and I looked around me, and could see land as far as the eye could travel, no barriers, no buildings, absolute quiet and for the first time I loved this new land too.

My last accolade to Conlon is the way she has woven the story so that the final tribute to these girls, especially to Bridget who did not get a chance to be what she might have been, is inspired by the storks and the formations of migrating birds.

Renée migrated from Dublin to Australia in 1959, via London where she married. She was marooned in Brisbane, found solace in Melbourne and started a dynasty. She is a graduate of University of Melbourne.

One thought on “Birds of Passage and Orphan Girls”