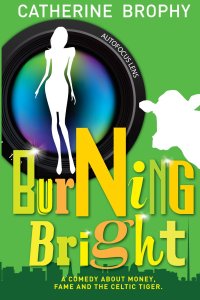 As laconic Aussie battler Darryl Kerrigan began his bemused journey to the High Court of Australia (‘The Castle’ 1997) his distant Irish cousins, the Kerrigans of Balfathery in the Irish Midlands, were embarking on their own wild ride on the Celtic Tiger.

In the period bookended by the breakout commercial success of ‘Riverdance’ and the collapse of the Irish economy (1994-2008) Ireland more or less lost its head. All things ‘Celtic’ suddenly became cool on the back of an overcharged economy and Ireland became exceptionally, if briefly, fashionable. In the words of Grandma Minnie Kerrigan,

‘At last we’ve got our chance at the high life. And who could begrudge us?
We’ve had our fill of history and famine… It’s time to par-ty!’

No one seriously begrudged them but someone should have warned them about the inevitability of the hangover. The heady mix of easy money, new confidence and coltish energy threw up the usual predators on unexpected prosperity – improvident bankers, opportunist criminals and property developers, aggressive pursuers of self-interest. The Irish, though, were suddenly having far too much fun to notice.

Catherine Brophy captures the intensity of the times in the title, ‘Burning Bright’, and follows up with a fast-paced, multi-voiced account of the Kerrigans of Balfathery and their odd assortment of friends and hangers-on. At the heart of the story is Kirsty, Pride of the Kerrigans, a girl/young woman whose sense of entitlement is so gravity-defying that you know, almost from the outset, that she must eventually fall to earth.

Kirsty’s ambition is to be the Paris Hilton of Ireland – although she briefly raises her sights during a stint at fashion college to Stella McCartney – and she is prepared to do anything and to use anyone to achieve it.

Kirsty’s chief enabler, her doting father Eamon, is a property developer who pays back the slights, real or imagined, from a Barrack Street childhood by building a mansion of dizzying designer splendour in which he entertains lavishly and from which he branches out to Resort development in Romania. Kirsty is his ‘Princess’. Her mother Marian, a yoga devotee with her own Book Club, wants an education for Kirsty but undermines her own credibility somewhat by baking marijuana into garlic bread, goose stuffing, chocolate brownies and gazpacho – to chill out Kerrigan family gatherings.

Kirsty’s brother Jake, her friend Lala, family friend Fergus and her three surviving grandparents complete the line-up, orbiting around her Coming of Age trials in varying degrees of self-awareness and plot significance. The story is told by each of the characters in turn: each perspective is distinctive and fertile ground for ironic musings on Kirsty’s brittle quest for celebrity.

Old Ireland and Celtic Tiger Ireland battle it out in the insights of Kirsty’s grandmothers:

Nana Jo: There was no such thing as homosexuals in Ireland till they brought in the cable television.
Grandma Minnie: Tiz far from Jacuzzis we were reared but we can take to them easy enough.

Jake adds his own chorus-like perspective: ‘Dream on, Kirsty. Dream on.’

Oblivious, Kirsty ploughs on because she can’t help herself and because, as she believes, ‘[she’s] worth it!’ Her transit from Midlands obscurity to youtube notoriety is littered with broken relationships and tested friendships. She leads us through the ills of globalised youth culture and modern living – Big Brother, a brush with Madonna, STDs, pornography, attempted rape, drug dealing, HIV/Aids, monumental extravagance and wasted opportunities – and is none the wiser – almost till the end.

The end, when it comes, is redemptive – but only slightly. Planet Kerrigan, it transpires, is built on a secret known to Tracey O’Hagan, daughter of Ireland’s biggest drug baron. Tracey, who has misadventures of her own to deal with, is not about to hold back when push comes to shove. As Kirsty’s ‘be careful what you wish for’ world comes apart, Tracey unleashes the secret and shatters any remaining illusions.

To Kirsty’s bemusement, the flourishers and survivors in her world are the measured, the unentitled, the un-self-obsessed, in the form of her hard-working brother Jake and her unpretentious friend Lala. Shattered, as opposed to humbled, Kirsty very tentatively decides to try some of that for herself.

Brophy has a good eye and ear for the excesses of the Celtic Tiger – the Kerrigan crest at the bottom of the pool; Tracey’s rare Siberian tiger coat; hand-made Belgian chocolates shaped like baby Jesus ; Grandma Minnie’s delusional ‘It’s like a beautiful dream – except it’s real’; and Nana Jo’s portentous ‘…make no mistake God is watching and a reckoning is coming’.

Her television-writer background is evident in the episodic arrangement of the narrative, occasionally at the expense of the climactic, but the pace is fast and there are enough absurdities and laugh-out-loud moments to go forward with. Though the Celtic Tiger and its aftermath are serious matters, the touch is deliberately light and the aim at the funny bone rather than the cerebral cortex. This is not a book for scholars but for students of human nature with a taste for frailties writ large. It is for summer afternoons by the beach rather than for winter evenings by the fire, with enough of all of us at our worst in the characters to remain engaged. Even Kirsty Kerrigan at her most slappable!

A point of interest for Antipodean readers: Brophy is of the school of Northern Hemisphere writers who send inconvenient characters to Australia – in this case Tracey O’Hagan’s mother who is doing time here for ‘grievous bodily’ and a gay man whose father lies about his whereabouts to conceal the shame. If it was good enough for Dickens ….

Ultimately the Tiger breathed its last, and with terrible consequences. Nana Jo’s warnings of doom trumped Grandma Minnie’s party time. The Eamon Kerrigans came to earth with a thud and are still picking up the pieces. Pity Eamon hadn’t kept in touch with his cousin Darryl, a man truly rich in family, friends and life’s bounties, who would surely have advised, at the start of the whole misadventure, ‘Tell him he’s dreamin’ ‘.

Genevieve is a former teacher, solicitor, and the author of Territory Kids, a memoir about children who grew up in New Guinea.